Posted in Building on a Budget on February 5, 2009

ello, and welcome back to Building on a Budget. I had the pleasure of participating in the Conflux Prerelease in Philadelphia. I opened a powerful Sealed deck with Nicol Bolas, Planeswalker and Hellkite Overlord. I'd like to thank everyone who made their way out to the PA Convention Center this weekend for an awesome Prerelease. I'd especially like to thank everyone who came over to play some games in between their rounds. This set seems like it's going to be a lot of fun, and I'm glad I got to share my first journey into the world of Conflux with such an enthusiastic crowd.

I hope everyone did their homework. If you recall my article two weeks ago, I suggested that all of us pick out an undervalued card from Conflux and attempt to build a deck around it. Before I left Philly, I made sure I had four Scarland Thrinax to build my new Torrent of Souls deck.

I look forward to people sending me their favorite Conflux cards with explanations! 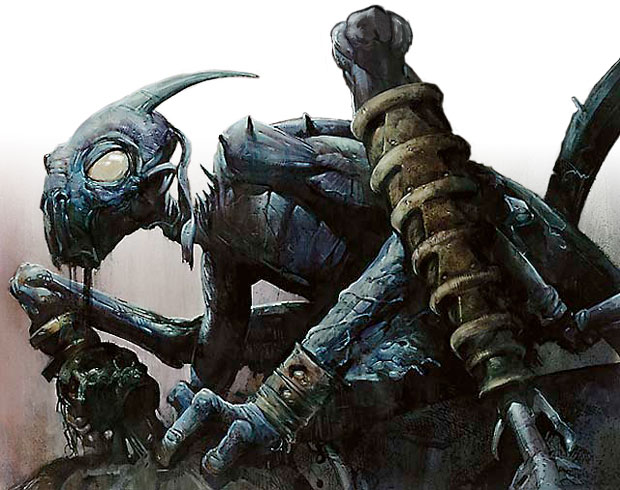 Nantuko Husk is my second favorite creature of all time. (My all-time favorite is, of course, Mystic Snake.) The ability to sacrifice creatures at instant speed is surprisingly relevant in a world of "Cryptic Command bouncing your guy and drawing a card." What makes the Thrinax even more exciting is the list of cards that it's in Standard with.

Nantuko Husk: Being able to play as many as eight Nantuko Husk / Scarland Thrinax makes a big difference. Decks that abuse the Husk's sacrifice outlet haven't seen much play. It seems sketchy to run things like main-deck Threaten, Unwilling Recruit, or Sarkhan Vol when you can only play four Nantuko Husks. Now we have the Husk/Thrinax setup that can really make our deck exciting.

Threaten, Unwilling Recruit, Sarkhan Vol: The ability to "Threaten" your opponent's creatures and sacrifice them to a Nantuko Husk is a tried and true strategy. If you recall the 2007 U.S. Nationals there was an exceptionally powerful red black deck that made this play very regularly. Expect cards with these type of effects to rise in popularity with the conception of the new Nantuko Husk, Scarland Thrinax. Sarkhan Vol would be especially powerful in these archetypes with his ability to grant haste to a fresh horde of tokens. For example, it's turn five and I already have a Sprouting Thrinax and a Sarkhan Vol in play. I play Scarland Thrinax and a Dragon Fodder, sacrifice Sprouting Thrinax to Scarland Thrinax, activate Sarkhan Vol's +1 ability, and swing for 14. Sarkhan Vol is clearly too expensive to make the cut in our budget decks, but it's important to understand how strong he may be in this archetype.

Sprouting Thrinax: An obvious inclusion in a deck like this. This Thrinax is 2009's Promise of Bunrei and should be treated with a similar high regard. The card helps defend against Wrath of God effects and allows you to "combo" people out on occasion.

Torrent of Souls: Torrent of Souls is one of the most powerful Standard-legal cards. There was some buzz about it last summer when it caught a lot of Nationals tournaments off-guard and took home the trophy. The card has absurd synergy with so many of this archetype's effects. I can sacrifice my Sprouting Thrinax and get some tokens, and then use a Torrent of Souls to bring it back and have each token swinging in for 3 and the Lizard itself coming in for 5. I didn't even take into account the size of the Husk or Scarland Thrinax that sacrificed the Sprouting Thrinax in the first place.

Bone Splinters: This may not have what it takes to make the cut, but Bone Splinters has a lot of synergy with the new Threaten effects.

Turning this deck into something budget will take a little bit of work. First I'm going to make a list of the cards we're definitely playing.

Nantuko Husk and Scarland Thrinax: Two obvious inclusions in a deck that's built around their effect.

Torrent of Souls: The trump card. Games are won with Torrent of Souls when it seems like there is virtually no chance of winning. A misers dream—I'm looking at you, Jamie Parke.

After we have this information, we can just fill in the blanks with other cards that abuse the mechanics available.

Dragon Fodder: My love for Dragon Fodder has dimmed quite a bit since its printing, but it's still the best budget two drop available for a deck like this. It may not be Mogg War Marshal, but it still makes two guys for one card.

Goblin Assault: This card may have gained a lot of value. I was never overly enthused over it. I spoke with my friend Ervin Tormos in Memphis about his inclusion of it in his 5-1 Standard deck. He explained that it was very powerful. His opponents wouldn't attack him because they didn't want the Assault to get out of hand. This seems like an ideal situation to be taken advantage of with Threaten effects. The card also makes great friends with a Nantuko Husk, Scarland Thrinax, or Torrent of Souls + target.

Threaten: Unwilling Recruit isn't manageable in a three-color budget deck. Sarkhan Vol, as I mentioned, is nowhere close to budget. Luckily for us, Threaten is easy on the wallet, and it's actually castable. A solid removal spell.

Marsh Flitter: Marsh Flitter is a very powerful token-producer with a sacrifice outlet attached. This outlet may not seem particularly relevant, but all your Goblin Assault tokens and Dragon Fodder tokens can also be used to make Marsh Flitter a 3/3. I start to sweat a little bit when I think about Threatening a Chameleon Colossus and then sacrificing is to my Marsh Flitter.

Hunting Triad: Probably the weakest card in the list thus far. I felt the deck needed more in the way of token production. I like Hunting Triad a lot because of its versatility, Combat becomes very difficult for opponents when they know they need to be playing around the reinforce mechanic.

I want to be playing a good number of lands in a deck like this. I'd like to play some Treetop Villages in a deck like this. I can afford to play a lot of lands that come into play tapped. My only turn two play is Dragon Fodder, everything else is turn three and later. A play set of Savage Lands seems like an obvious inclusion. If I look at the mana requirements of the deck it comes out like this:

I can use this information to make this mana base.

Conflux isn't available online, but my brother was available for a games to make sure the deck was worth its salt. 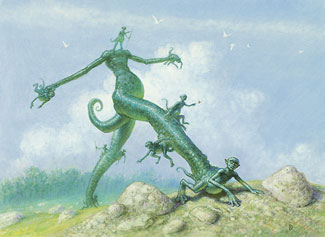 Game 2: I kept Treetop Village, Mountain, Swamp, Dragon Fodder, Goblin Assault, Torrent of Souls, and Nantuko Husk on the draw. Matt led things off with a Treetop Village. I drew Sprouting Thrinax, mirrored his play, and passed. Matt played a Wren's Run Vanquisher showing me Wren's Run Vanquisher and passed. I drew another Torrent of Souls, played my Dragon Fodder, and passed. On Matt's turn he attacked for 3 and played another Wren's Run Vanquisher, showing me Civic Wayfinder, but missed his third land drop. I drew Threaten, played my Sprouting Thrinax, and passed. On his turn Matt drew a third land and used it to play Civic Wayfinder, finding a Swamp. I drew Savage Lands, played it and my Nantuko Husk, and passed. On Matt's turn he played a fourth land and Chameleon Colossus. I drew another Treetop Village, played Threaten on Matt's Colossus, attacked with the Colossus and my Thrinax, and brought Matt to 13. Notice that I made this attack to induce a swing back from my brother. If he took the bait and swung with even one guy, he would die to the return attack with my Torrent of Souls. On Matt's turn he thought forever before attacking with both of his deathtouch 3/3s and dealing me 6. He played another Civic Wayfinder and passed. I showed him my pair of Torrent of Souls, and he scooped. 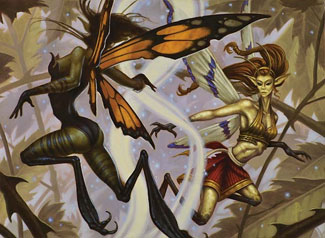 Game 1: I let Matt play first this time. I mulliganed on the draw and ended up keeping Savage Lands, Savage Lands, Mountain, Scarland Thrinax, Threaten, and Marsh Flitter. Matt mulliganed to five on the play and started off with a Faerie Conclave. I played a Savage Lands and passed. Matt kept things gangsta with a turn-two Bitterblossom. I simply played another Savage Lands and passed. Matt made his token, played another land, and passed. I played my Mountain and attempted to play a Scarland Thrinax, but Matt had the Spellstutter Sprite. On his turn he drew, attacked for two and passed. On my turn I drew a swamp, played it and attempted to play Marsh Flitter, it resolved. At the end of my turn matt played a Scion of Oona. On Matt's turn he attacked with his horde of 2/2 flyers and I blocked one with my Marsh Flitter, I sacrificed a token and the Marsh Flitter survived. Matt played a fourth land and passed, then played a Mistbind Clique during my upkeep to tap me down. I drew a Torrent of Souls and passed. On Matt's turn he played Agony Warp on my Marsh Flitter and attacked for 10, bringing me to 4. I drew for my turn and didn't find any help, and he won the next turn.

This deck is a lot of fun, and I hope you find the time to try it out. Shoot me some emails with your pet cards and hopefully I'll get to write about them in the coming weeks. I hope all of you had fun at the Conflux Prerelease.

Happy brewing time, and see you next week!

Posted in Building on a Budget on February 5, 2009