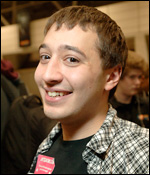 he Standard metagame was turned on its head this past weekend. The first two weekends of Standard with Avacyn Restored foretold of a format dominated by Red-Green Aggro and Wolf Run Ramp strategies. This week, Brad Nelson and Lewis Laskin showed up at two different high-profile tournaments playing a mono-blue Grand Architect deck designed by Nick Spagnolo, one of the best deck builders in the world.

Lewis made it all the way to the semifinals of the StarCityGames.com Standard Open in Orlando, where his opponent, John Cuvelier, was able to win with some exceptional draws and even more exceptional play. Brad found himself in the finals of Grand Prix Minneapolis, where he lost to Christian Calcano's innovative Blue-Red Delver deck. 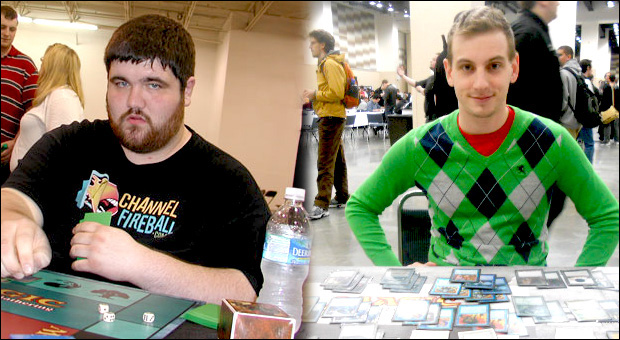 It's clear the dust hasn't settled since the release of Avacyn Restored. There's still plenty of room for innovation.

Today, I'd like to look at Chris Schafer's deck from Grand Prix Minneapolis. I highly doubt anyone expected Blood Artist to be sitting at 9–0 after the first day of competition. We'll start by taking a look at his decklist.

2 Go for the Throat 3 Tragic Slip 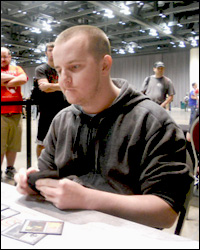 This deck is a great starting point for someone looking to build a highly competitive Standard deck on a budget. Birthing Pod has never been more easily acquired. You shouldn't have trouble trading a rare land or two for a play set.

Gravecrawler and Geralf's Messenger are still in medium demand. However, both cards are relatively easy to pick up through trading. I understand that both of these are somewhat above the curve for Building on a Budget, but both cards are necessary to the deck's functioning and nothing in the deck besides Gravecrawler, Geralf's Messenger, and Birthing Pod should be difficult to acquire.

The deck reminds me of a Boggart Shenanigans deck Sam Black used to win a car at Worlds in 2007. The deck is incredibly aggressive; it has the ability to win a lot of its games simply by casting 2-power creatures for one mana and attacking before the opponent has time to establish a board presence. Usually, players piloting creature-based decks are forced to stabilize with slightly bigger creatures and a clogged board state. Eventually, the bigger creatures will have enough of an edge that the player will begin attacking and eventually win the game. However, that strategy doesn't work very well when the hyper-aggressive deck has four copies of Blood Artist and Birthing Pod. Schafer's Zombie deck can aggressively trade and whittle away his opponents' life totals long after they establish superior board presence. 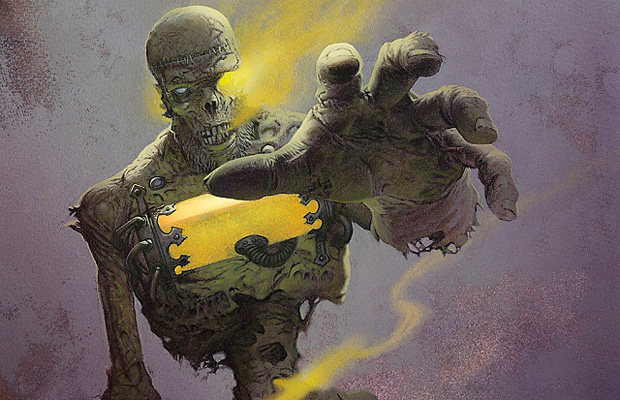 I'm going to build a mono-black version of the deck. I'm already using a good amount of value on Geralf's Messenger, Birthing Pod, and Gravecrawler, so the addition of rare lands and mythic rares like Falkenrath Aristocrat would put this deck out of a respectable budget range.

Chris Schafer's list takes advantage of Zealous Conscripts and Falkenrath Aristocrat, and both of these cards give the deck some interesting angles. I'd recommend a small splash of red if you can afford a play set of Blackcleave Cliffs and a few copies of Dragonskull Summit.

I decided to take a tour of Standard-legal black cards using a Gatherer search and I was pleasantly surprised with the options available for the mono-black version of the deck.

Black Cat might seem like it's too cute, but this card is actually quite good in a deck like this. Random discard is a deceptively powerful effect—it can haphazardly mana screw an opponent, pluck a single Primeval Titan, or nab your opponent's only removal spell. Yes, there's a small chance that any specific one of these things will happen, but there's actually a very good chance that at least one of them will occur. Perilous Myr was Schafer's only way to get value out of going from two to three with a Birthing Pod chain; Black Cat gives the deck a new and powerful angle of disruption.

Gloom Surgeon is a nice way to block Strangleroot Geist forever, but I'm not sure I can justify a card that encourages harshly stalled board states when I don't have Zealous Conscripts to break the stalemate with great efficiency. I'm going to play a single copy because it's nice to have access to this sort of thing in specific situations, but I don't think I can justify all four the way Chris Schafer could.

Gravecrawler is incredible in a strategy like this. It's especially strong with Birthing Pod. Once we've found these two cards, we can begin making the game a nightmare of inevitability for our opponent. Every turn, we can activate our Birthing Pod, sacrificing Gravecrawler and fetching up another copy of Blood Artist. We can use Gravecrawler's ability to return it to the battlefield, thus acquiring a free Blood Artist every turn. The more Blood Artists we've put into play, the more this interaction passively drains our opponent.

Bloodline Keeper is a great option against Red-Green Aggro. Aggressive red-green decks don't play with Incinerate or Brimstone Volley anymore, instead favoring Galvanic Blast and Pillar of Flame. Pillar of Flame is quite good against us, but it ends up looking pretty silly when we have a 3-toughness flier that can flood the sky with a bloodthirsty army. Blood Artist happens to be a Vampire, so we might find ourselves flipping Bloodline Keeper into Lord of Lineage more than we otherwise expected.

Entomber Exarch can be searched up the turn before our ramp opponent has access to six mana, hopefully plucking the only Green Sun's Zenith out of his or her hand. It's also worth noting the Gravedigger ability is quite strong in a deck that relishes in "unfavorable" trades.

We're not playing red, so Zealous Conscripts isn't really an option when it comes to five-drops. Precursor Golem gives us three bodies that are big enough to survive most removal that's being played right now. The token production has a lot of value when our Blood Artist plan is taken into account.

3 Tragic Slip 2 Go for the Throat


I'm going to talk about the matchups you're likely to face and hopefully offer some insights into how we can make our deck well-equipped to take on the current Standard metagame.

These players are going to try to be the aggressors here. Try to lean on them for the first couple of turns. We have a better mana-to-damage output until they start leaving their Strangleroot Geists untapped to block. Black Cat is only good in the earliest stages of the game, so we're probably going to take those out in favor of Gloom Surgeons. Entomber Exarch is going to come out against every non-ramp/non-control deck. They're going to have artifact removal after sideboarding, so Precursor Golem, despite its massive effect on Game 1, will become more of a liability. They're likely to chain Phyrexian Metamorphs and Green Sun's Zeniths in an effort to have a lot of Strangleroot Geists; we can take advantage of that with a few copies of Sever the Bloodline.

We need to be as aggressive as we possibly can without setting ourselves up to lose if they have Whipflare or Slagstorm. This can be difficult, but Geralf's Messenger and Gravecrawler do an excellent job. Bloodline Keeper is particularly weak here because they can wipe it off the board along with the rest of our team for only three mana via Slagstorm. We're going to want more targeted discard. The ramp decks need to draw both correct halves of their decks to function properly. A well-timed Distress or Entomber Exarch can ruin their game plan.

The deck is well positioned against most variations of Delver. We should try to maintain an aggressive game plan and always trade when given the opportunity. Precursor Golem and Bloodline Keeper are weak to Vapor Snag and Perilous Myr isn't very exciting. We should do well against them in games where they don't have one of their better draws on the play, which beats just about everything.

Frites will only beat us if they manage to get Elesh Norn, Grand Cenobite onto the table. We need to make sure to play aggressively and destroy all their mana creatures. We should always do race math and find the line of play that kills our opponents in the fewest number of turns. Frites doesn't have spot removal to interact with our combat math and their stalling tool, Lingering Souls, doesn't match up well against our Blood Artist plan.

They will expect you to outright lose to chained Wurmcoil Engines. Their clones are exceptionally strong against our Geralf's Messengers. We're going to need to take Wurmcoil Engine out of the picture if we want to have a fighting chance. A play set of Sever the Bloodline is, without any doubt, the best way to deal with multiple Wurmcoil Engines. Precursor Golem and Bloodline Keeper are weak to Vapor Snag. Perilous Myr is also of minimal value. It might be worth trying to bring in all our discard spells, but I'm not sure and that plan requires testing.

Here's how the deck looks once we have a reasonable sideboard:

3 Tragic Slip 2 Go for the Throat


The deck is well positioned for the current Standard metagame. It's a blast to play, and if you haven't ever played a deck with Blood Artist then I strongly recommend putting this together and giving it a try at your local FNM. Be sure to shoot me an email with feedback or suggestions for future columns. I might continue working on this deck in the coming weeks if I get positive feedback via emails and the forums.