A New Twist on KCI

ast week we explored Martyr of Sands as a potentially killer card for a new Extended format. The deck aimed to control the game with massive life swings and the end-game combo of Thopter Foundry and Sword of the Meek. Unfortunately, I still have not gotten a chance to play my Martyr Foundry deck in real life yet. My girlfriend's birthday party interfered with the Extended tournament! 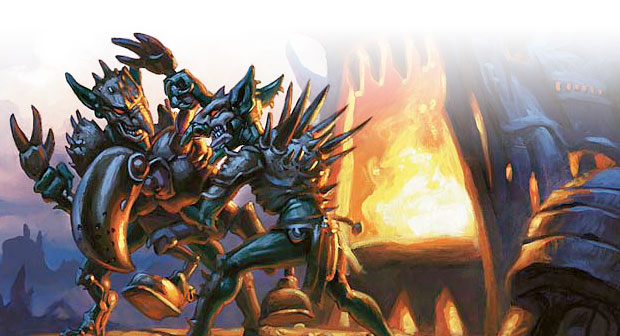 A lot of people sent emails to me suggesting that I make a more combo-oriented version of the deck. Sword of the Meek in conjunction with Thopter Foundry is a very inexpensive way to win a lot of unwinnable games.

If you find yourself doing this at a tournament, you can call a judge and demonstrate your understanding of the infinite loop. Generally speaking, the judge will allow you to choose an arbitrarily large number to set your life on and divide that number by two, giving you that many 1/1 Thopters. For example, Spike demonstrates his understanding of the infinite loop to his opponent and the local judge. Spike sets his life total at 200,000,000 and has 100,000,000 Thopters. If Spike's opponent has a mass removal spell or an infinite combo of her own, then Spike can set his combo off again at any point as long as the combo pieces are still on the battlefield. For example, Spike's opponent creates infinite mana with Freed from the Real and Bloom Tender, then uses this mana to shoot a Fireball at Spike for 1,000,000,000 damage. If Spike still has the Krark-Clan Ironworks, Thopter Foundry, and Sword of the Meek on the battlefield, then he can simply go off again and set his life total at 2,000,000,000. The Fireball will resolve and Spike will have 1,000,000,000 life and 1,000,000,000 thopters.

Another card that was mentioned a great deal was Time Sieve. You can take infinite turns with Thopter Foundry, Sword of the Meek, Time Sieve, and five lands. Again, the deck we worked on last week doesn't really want to splash a third color for a card that is probably only good after the deck is already winning, but this deck might.

You have Thopter Foundry, Sword of the Meek, Time Sieve, and five mana producers on the battlefield. You use the Sword of the Meek / Thopter Foundry interaction to create five tokens. You sacrifice the five tokens to Time Sieve and take another turn. Rinse and repeat. Eventually you will draw more lands and find yourself netting a few 1/1s every turn. This army will eventually grow large enough to kill your opponent. Most people will concede when they realize they aren't going to get another turn.

These new versions of the deck may not be as tuned for a specific metagame, but they are certainly more flashy. Ideas swirled in my head for the past few days, and I thought about making a dedicated combo deck with the new pieces. This deck will probably not be the greatest creation for tournament play, but I'm sure it will garner a following if we go about this in the right way.

Card selection and disruption seem to be the biggest problem areas for most combo decks that get sent to me. I want this deck to feature a healthy amount of card draw / selection and a strong element of disruption to fight through our opponent's defenses.

Muddle the Mixture was a great card selection spell that doubled as a counterspell in key spots last week. I thought about Fabricate, but I'm not sure the ability to search for Krark-Clan Ironworks trumps the ability to disrupt your opponent's key instant and sorcery spells. After a good amount of thought I settled on Muddle the Mixture, but true Johnnies can use Fabricate to try for the more consistent infinite combo.

When Thoughtcast is playable, its absurdity is unmatched. Last week's deck didn't have enough artifacts, but this week I don't see Thoughtcast for one blue mana as too much of a stretch. Even if you're paying two mana for a "draw two," it's still far better than anything else. I want this deck to have access to four of this spell.

Duress is classically powerful. You trade one mana and one card for a potentially dangerous card and a lot of information. I want at least four cards like this in the deck and I think Duress is probably our best option when we take our budget into consideration. If you have access to a Thoughtseize, then it would probably be correct to swap Duress for Thoughtseize one-for-one. The ability to pluck away Tarmogoyfs to survive an early onslaught is usually better than having 2 more life.

Old KCI decks used Serum Visions and Thirst for Knowledge to augment the Thoughtcast, but these days we have access to Ponder. Ponder seems like a solid improvement. Thirst for Knowledge is obviously strong, but I'm not sure if this list will have room or time to be spending three mana on anything but a combo piece.

The deck will probably be blue and black, so our mana base will have to change. I would like to include four Seat of the Synod and four Vault of Whispers to make the Thoughtcasts more accessable. I also want a good amount of other mana acceleration; Talisman of Dominance, Dimir Signet, and Pentad Prism all seem like good options here. I want to play Underground River to make the deck more consistent. I've explained before that Ice Age pain lands have significantly fallen in value since the release of Magic 2010, and I feel they can find homes in a lot of budget Extended decks. Again, if you can't afford the pain lands, they can probably be replaced with basics and it won't be too much of a problem.

Academy Ruins is probably the most important thing to happen to this deck. If you've played Extended in the past year, you probably know that this is one of the best tools available to any control player. It creates an inevitability that can't really be matched.

I wanted some removal spells to help us survive into the late game. Executioner's Capsule seemed like a really nice fit here. It lowers the cost of our Thoughtcast, it can be sacrificed to our Thopter Foundry or Krark-Clan Ironworks, and it can be recurred with Academy Ruins. Those all seem like really nice incentives. One Echoing Decay and one Doom Blade work as silver bullets that can be tutored up via Muddle the Mixture.

I thought about the deck a lot and eventually settled on the following list:

Last week's deck looked like a masterpiece on paper, but this did not really do it for me. The deck is pure combo in its essence, so I decided to goldfish a few games with it and see what happened. The deck seemed pretty powerful and relatively consistent. I noticed that a lot of the games would probably be won without ever having to cast the Krark-Clan Ironworks or Time Sieve. Having KCI in the deck makes some draws unbeatable, which is obviously a plus. I don't really want to touch the combo pieces or disruption because the packages seem pretty well put together right now. The big glaring weakness of the deck seemed to be Pentad Prism. I thought the card would provide a good boost to the deck's acceleration into the KCI combo. Pentad Prism does not accelerate the deck enough to jump the turn-four hurdle, and a land does just as well in getting us to that turn-four kill. The land is better in the spots where we have to win with our Thopter Foundry and Sword of the Meek alone. The deck also seemed to have little to no mana problems, so I decided it could do without so much. This is the new list I worked out.

I sleeved up the new list and took it for some test drives against crash test dummies. The new list seemed like it was much better at achieving the deck's goals. I think the deck may benefit from a third and fourth copy of Thirst for Knowledge, but I'm not sure what we can cut right now. This version of the deck seems like it could be very competitive in a new Extended environment.

Here's the sideboard I'm working on:

Darkblast seems like a solid answer to the Kataki, War's Wage problem we have. Negate is a card I love having in my board; there are a ton of situations where a simple Negate fits a match-up better than a specific card in the main, I like having two of a card like this to fill the gaps. Withered Wretch is a tutorable answer to decks that abuse graveyard mechanics like dredge. Spellstutter Sprite continues being awesome in every format ever. Relic of Progenitus is added hate against a combo deck that happens to be faster than us.

I hope everyone enjoyed this Johnny-riffic version of the Sword of the Meek / Thopter Foundry combo deck. The deck only plays six rares, and only two of them are necessary to the function of the deck. This deck is capable of going infinite as early as turn four. The deck is a powerful option for new players seeking to tackle an older format.

4 Martyr of Sands 3 Ranger of Eos

2 Proclamation of Rebirth 4 Thirst for Knowledge