Night of the Knights

lot of people got excited when Knight Exemplar was printed in Magic 2011. At the time, there weren't enough Knights to make the card a serious contender in Constructed tournaments. Mirran Crusader and Accorder Paladin certainly help the cause, though. I've received a few emails since Mirrodin Besieged was released that asked if I would go ahead and build a Knight deck. 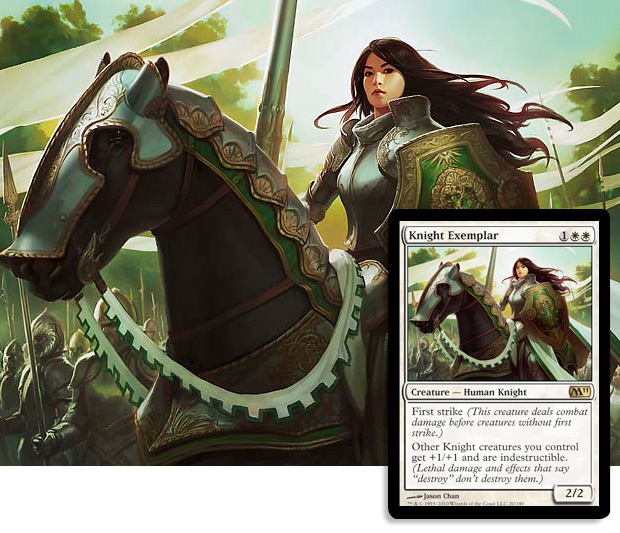 A quick Gatherer search of Standard revealed some pretty awesome Knights that were ready to be sleeved up.

Student of Warfare has been around for a while. This is one of the best one-mana creatures ever printed. It attacks for 3 on turn two without any help. Seems fair! I've always been a huge fan of cards like Figure of Destiny, Kargan Dragonlord, and Student of Warfare. These cards are always good, regardless of the game state. They're good in you opening hand and they're good on turn twenty. No matter the board state, it's always beneficial to draw them. Student of Warfare isn't too difficult to acquire, and you shouldn't have much trouble trading for a playset.

Caravan Escort is significantly less exciting, but it is another one-drop. It may take a lot more work to level up, but you'd be surprised how often you have extra mana that can be dumped into the Escort's level up ability.

White Knight has always been good. A Standard Knight deck has enough first strike that you can easily prevent your opponent from attacking profitably with a Grave Titan. White Knight helps guarantee that you'll be able to swing through it also.

Accorder Paladin is one of my favorite cards from Mirrodin Besieged. It's a 3/1 for two mana! That's already a good enough reason to play it. Throw in battle cry and this thing gets downright ridiculous. The battle cry mechanic is especially strong when you have Knight Exemplar in play. You can carelessly charge your team into the red zone and rely on the indestructibility granted by your lord to protect them regardless of how large your opponent's team may be.

Leonin Skyhunter is another all-star. Having a flying Knight lets you block Squadron Hawks all day. If you have a Knight Exemplar in play, then your opponents won't even want to attack with their "Sword of Feast and Famine" Squadron Hawks. The evasion is very strong against other creature-based decks.

Knight Exemplar is the whole reason we're trying to make a Knight strategy work. Knight Exemplar pushes the limit of abilities granted by a lord. Becoming indestructible is about as high up on the ability foodchain as you can get. Truly ridiculous things start happening when you have two Knight Exemplars on the battlefield. Each copy will make the other indestructible. It shouldn't be long before the additional power and toughness let you plow through to victory.

Mirran Crusader is the best thing that could have happened to this archetype. It has double strike, so the pump from the Exemplar is even more valuable. It has protection from green and black! This card isn't too hard to get as I write this, and I'm actually worried about it skyrocketing in popularity and being hard for readers to acquire.

Hero of Bladehold is another Knight that makes this deck really mouthwatering. Giving this fine hero a Knight Exemplar to stand by is really some work of beauty. Honor of the Pure gets absolutely bonkers when you start attacking with this. Some games seem like a wrap when your opponent sweeps away creatures guys on his or her fourth turn, but a single Hero of Bladehold is enough to force an opponent to have another board-sweeper. This thing does a lot of damage very quickly.

Honor of the Pure really pushes this deck over the top. The deck is literally just a pile of white creatures, so this card has A LOT of value. It's especially strong with Hero of Bladehold and Mirran Crusader, because their abilities get an extra bonus from the power and toughness boost.

Night of the Knights

I played a few games with the deck to see how the Knight deck fared against the big guns of Standard. 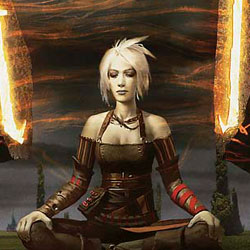 I drew another Plains, cast another Knight Exemplar, and attacked with my team. My opponent chump-blocked the Accorder Paladin and took 8, but gained 3 from the Lifestaff. My opponent cast a Squadron Hawk, searched for three Squadron Hawks, equipped the Lifestaff, and passed the turn. I drew a White Knight, played my land, and attacked with my team. My opponent blocked a first striker, but forgot about the battle cry trigger, and soon realized that the game was over. 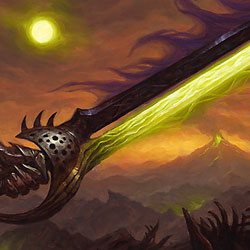 I drew a Plains, played it, cast Leonin Skyhunter and Knight Exemplar, and passed the turn. My opponent used Jace's last counter to bounced my Knight Exemplar, then cast another Jace, the Mind Sculptor, played another Celestial Colonnade, and attacked with Squadron Hawk. I tanked for a bit and decided not to block. This turned out to be a huge mistake, as my opponent cast Gideon Jura, upped its counters, Brainstormed with Jace, and passed the turn. My opponent was kind enough to show me a stacked hand and I gladly packed it up and went to Game 3. 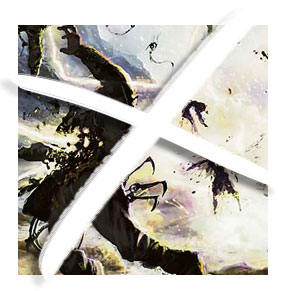 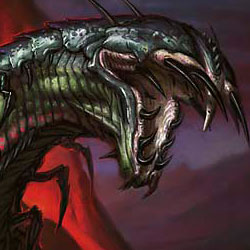 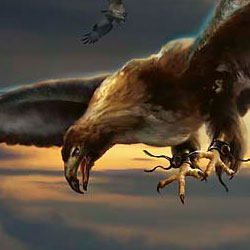 I played more matches with the deck and found that it had very good matchups against the nonblue decks of the format, but it had some trouble with White-Blue Caw-Blade or Blue-Black control. If those decks aren't a big part of your local metagame, then this could be a great deck choice.

A lot of readers that asked for Knight decks had pointed out that Kinsbaile Cavalier was absurd in an Extended Knight strategy. I threw this list together and it looks pretty amazing on paper:

Kinsbaile Cavalier gives every Knight a massive bonus. Accorder Paladin does a lot of damage when attacking with double strike. If you're looking for a fun Extended deck that does surprisingly well against most of the field, then you should definitely put this list together.

As always, I'm open to suggestions for my next column. Be sure to hit the forums or send me an email with any questions or comments.