ello, and welcome to Johnny Week. Who is Johnny? Johnny is someone that likes to play with crazy combos or strange card interactions. Johnny uses his deck to express himself. I am, in a lot of ways, a Johnny. I play strange decks because I enjoy the thrill of experimenting with cards that are rarely played together.

This week I want to talk about a deck that was originally conceived by a complete unknown in a Magic forum back when the Magic 2010 spoiler first went live on Gatherer. The deck was originally received very poorly; almost every post that followed was some comment about moving the deck discussion to the casual forums. I remember seeing the list and being immediately struck by its resilience and power.

I called up my best friend, Chris Lachmann.

"Hey buddy. I just saw this awesome deck that takes like ten turns in a row with Time Sieve and kills people with Tezzeret."

Chris and I played a bunch of matches with the deck and were really impressed with the way it handled Five-Color Control and creature based decks. Chris and Brad Nelson (FffreaK on Magic Online) were working on an Elf Combo deck that seemed promising, but I was ready to sleeve up the Time Sieves for Nationals.

The next weekend changed everything, though. Elves and Faeries seemed to dominate every National Championship, and those were clearly the worst matchups for my Time Sieve list. Jonathon Loucks had written about the Time Sieve deck, which really hurt the surprise factor. I couldn't really figure out how to beat the Elf deck and I kept getting comboed out on turn four. I ended up switching at the last minute to a Naya deck designed by Brian Kowal.

The Naya deck is not a budget deck, but I've recieved over two-hundred e-mails asking for the deck list in the past week. Here's what I sleeved up for Nationals:


This deck was completely under the radar. It accomplished everything I wanted for Nationals. It was favored very heavily against Elves, Faeries, Jund, and the Merfolk decks that did well in the last chance qualifiers. It seemed to be pretty even against Five-Color and Blightning. Its only real weakness was Kithkin, a deck I didn't expect to show up in large numbers. This deck also fits my style of play very well. The deck can change roles very easily. Sometimes you have to be aggressive, but the deck plays the control game very well. Most of my matches were won after I had traded creatures with my opponent and gained incremental advantage with Ranger of Eos and Bloodbraid Elf. Once the games went long I started making my Figures into 8/8s and attacking. This deck doesn't look overly Johnny on the surface, but I felt like this deck embodied my style of play and approach to the game.

I went 7-1 in Standard, losing only to Kithkin, and was very happy with the deck. I got back home to New Jersey and logged onto magicthegathering.com and read the coverage of other National Championships.

I was at a loss when I tried to figure out how I could beat Elves with the Time Sieve deck. Then I saw Olivier Ruel's list from the Top 8 in France and got extremely excited. Here's what Hall of Famer Olivier Sleeved up:


I was surprised to see this list do as well as it did. It has 61 cards, which seems like a disaster given its dependence on turn two Howling Mine. The features of the deck that caught my eye were the inclusion of Silence and Ethersworn Canonist in the main. I tested with the Silence and was pretty underwhelmed. I think Negate is strictly better in a deck like this, despite its higher mana cost. Canonist in the main gives the deck a reasonable plan against Elves. I had discussed the power of Canonist in my column the week before. I even had four in my sideboard at Nationals. Somehow I had forgotten that Canonist was an artifact, I never even considered in it as an option in a deck with no creatures. I didn't want to give my opponent live removal spells. (Normally you get an inherit advantage with a creatureless deck because your opponent has cards that kill creatures; these cards become 'blanks' or 'dead draws' and you have established Game 1 card advantage before the match even started.)

Oli solved our Elves problem, but Faeries is still a tough code to crack. With the number of Great Sable Stags wandering through the trees I think it might be in our best interest to cross our fingers and try to avoid the matchup.


Now that's a Johnny deck! The deck has a good number of rares, but Tezzeret is the only one that's going to be hard on your budget. (Savvy shoppers can still find Tezzeret for under five tickets.)

Chris was kind enough to play some games with me again. 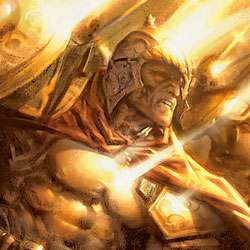 I lose the roll and mulligan. I keep Island, Plains, Mistvein Borderpost, Howling Mine, Kaleidostone, and Open the Vaults. Chris keeps his opener and plays a Windbrisk Heights on turn one. I draw another Island, cast my Mistvein Borderpost, and pass the turn. Chris casts Knight of Meadowgrain and passes. I draw another Howling Mine, play my land, and cast the first Howling Mine. Chris draws two cards and attacks for 2, then follows his attack with Spectral Procession. I draw Pollen Lullaby and Tezzeret, play a land, and cast another Howling Mine before passing the turn. Chris casts Honor of the Pure and attacks for 9, leaving the life totals at 9 to 25 in his favor. He uses Windbrisk Heights to cast a Cloudgoat Ranger on the cheap. I draw two lands and a Time Sieve. I play a land, cast my Kaleidostone, draw Angelsong, and pass the turn. Chris attacks with his team, and I cast Angelsong. He cast another Honor of the Pure and passes. I draw Time Warp and two Borderposts. I play my land for the turn and cast Time Warp. On my extra turn, I draw Time Sieve, Kaleidostone, and another land. I play my land and cast both Time Sieves and the Kaleidostone, activate Time Sieve, and take an extra turn. I draw a Time Warp and a land (I sacrificed one Howling Mine) and cast Open the Vaults, I draw another Time Warp and Elsewhere Flask, play my land, cast another Borderpost, and sacrifice five artifacts to the Time Sieve again. I show Chris the double Time Warp and Tezzeret, and he concedes. 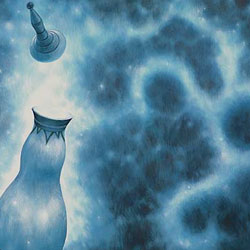 I win the roll and keep Island, Swamp, Plains, Wildfield Borderpost, Wildfield Borderpost, Time Sieve, and Open the Vaults. I cast a Borderpost and pass the turn, and Chris plays a Secluded Glen and passes back. I draw an Elsewhere Flask and cast my Time Sieve. Chris plays a Bitterblossom and passes. I draw another Elsewhere Flask, cast Elsewhere Flask drawing Kaleidostone, cast another Borderpost, and pass the turn. Chris plays a third land and passes. I draw Negate, play my land, and cast another Elsewhere Flask and Kaleidostone, drawing a land and a Time Warp. Chris casts Scion of Oona on my end step, then attacks for 3 and passes. I draw another Kaleidostone and cast it, drawing a Howling Mine that I attempt to cast. Chris cast Cryptic Command countering the Howling Mine and drawing a card. I cast Negate. I sacrifice my Time Sieve and four two-mana cantrip artifacts to take an extra turn. I draw Tezzeret and Open the Vaults, cast Open the Vaults, and draw four cards. I now have plenty of room to go off.

Chris isn't sure if his Cryptic Command was the right play. We discuss it a bit further and decide that my hand was probably too strong to lose on the play. The Negate backup would be there forever and I would almost certainly attempt to go off if he held back the mana and tried to make a second Scion of Oona on my endstep. I still think this is a very bad matchup. You should be able to win your share of matches if you play your best and remember to be patient and aggressive about comboing when you need to. 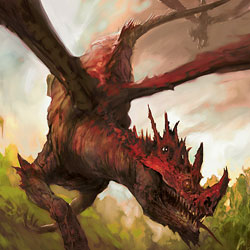 I lose the roll and mulligan to five. I keep Island, Mistvein Borderpost, Howling Mine, Time Warp, and Tezzeret the Seeker. Chris keeps his opener and plays a Vivid land and passes. I draw another island, play my Borderpost and pass. Chris plays another Vivid land and passes. I draw an Elsewhere Flask, play a land, and cast Howling Mine. The game is basically draw-go for awhile here. Due to the nature of the Five-Color Control deck, it can't really play a threat. I cast random Elsewhere Flasks and Kaleidostones through the game and successfully hit my land drops. When Chris gets to fourteen lands he decides to play a threat in Broodmate Dragon. I want to see if I can induce a counter war on his turn so I attempt Cryptic Command countering the Dragon and bouncing one of his lands (each of those fourteen may be very important). Chris thinks for a bit and decides to let the Dragon get countered. He discards some irrelevant spells and passes the turn.

After I draw my three cards for the turn (I had played an extra Howling Mine), my hand consists of Time Warp, Time Warp, Open the Vaults, Island, Time Sieve, Time Sieve, Tezzeret, Negate, Negate, and Pollen Lullaby. I have fifteen total lands and Borderposts on the battlefield. Chris has eight mana sources untapped. I have six cantrip artifacts on the battlefield. It's pretty easy at this point to go off. I cast Time Sieve, and Chris attempts a Cryptic Command. I let it go. I cast the second Time Sieve, and Chris has a second Cryptic Command. This time I Negate. I sacrifice five cantrip artifacts and put an extra turn on the queue. I cast Tezzeret the Seeker and untap two Borderposts, then cast Open the Vaults. I get to attack for over fifty the next turn with an army of artifacts.

Well. That went quite well for us Johnnies! The Time Sieve deck seems like one of the up-and-coming Standard decks to watch. It's definitely a Johnny deck in every regard. It's very original, It plays the game differently than other decks do, and, perhaps most importantly, it was created by a unknown Johnny deep in the depths of a Magic forum. Whoever you are, you should be very proud of yourself. This is why us Johnnies play the game.