've been on vacation with my girlfriend since last Thursday. Don't tell anyone, but I have the fever. Ever since last week I can't get off this Pauper craze I've been on.

I've learned a lot since last week. A lot of my early understandings of the format were not even close to being correct. Last week I made a deck I thought to be pretty original. A few days after the column went to print, though, I started to realize a few things.

First of all, the deck I made is a medley between two known archetypes called "Grand Entrance" and "Cogs" that were developed by the PDCMagic community. My deck was pretty different from most Grand Entrance or Cogs lists, but most of the modifications were probably mistakes.

Leonin Squire was definitely a good modification, I was always happy to draw this and I don't think there's a better replacement.

The inclusion of main-deck Ancient Grudge seemed great to me last week, but I've come to realize that I was only experiencing such an Affinity-heavy field because of the time at which I was playing and the small sample size I had to work with. As I've played more I've come to understand that Affinity and other artifact based decks probably only comprise about 15-25% of the field. I'm still happy to be playing with Ancient Grudge, but I think it belongs in the sideboard.

The lack of Aven Riftwatcher between the main deck and sideboard is certainly a mistake. I hadn't played much Pauper and I thought the format consisted of much more Affinity and much less Red Burn than it actually does.

My list was also missing Echoing Truth. I feel that most decks need either Echoing Truth or Echoing Decay to survive a Stormy day. I've been more and more inclined to believe that Storm is far and away the best deck in the format. Cards like Hurly-Burly and Rain of Embers aren't good enough to beat a huge Empty the Warrens because most people have a Goblin War Strike or something else equally as absurd and awesome to kill you on the turn they go off. It's important to note that even Echoing Truth and Echoing Decay aren't auto-wins; a lot of Storm lists have Skirk Prospector and can simply sacrifice the targeted token in response to your mass removal.

So, I've been thinking about Pauper for the past week, and I haven't even had Magic Online available to me. I'm going to take you step by step through my deck-building process and hopefully make some exciting new decks. 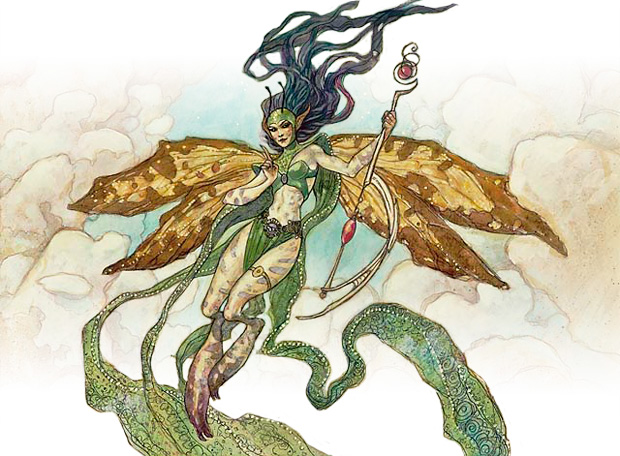 First off, we need inspiration. My favorite card to be printed in the past two years is probably Spellstutter Sprite. I played a deck built around ninjutsu and Spellstutter Sprite at Grand Prix Vancouver last year. It was probably the most fun I've ever had with a deck in my life. The deck featured powerful cards like Mothdust Changeling and Cloud Sprite. I was playing some casual games with that deck last week and I couldn't help but notice that almost all the cards were commons. I don't think it's a stretch to turn this into a powerful Pauper deck, so we'll use this as our starting point.

Now we need to identify which cards are absolutely necessary.

Spellstutter Sprite: It's important that you understand how good this can be. You play it on your opponent's second turn countering a spell. On your own turn you bounce it back to your hand with Ninja of the Deep Hours. Then you play a removal spell on your next turn, attack (drawing an extra card), and pass with counter mana open again. It really is brutal.

Ninja of the Deep Hours: This is one of the best cards in the format, and it happens to be especially powerful in a deck like this. If we play enough bounce / removal to back it up, the card advantage can really start to get out of hand.

It's only eight cards, but this is a good start to a powerful deck. Now we have to choose our second color. Black gives us a strong removal suite and the powerful Okiba-Gang Shinobi. No other color seems to come close in rounding out this deck properly so I think we're definitely going to end up being blue-black.

Now our deck needs one-drops. I want to play a good number of evasive one-cost creatures that I can use to drop a turn-two Ninja of the Deep Hours. I'd also like my one-drops to power up my Spellstutter Sprites so I can use them to counter two drops on my second turn. Cloud Sprite and Nightshade Stinger seem like obvious inclusions and we might want to round out the list with a Mothdust Changeling or two.

I also want to be playing another creature that abuses the ninjutsu mechanic. A few Ravenous Rats can be used to ruin an opponent's day. (Return them back to our hand to force a discard again, and again, and again.)

With the amount of flyers we're playing I think it's safe to say that Okiba-Gang Shinobi will probably be good enough to make the cut. It has a lot of synergy in our deck with the Rats and Sprites.

Now all our deck needs is a healthy removal suite. Echoing Decay and Rend Flesh are two of my favorites. I also like the idea of playing a Horobi's Whisper or two that I can splice onto my Rend Flesh.

I know the deck has more black mana than blue, but the first few turns are extremely blue dependent so I think it's important to play at least twelve Islands. I won't get a chance to play with it until I get home, but I'm pretty sure this deck is going to powerful and a lot of fun.

Another Pauper deck I've been thinking about putting together is a Block Constructed deck that has a soft spot in my heart. I hadn't played Magic for the entirety of Mirrodin and Kamigawa blocks. I was bored one weekend and found myself reading some coverage on this web site. I got the fever pretty awful and found myself sifting through boxes of commons and uncommons at my local shop trying to put together a deck for a Sunday night Standard tournament. I ended up building a deck that was almost entirely based on the Champions mechanic splice. I ended up winning the local tournament with a deck that was pretty awful in retrospect.

The idea behind this deck is to hide behind your removal spells and keep your opponent's creatures tapped or in hand with Psychic Puppetry and Consuming Vortex. You're essentially just dragging the game out as long as you possibly can. Every once and awhile you may find the extra mana to splice an extra Glacial Ray at your opponent's face. Eventually you'll find an Ire of Kaminari and deal your opponent a lethal dose of damage.

The most important things here are the Arcane spells that draw cards. Sift Through Sands, Peer Through Depths, and Reach Through Mists are all absolutely essential to this decklist. You can simply cycle these cards into more copies while splicing removal spells and your opponent will start having a lot of trouble getting anything to stick.

The board control element of the deck makes it especially powerful against midrange aggro decks. The deck plays a full set of Glacial Ray, Psychic Puppetry, and Consuming Vortex. These cards work off the Arcane card drawers or one another to provide you with excellent card advantage / quality. The deck also sports a plays et of Lightning Bolt to help it survive the early game. The singleton Horobi's Whisper is there deal with quick starts from decks like Affinity.

The Vital Surge is absolutely necessary for beating the Red Burn decks that seem to be the most popular nowadays. Once you start splicing a Vital Surge the game gets pretty hard for them to win.

Deep Analysis is very important, too. Decks like Parlor Tricks will probably get ahead with their Ravenous Rats and we won't have much to say about it. Deep Analysis gives us an extremely powerful answer to cards like Ravenous Rats.

After playing with the numbers for a bit I made this deck list:

Cards like Mana Leak may seem like awkward choices for the sideboard, but this deck has a lot of cards that can end up entirely dead in particular matchups. Cards like Mana Leak are broad enough that they can be sided in for any card that's deemed "dead" and always be of some value.

I hope you all enjoyed this quick Pauper deckbuilding session. Next week I'll begin to examine Standard again. As always, thanks for reading and get out there and brew up a spicy one.