ello and welcome to the first week of Dark Ascension previews! It's common knowledge that there's nothing I love more than a blue-red deck, and I'm lucky enough to preview one of the best cards for blue-red since Deceiver Exarch. Today's preview card turns Innistrad block's favorite mechanic into a backbreaking card-advantage source.

Burning Vengeance decks have shown up occasionally in Standard events since the beginning of Innistrad's release. These decks use Burning Vengeance to accrue additional card advantage from their flashback spells by burning creatures or simply applying some pain to the opponent's face.

One of the major issues with the Burning Vengeance deck was its ability to draw Burning Vengeance in time to make all the over-costed flashbackyness worth the wait. Cards like Dream Twist haven't been playable outside of Block Constructed because they're unreliable and often result in card and tempo disadvantage.

Today's preview card is exactly that! 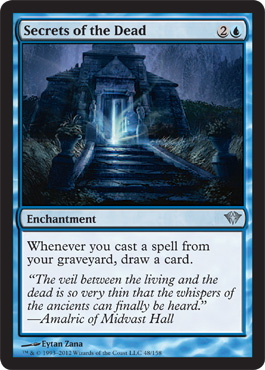 Secrets of the Dead encourages deck builders to fill their decks with flashback spells. There's an interesting balance to a card like this, though. Many of the best flashback cards from Innistrad already provide card advantage. There's nothing worse when you're behind on the board than drawing a few cards only to find spells that draw more cards.

To prevent this from happening, you're going to need some mana-efficient spells that don't have flashback. For example, a card like Mana Leak fits beautifully into a deck with Secrets of the Dead and Burning Vengeance. You can happily pass the turn with Mana Leak mana open and counter your opponent's key spell. Sometimes, your opponent will play around the Mana Leak; this gives you an opportunity to cast some end-of-turn card advantage tool like Desperate Ravings or Think Twice. 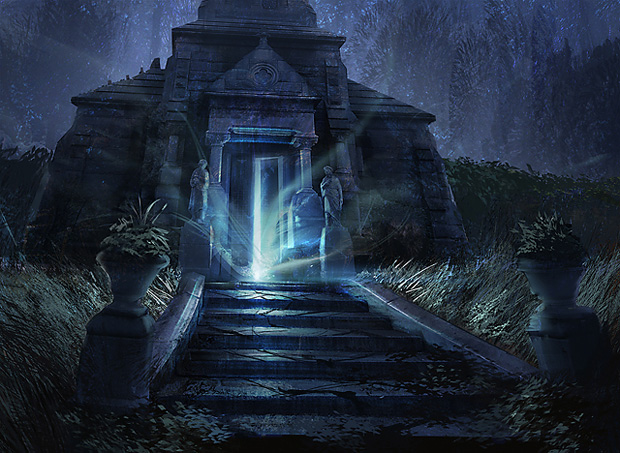 Secrets of the Dead | Art by Eytan Zana

It's important to note that Secrets of the Dead, like Burning Vengeance, is an uncommon. If you're a newer player who drafts somewhat regularly it shouldn't be difficult to find four copies of each of these cards. Most of the good flashback spells are also commons or uncommons, making a flashback deck an ideal candidate for a deck that plays no rares at all.

Today, I'm going to attempt to build a flashback deck that doesn't play a single rare!

Secrets of the Dead and Burning Vengeance will be the engines the deck uses to get maximum value out of its flashback spells. I'm not going to play four copies of each as I fear it would result in too many hands where I'm forced to mulligan because I have too many enchantments and not enough flashback spells to give them the value they deserve. It's important to value these cards properly in your opening hand. 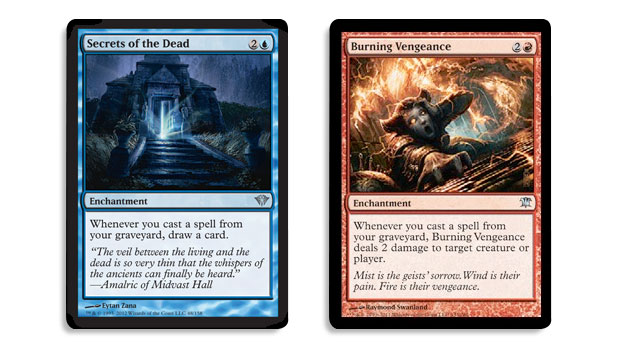 Geistflame has proven itself to be very good, even in decks that don't play cards like Burning Vengeance or Secrets of the Dead. Just about every deck in the format has targets for Geistflame—even the hardcore control decks play Snapcaster Mage. Against many decks, this is an important answer to Inkmoth Nexus. Geistflame can buy you a full turn against decks like Green-White Tokens that intend on playing a one-mana accelerator like Avacyn's Pilgrim or Birds of Paradise on the first turn but completely ignore two-mana spells during deck construction. It's safe to say this is one of the best flashback spells in Standard. I'd be a fool to not play a full four copies.

Mana Leak might not have flashback but it's a terribly efficient spell that fits very well into a deck that plays so many instants. It's necessary to have countermagic when fighting against decks with big threats that can't easily be dealt with via Geistflame and Burning Vengeance triggers. The card fits so well into the deck's strategy that I'm going to play four copies of it.

Dissipate might not work as hard for the cost as Mana Leak, but there are times when your opponent has the mana to resolve a Primeval Titan even through a Mana Leak. These are the times when you're going to be very happy you have Dissipate in your deck.

If you thought Think Twice was good, then wait 'til you meet Desperate Ravings. This card is everything you get from Think Twice, but so much more. Discarding a card at random might seem like it can mess with your plans, but you're not casting Desperate Ravings when you already have the card you need in your hand. If you have one or more cards in your hand, Desperate Ravings is more likely to find a given card successfully than Think Twice. Discarding the card at random can actually be an advantage a lot of the time. If you're lucky enough to discard a card with flashback, you're much further along the mana chain required to start getting full value out of your Secrets of the Dead and Burning Vengeance.

Forbidden Alchemy is a stellar card in this type of deck. An Impulse effect makes it very easy to find a Burning Vengeance or Secrets of the Dead to get your engine going. Additionally, when finding a lynchpin enchantment or a land, Forbidden Alchemy can also dump some flashback cards in the graveyard to make the game significantly harder for your opponent. Unfortunately, the flashback cost for Forbidden Alchemy is black. I'm going to play a few copies of Shimmering Grotto to satisfy this condition, but it's worth noting that Forbidden Alchemy might have been good enough for the deck even if it didn't have flashback.

Incinerate is the most efficient spot-removal spell in our colors. Geistflame is great, but sometimes we're going to need to kill something with 2 or 3 toughness. Remember, we have to play with some cards that don't fit the theme if we're going to survive to the point where our engine gets going. One of the best parts about a card like Incinerate in a deck like this is the ability to dome your opponent. Secrets of the Dead gives you a steady stream of cards that can be used to kill an opponent very quickly if you have a Burning Vengeance on the battlefield. Opponents will often sculpt their game plan to win before you have the opportunity to burn them out with the Burning Vengeance, so one or two well-timed Incinerates can drastically change the math your opponent is relying on so heavily.

Silent Departure seems necessary to me, especially given just how unknown the new set is. There are going to be times when your opponent is able to resolve a creature with more than 3 toughness. In these situations, it becomes incredibly important for you to have some type of reasonable game plan. Remember, I don't want to play any rares, so I can't use card like Phantasmal Image to deal with resolved fatties.

Rolling Temblor should make it very difficult to lose to decks like Illusions or Tokens. The deck already makes swarm-based aggro decks shudder with its full play sets of Geistflame and Incinerate, but cards like Elspeth Tirel and Geist-Honored Monk make it difficult to clear the board even with a handful of burn. It's important to have a sweeper for these types of situations. I'd probably recommend swapping these for Slagstorm if you're lucky enough to own some. As it stands, Rolling Temblor fills the role it's needed for very well.

Here's the final decklist once we crunch all the numbers.

Secrets of the Dead

3 Burning Vengeance 4 Secrets of the Dead

This deck should perform very well against a lot of Standard's most powerful decks. Unfortunately, Thrun, the Last Troll is virtually impossible for this deck to beat. You're going to need some Phantasmal Images in your sideboard if you want a chance of beating the hexproof legend.

Thrun seems like the only major problem for this deck, though. That's a pretty good spot to be in with a Standard deck that doesn't include any rare cards. If you're looking to get started in Standard with the latest set, then this is a very competitive route that won't be difficult to acquire at all.

Make sure to tune in next week for another exciting Dark Ascension preview! Until then, check out the other columns here on DailyMTG.com for more exciting previews from the new set.