Due to troubles with snow-covered planes en route home from the StarCityGames Open in Kansas City, Jacob Van Lunen wasn't able to get an article in for us this week. Below, for those who may have missed it, is last week's article, Jake's latest meditation on perennial Building on a Budget favorite Rage Forger.

Enjoy—and good luck to Jake and everybody else with snow problems this week!

elcome to 2011's first installation of Building on a Budget. It's no secret that Rage Forger is one of my favorite cards to have been printed in the last few years. Rage Forger is a card that hits for a lot of damage out of nowhere. It provides extraordinarily aggressive starts that are nigh impossible to outrace. 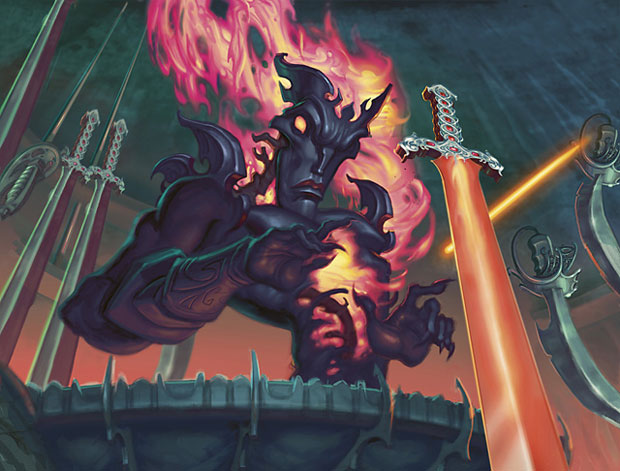 Rage Forger has been all but forgotten since the summer of 2008. I've been stewing over it, though. Talking about Rage Forger to anyone that might lend a spare ear.

Rage Forger recently lost its position as "the best" Shaman. That title is now firmly in the possession of Fauna Shaman. Survival of the Fittest on a stick has been a bit out of budget for this column until recently. It's worth noting that Fauna Shaman combos quite nicely with Rage Forger. Ultimately, the goal of this deck is to find as many Rage Forgers as possible.

Bosk Banneret lets you drop your hand onto the table. This is precisely what you want to be doing with a deck like this. Bosk Banneret can fight with some of the best cards in Extended. Faerie decks have a lot of trouble trading with a 1/3, especially once it gets some Rage Forger counters.

Sensation Gorger is an interesting card. There was a lot of buzz around this card when it first got printed. People envisioned themselves refilling a hand of burn spells while their control opponent was forced to grab a random combination of lands and spells. That isn't how it worked out, though. Sensation Gorger requires players to pack a lot of creatures into their decks. It's impossible to play enough creatures to make the Sensation Gorger worthwhile and still have a burn plan. What about situations where creatures are burn spells, though? A Rage Forger deck makes this card look a lot more appealing.

Goblin Ruinblaster happens to be a Shaman. I'm a huge fan of this card in the current Extended metagame. If you're lucky enough to be on the play, then this card can be truly backbreaking against control decks. It's pretty good on the draw too, especially if you have a Bosk Banneret to hasten the arrival of your Avalanche Riders.

Bloodbraid Elf is the most powerful card in the format. I've played four copies of this card in every Extended deck I've tested for the last two weeks. Playing less of this card is flat-out wrong.

Wolf-Skull Shaman is a nice threat that often multiplies via kinship. Getting a few wolves is surprisingly relevant. I'd be lying if I didn't say it was filler, but this is some pretty swanky filler to get stuck with.

Cunning Sparkmage has a lot of value as long as Faeries is the deck to beat. I'll be sure to include additional copies of this card in the sideboard as a way to help combat Faeries. I'd also like a few copies of Basilisk Collar to make the Sparkmages more relevant against Mythic and other decks that have Baneslayer Angel.

Hitting kinship on Leaf-Crowned Elder is like opening a present. Sometimes, when you've searched something up with Flamekin Harbinger, it's like getting exactly what you asked for.

The sideboard for a deck like this is fairly straightforward. Pingers are Shamans and they happen to be very strong against Faerie decks. Basilisk Collar makes a deck like Mythic a lot more of a winnable match-up. Guttural Response replaces Bloodbraid Elf against Wargate and Vivid Control. Kitchen Finks helps fight Jund and Red decks. None of these sideboard tools interfere with the decks aggression.

I played a pair of matches on Magic Online to get a feel for the deck. 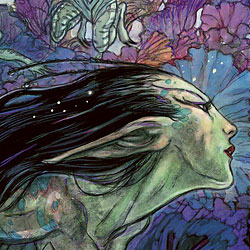 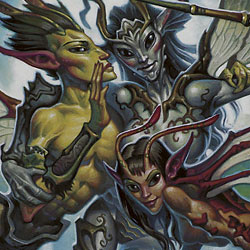 My opponent cast a Vendilion Clique during my draw step and made me discard the Fauna Shaman. I guess dealing with a pair of Sparkmages was no problem. (Sarcasm.) I cast one of the Sparkmages, shot the Vendilion Clique, attacked for 2, and passed the turn. My opponent played a fourth land and passed the turn. I revealed a Goblin Ruinblaster, made another 2/2, played my land, cast Bloodbraid Elf, cascaded into Vithian Stinger, my opponent cast a Cryptic Command countering the Bloodbraid Elf and tapping my team. I shot face for 1. My opponent untapped, cast a Bitterblossom, and passed the turn. I revealed a mountain, drew it, played it, attacked for 6 with Wolf-Skull Shaman and the tokens. My opponent used a Disfigure on the Shaman and took 4.

I cast a Goblin Ruinblaster with kicker, destroying a Creeping Tar Pit. My opponent untapped, took a point, and made a token, and passed the turn. I shot the token and his face on his end step. I drew a Forest, played it, and cast Cunning Sparkmage. My opponent went for a Mana Leak, but I had the mana to pay for it. I attacked with my Wolves and passed the turn. My opponent made a Faerie and drew for the turn before conceding.

Recap: The Faerie match-up is obviously quite good for a deck like this. If you're worried about fighting a lot of Faerie decks and you happen to have an extra copy of Great Sable Stag, then I would strongly suggest adding it to the sideboard in place of the Vithian Stinger. 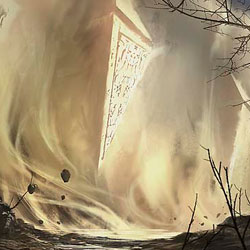 Sideboarding:
-4 Bloodbraid Elf, -1 Cunning Sparkmage, +4 Guttural Response, +1 Kitchen Finks
It may seem crazy to take the Bloodbraids out, but the bodies are somewhat irrelevant against Wall of Omens, and flipping into the Guttural Responses is usually subpar. I like this sideboarding configuration. 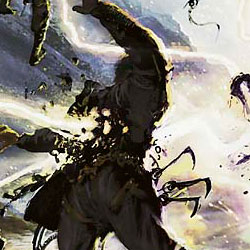 I revealed Goblin Ruinblaster, cast it for free, paid the kicker, destroyed my opponent's Valakut, the Molten Pinnacle, cast Rage Forger, and attacked for 9. My opponent drew and passed the turn. I revealed a Flamekin Harbinger off of the Leaf-crowned Elder and searched for a Rage Forger. I drew the Rage Forger and cast it. My opponent showed me an awkward hand with a lot of Cryptic Commands to go with his one blue mana source.

Recap: The Wargate match-up is winnable, but these games do involve a great deal of luck on my part. The win in the second game was very luck dependent. I think this deck is capable of outracing Wargate on the play, but winning games on the draw is very difficult despite what the test games might tell us.

I would add Raging Ravines, Fire-Lit Thickets, and Mutavaults if I were looking to improve the list. This deck is a lot of fun. It's very aggressive and easy to obtain the cards. Being the aggro is never a bad idea in a new format. This deck may be the correct choice for a metagame that's set up to handle Wargate, Vivid Control, and White-Blue Nolark. People keep slowing down and skimping on ways to deal with hyper-aggressive strategies. Beating mono-red is easy enough with bullet cards like Kor Firewalker and Burrenton Forge-Tender. This deck displays the same levels of aggression that mono-red decks do while not being as vulnerable to the sideboard hate.