ello, and welcome to another edition of Building on a Budget. You may recall my column Shamans Trounce last fall. Shamans have had a soft spot in my heart ever since the printing of Rage Forger. I've been experimenting a lot recently with some of the new Shamans that have been printed since that column. This week I'd like to share my newest build of the deck.

The new set offered up a great new addition to the Shaman deck. Colossal Might is a new and powerful tool for aggressive decks. There haven't been many red-green decks doing well, but I imagine Colossal Might could be strong enough to push these decks into the competitive realm. 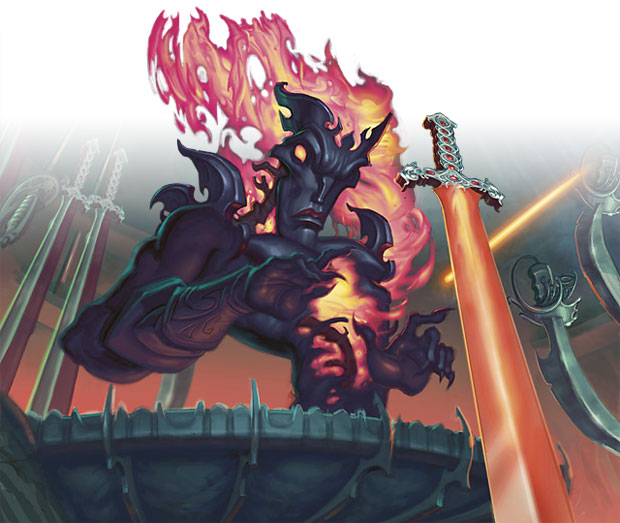 The deck curves very well and wins by attacking for 20 damage. Rage Forger is key in a deck like this. The amount of damage caused by an attack that follows a Rage Forger is quite impressive. Flamekin Harbinger always searches for Rage Forger.

If your opponent plays a Knight of Meadowgrain or Knight of the White Orchid it's important to set up a double Rage Forger play. Play out all your creatures and set up a board that makes it difficult for your opponent to attack into you. Once you have a healthy army it's time to spring your trap. Playing a pair of Rage Forgers gives each of your attacking creatures +2/+2 and each of the Rage Forger abilities trigger before blocks. Five attacking creatures deal 10 damage before blocks have been declared. The double Rage Forger play ends the game most of the time. When it doesn't finish it off immediately, a well-timed Flame Javelin will finish it off more often than not.

I'll start by explaining the card choices. I've received a good number of emails asking me about optimal play with my decks. This week I'd like to explain my card choices and explain how to properly play each of the cards. Hopefully, this will give you more insight into the intricacies of the deck.

Elvish Visionary: Getting a cantrip out of a Shaman is incredible. You should play your Visionaries before your Sensation Gorgers and Rage Forgers, but after your other creatures. You want to play your creatures with higher power first to maximize the amount of damage you break through with in the early game. If you're playing against a control deck with Pyroclasm, Volcanic Fallout, or Jund Charm, then playing Elvish Visionary a little earlier is probably your best bet. I'd play a Wolf-Skull Shaman and then play my Visionaries and try to bait the Pyroclasm effect. I like to hold Rage Forgers in my hand to punish my opponent if he or she taps out for card draw or a threat of their own instead of playing their Pyroclasm effect early.

Bosk Banneret: The Banneret is a very important card in this deck. Playing a pair of Rage Forgers is very easy to do when they only cost two mana apiece. Bosk Banneret can give you some explosive draws that end the game quickly and decisively. The 3 toughness is actually quite nice, as it allows you to play these without fear of Pyroclasm effects.

Wolf-Skull Shaman: Wolf-Skull Shaman is very good against other midrange aggro decks, but an endless stream of 2/2s is good against anyone. Wolf-Skull Shaman is interesting because it doesn't have much effect on the board right away, but cards like this demand removal spells from your opponent if the game is going longer than expected. There are rare situations when you don't want to reveal the Rage Forger you hit with kinship. If the board is already clogged it may actually benefit you to keep the Rage Forger to yourself until you know you can crash in for a lethal hit.

Flamekin Harbinger: Always get Rage Forger with your Harbinger. Don't chump with this or any of your other creatures unless you absolutely must. Even the random 1/1s turn into a lot of damage when you rip a Rage Forger off the top.

Rage Forger: The most important piece of the deck. I've already explained the value of slow-rolling Rage Forgers, but it's important to remember that if you're curving out properly, then playing your Rage Forgers quickly is key to stealing wins in the early turns of the game.

Leaf-Crowned Elder: Free spells are great. Getting to cast them for free is even better. The card advantage provided by Leaf-Crowned Elder is really powerful. If your opponent doesn't have a removal spell at the ready, the card advantage this provides can get out of hand quickly. It's really impressive when you flip up a Flamekin Harbinger or Rage Forger. The former of the two searches for a Rage Forger which you draw that very turn. You can go from having no hand and being behind in board position to having your opponent in chump-block mode in one draw step.

Incinerate and Flame Javelin: I wanted to play removal that could go directly to the face. This deck can sneak enough damage in early that doming an opponent is a pretty common way to win games.

Colossal Might: Alara Reborn gave us this new gem. Don't put yourself in a situation where you're trading the Colossal Might for your opponent's turn-two play and a little bit of damage. (Unless it's something like Knight of Meadowgrain.) You want to play your threats before your burn in a deck like this. Think of this pump spell like a burn spell. If your opponent taps out in the midgame don't be afraid to use it for a free four damage. Likewise, if your opponent has one white mana open and five cards in hand, then it probably isn't wise to play this card, as you're likely going to get two for oned by Path to Exile. (Path doesn't really two for one, but you get what I'm saying.)

I took the deck into the casual room to play some games. 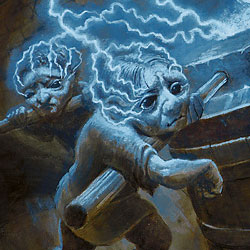 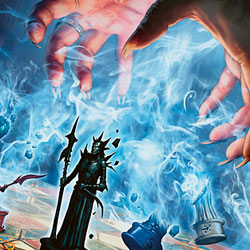 keep Mountain, Mountain, Forest, Flamekin Harbinger, Elvish Visionary, Incinerate, and Incinerate. My opponent plays a Shelldock Isle and passes. I draw Vithian Renegade, play my Harbinger, find a Rage Forger, and pass. My opponent plays another Shelldock Isle and passes. I draw Colossal Might, Play my Elvish Visionary, drawing a Guttural Response, attack for 1, and pass. My opponent plays a Howling Mine and a land and passes. I draw another Guttural Response and Incinerate, attack for 2, and play Vithian Renegades, destroying Howling Mine. He untaps, plays his fourth land, and passes. On my turn I draw a Mountain. I play my land and attempt my Rage Forger. He plays Broken Ambitions for two, but I play my Guttural Response, then I attack for 11. The next turn he plays a main-phase Evacuation. I draw a Mountain and pass. (I intend to burn him out.) He plays a Sanity Grinding and Twincasts it. I'm low on cards, but I cast a pair of Incinerates on his end step he attempts to counter the second, but I have a Guttural Response waiting. 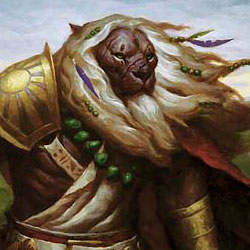 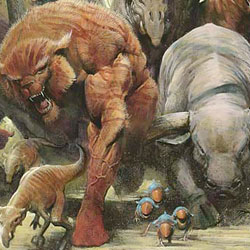 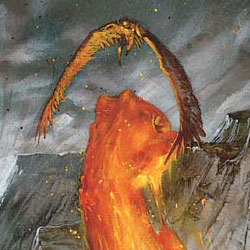 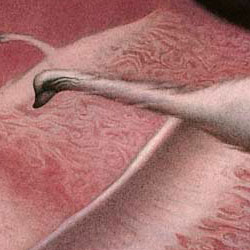 I really like this deck. I think there definitely needs to be some more Swans hate in the sideboard now that the deck did so well at Grand Prix–Barcelona.

If you're willing to put some extra money into the deck you should find a playset of Karplusan Forests and Fire-Lit Thickets to replace the Terramorphic Expanses and Firewild Borderposts.