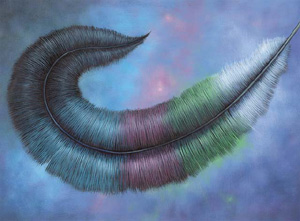 hat color do you play?"

Occasionally when I tell someone I play Magic they try to show off their chops by asking me this question. I used to give some pedantic answer like, "I pretty much play a different deck at every tournament, so I kind of play whatever is best in a given format." I'd be given a puzzled look the majority of the time I gave this answer. As I've become more passive and less pugnacious I've acquired a new answer to the color question:

The answer is perfect on many levels. You don't seem like a gaming elitist, and you get to chuckle a little bit on the inside. But in all honesty, I don't just play blue. In fact, I'd say that at four out of five Constructed Magic tournaments I go to, I'm playing at least four colors.

I think Magic is a lot more fun if we think about it on a broader scale. Blue is the most attractive color. It obviously has something to do with its cards' power levels, but it also has to do with the color's flavor. Think about the adjectives one might use to describe a blue mage: persuasive, cunning, playful, intelligent. These are all very attractive qualities. The more we know about Magic and the color pie, the more we see ourselves as blue mages. Not because we're necessarily blue mages, but because we'd like ourselves to be.

I really like thinking of personality traits as colors in Magic. It's fun to think of people you meet in terms of the Magic color system, white being law, blue being cunning, black being ambition, red being passion, and green being wisdom. But, the truth is, we've all got a bit of every color in us. When someone drops a dollar, we don't pick it up and put it in our pocket, we pick it up and give it back to them. That's our ethical code; it's our white. When we're late to work, we don't say, "Sorry, I was feeling exceptionally lazy today and decided to sleep in an extra hour." We come up with an excuse. That's our blue. When we're playing for Top 8 in a PTQ and our opponent mulligans to six and draws seven cards by accident, we don't tell them to put one back, we make them go to five. That's our black. We know that feeling when our blood is boiling, when we're so angry we feel like we're going to explode. That's our red. And every time we learn from a mistake or tell a good story, well, that's our green.

Playing to the Base 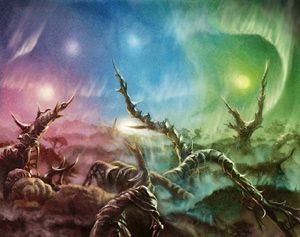 As well-rounded Magic players, we understand that we can't be defined by a single color. We're people, and people are way too complex to be confined to a single color.

Good mana bases allow us to express ourselves.

Magic is a game designed for creative minds. When I'm brewing up a new deck I oftentimes ignore the colors of the cards until I have a cohesive curve and sufficient synergy between my spells. Fortunately, Wizards has been giving us beautiful lands that produce millions of colors with negligible drawbacks. It's not a problem if I want to include Spectral Procession in a deck with Furystoke Giant and Bitterblossom and still expect to play said Spectral Procession on turn three or four. Last year in Valencia the best performing deck at the Pro Tour, Cephalid Breakfast / Life, was actually six colors. (I played against one of its pilots and I swear he tapped a Gemstone Mine for purple at least three times in the match.) Wizards acknowledges that people don't want to be constrained to one, two, or even three colors when deck designing. We're colorful people, us Magic players.

Expressing yourself can be expensive, though. Whether it's new Air Jordans or a new breastplate, you might have to shell out some cash if that's how you want to express yourself as an individual.

Mana bases are, more often than not, the least budget-friendly part of a competitive deck. It's not unusual to see a tournament deck list feature exclusively rare land. You can break the format and use cards that no one ever bothered to look at twice, but you're still going to need a playset of filter lands (like Twilight Mire) or some Reflecting Pools to support your Vivid lands. Speaking of which, I was really happy with the creation of Vivid lands; Magic needs good mana that isn't rare. But anyone who has had the pleasure of racking their brain trying to decide whether or not it is worth it to tap their Vivid Creek and remove the second counter can tell you that Vivid lands don't quite tap for all five colors all the time, though it's close.

A new gift is on the way for budget deck artists everywhere. Shards of Alara has a bunch of new land, and none of it is rare. That's right, I can assure you that there are absolutely zero rare lands in the new set. Individuality is coming to the masses.

I would like to present all of you with Arcane Sanctum: 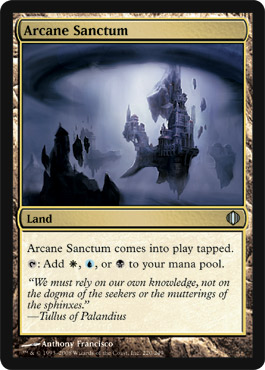 Do you remember the first time you saw Coastal Tower? I do. It was midnight and I stayed up with my brother to see the Invasion Spoiler the night it went up on this very website. I remember thinking to myself, "This is so good! I don't do anything on my first turn anyway. I can now reliably cast my Counterspell on turn two and follow up with a Lin Sivvi, Defiant Hero on turn three! I don't even have to take any pain!" It seems funny now that we've all been spoiled with Hallowed Fountain, but Coastal Tower and Salt Marsh were very good. Wizards had finally given players reasonable dual lands five through eight. We had spent years with the Ice Age painlands and nothing to support them. The Invasion come into play tapped lands solved so many of the mana-screw problems that today's crowd doesn't even understand. Today getting mana-screwed means you only drew one or two lands, but there was a time when you could have five lands in play and still not be able to play half the cards in your hand. Wizards helped us jump through these hoops by giving us better mana-fixing. With more mana-fixing the variance of Constructed Magic was dampened a bit, which, in my opinion, is very good for the game.

I used to play a pair of Dromar's Cavern in a deck I played back in high school and accepted the huge drawback because I needed to smooth out my mana base. Remember Dromar's Cavern? Dromar's Cavern was, in retrospect, a bad card. It existed in a time when Coastal Tower was the best Block mana-fixing available to format-breaking hopefuls. While the Planeshift lairs may have been clunky, they were necessary. People did very well at competitive levels with these lands in their decks. Coastal Tower and Dromar's Cavern were good cards back when Fact or Fiction was legal. No, really, I swear. Check it out.

That's right, Mike Turian, member of the 2008 Hall of Fame class, sported a full eight "comes into play tapped" Invasion lands alongside Dromar, the Banisher's lair and piloted it to the Top 8 of a Masters series.

Arcane Sanctum is an obvious upgrade to its Planeshift counterpart. I'd expect to see a card like this in a lot of the more flamboyant decks of future Standard and Block Constructed formats. It makes great friends with Reflecting Pool. It couples well with your Vivid Creek in blue-based multicolor decks that would really only be running their Vivid Meadow and Vivid Marsh as "comes into play" tapped lands number five through eight for pool support.

As you may have assumed, this is just one of a five-card cycle. Each of the five shard-based color trios will have its own uncommon "comes into play tapped" land, so if your collection has been lacking in the mana-fixing department, you can happily expect some help in the very near future.

Out of the Bag

"Jacob, I sure do love drawing some land. You know what I really hate, though? Drawing too many lands. Is there something I can do to draw more action in the late game?"

"You can play Endless Horizons."

"But Jacob, we just got done discussing our multicolored nature. Surely there's a way to thin out my deck and fix my mana at the same time." 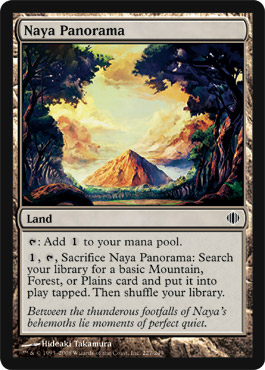 You may not be so enthralled right now. Let me assure you that this, along with its four counterparts from the other shards, is a gem. These new fetch lands are very interesting. Unlike the "fetch lands" that appeared in Mirage and Onslaught, the Panoramas have mana abilities. Also unlike the previous fetch lands, the Panoramas can find only basic lands. Naya Panorama, for example, can find a basic Mountain card, a basic Forest card, or a basic Plains card. This effect checks the card's type line, not its name, so you can find a Snow-Covered Mountain (which is both basic and a Mountain), for example. So you can't go get a Sacred Foundry. It's still a fetch land, though, so don't be too quick to dismiss it. You can tap it for mana the turn it comes into play, it can find you any of three basic lands to get you out of a jam, and it thins out your deck so you draw more action in the late game.

Get ready to show your true colors! I'll see all of you guys at the Prerelease.