A Skitter Pill to Swallow

ello, and welcome to another edition of Building on a Budget. I was battling at a local PTQ this weekend and saw a few of you bring Dating Baiting, Transmuter, or Tender Bender to play with. At least one of you was in the Top 8. I'm not sure how it worked out, but I want to give a shout out to everyone who went out this past weekend.

This week I would like to explore the possibility of building a deck around Necroskitter. Remember when you first read this card? I do. I remember thinking to myself, "This is either going to be a chase rare or a bulk rare; it could go either way very easily." Time has told its story, and Necroskitter is officially a bulk rare these days. 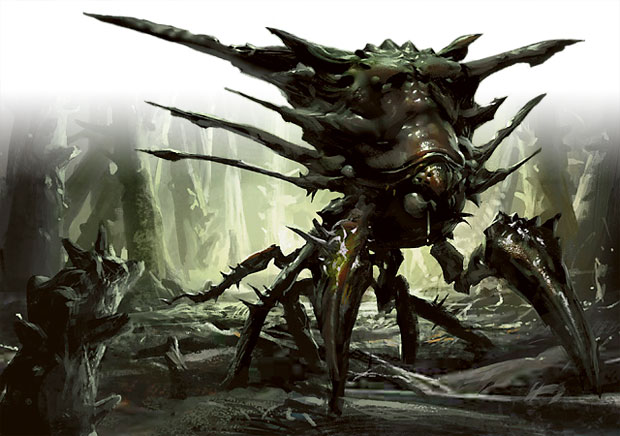 Let's start with a play set of each of these: 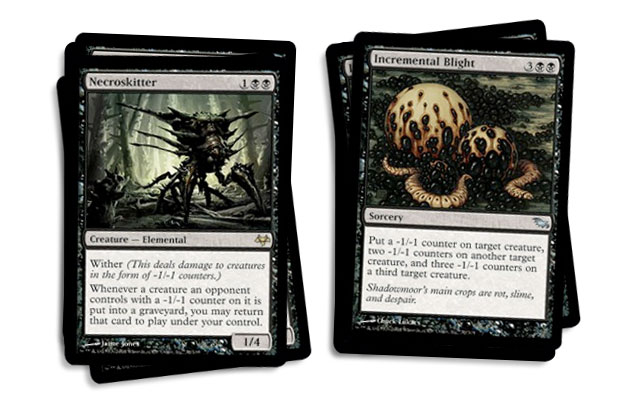 I went through the other colors to find cards that complement our eight-card deck list:

Blue and red both seem appealing, but I think there's a good chance the deck may be best if it only plays black. A version that splashes blue for Leech Bonder and River Kelpie seems strong. A green version that ramps its mana into a big spell like Grim Poppet is another route we can take.

I think the deck needs a blue or green splash. Chameleon Colossus has gained a lot of popularity recently, and a mono-black deck seems like a bad answer to a creature with protection from black. We can, however, play Snakeform. Snakeform will result in a lot of stolen Colossuses. It also seems like a fine choice against most other decks in the format.

"Snakeform your Sower of Temptation!"

We'll be more than happy to cast Snakeform against pretty much every deck in the format. Remember, if you cast Snakeform on a creature that already has a -1/-1 counter on it, the creature dies. This results in a Control Magic effect if you have a Necroskitter in play.

I'll throw together a few lists and see what we have to work with.

This is the more controlling version of the deck. Cards like Dusk Urchins are really good at grinding out card advantage. This list has a lot of removal and would do well against most decks that are being played in today's Standard. The big problem for a deck like this is Faeries. A Faeries player can easily play around most of the cards that give you an edge. There are a few fun tricks that can be used against them. For example, I was playing this version on Magic Online this week and I had stolen a Sower of Temptation using Soul Snuffers and a Snakeform. My opponent tried to Remove Soul my Midnight Banshee, and I cast Scar on a Spellstutter Sprite. The Necroskitter triggered, the Spellstutter Sprite came into play under my control, and I countered the Remove Soul. Seems fair.

If your local metagame is light on Faeries I strongly suggest sleeving up this version and giving it a try. It does very well against Green-White Tokens, Black-White Tokens, Elves, Red-White Tokens, Kithkin, and most Reveillark decks.

This version is much more aggressive. It has a much better game against Faerie decks, but you sacrifice a lot of percentage against the aggressive decks that were handily crushed by the blue version. Tower Above seems like a really strong card right now, and I wouldn't be surprised if that card alone is enough to make this version the better choice against a random field.

This version seems like it has the rawest power. A deck like this has the ability to beat just about everything. Unfortunately, we have to make some sacrifices when it comes to our mana base. You may notice that this list is lacking in the Snakeform department; we already have Puncture Blast to deal with Chameleon Colossus in this list, and there just isn't room for Snakeform pre-sideboard.

I played a bunch of tournaments on Magic Online with the blue version earlier this week. I'd suggest building a new sideboard depending on your metagame. My sideboard changed between almost every match I played. This is what I was working with:

Reveillark decks have been gaining popularity, and Slave of Bolas is a really good tool if you want to beat those people. When you Slave of Bolas a Reveillark—"That's game, boys."

Consign to Dream is a great tool against green decks. Most people will side in their Loxodon Warhammers with plans to equip it onto a Chameleon Colossus. After board we have Snakeform and Consign to Dream. We'll get a lot of tempo advantage here—seems great.

Deathmark is an obvious inclusion against White Weenie and Elves.

I'm going to share a few matches to illustrate how the deck works. 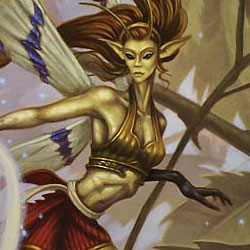 I lose the roll and keep Terramorphic Expanse, Swamp, Swamp, Scar, Necroskitter, Agony Warp, and Midnight Banshee. My opponent plays a land and passes. I draw Soul Snuffers, play Terramorphic Expanse, and pass. My opponent plays Bitterblossom on turn two, and I pop my Expanse and find an Island. I draw Dusk Urchins and play my Swamp. My opponent makes a token, plays a land, and passes. I draw an Island and attempt to play Dusk Urchins, but my opponent plays Spellstutter Sprite and counters it. He makes another token and attacks for 2. I draw another Soul Snuffers and attempt to play one. It sticks, and I wipe my opponent's token army. He makes a Scion of Oona on my end step. On his turn he plays a fourth land and attacks for 1. I draw a Swamp and attempt to play Necroskitter; it also sticks. I attack with Soul Snuffers, and my opponent takes the damage. On my end step he goes for another Scion of Oona, but I play Scar targeting the first and steal it. My opponent attacks for 3 and passes. During my upkeep he plays Mistbind Clique. I draw a land, play my land, and am forced to pass. My opponent attacks me again and has a second Mistbind Clique. Unfortunately, the Faeries player drew a pair of Mistbind Cliques—it's pretty hard to beat this regardless of the deck you bring to town. 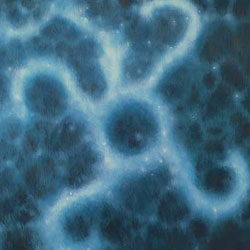 I keep Swamp, Swamp, Swamp, Snakeform, Necroskitter, Soul Snuffers, and Soul Snuffers. I play a Swamp and pass. My opponent Thoughtseizes me and takes my Necroskitter. I draw Midnight Banshee, play my land, and pass the turn. My opponent plays Bitterblossom and passes. I draw a Dusk Urchins, play it, and pass, and my opponent plays a third land. I draw a fourth land and attack with Dusk Urchins, but my opponent plays an Agony Warp before Dusk Urchins gets its counter. I have no other play except Soul Snuffers killing the Faerie token. My opponent makes another Faerie, plays a fourth land and passes. He has Mistbind Clique for my upkeep; I draw a Terror, but I'm forced to pass the turn back. My opponent attacks me for 4 and passes. I draw a Swamp, play it, and attempt to play my Second Snuffers. My opponent hits it with Cryptic Command, drawing a card. He attacks me again and plays a sixth land. When goes for another Mistbind during my upkeep and I try my Terror, he has a Spellstutter Sprite. Boo! 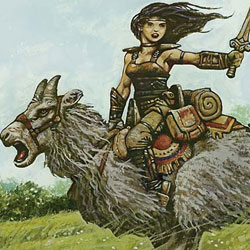 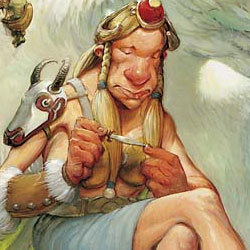 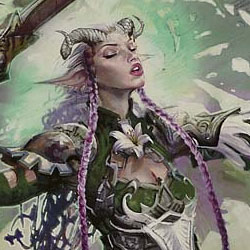 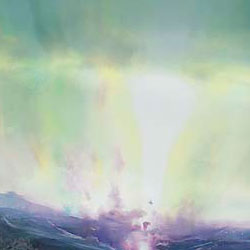 I really like how powerful Necroskitter can be in the right deck. I threw a lot of lists out here today. If you guys like this concept, I'll be glad to further explore it in the coming weeks.