ast week I discussed a new Standard combo made possible by Rise of the Eldrazi. This week I'd like to continue my exploration of the new format. Last week I mentioned that I wanted to play with Eldrazi Conscription in the new Standard format. Eldrazi Conscription is an incredibly powerful spell. Its existence and playability completely changes the way your opponents need to play against you. It becomes extremely dangerous for your opponent to tap out if you have eight lands in play. Let's take a look at Eldrazi Conscription for a moment. With +10/+10, trample, and annihilator 2, it's very clear that this is the most powerful Aura card ever printed. Now we just need to find a way to abuse it. 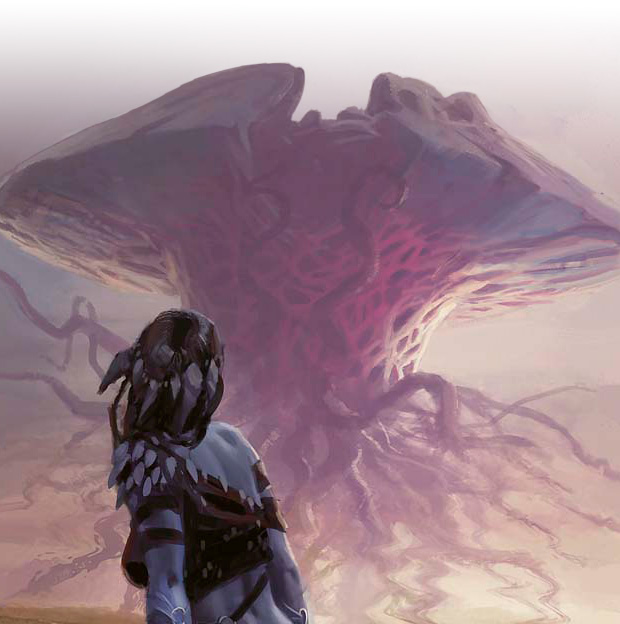 The most powerful combo available with Eldrazi Conscription is Sovereigns of Lost Alara. I've been working on a whole slew of Eldrazi Conscription / Sovereigns of Lost Alara decks. The most obvious inclusion seems to be in Mythic, the Bant deck played at Pro Tour–San Diego by Sam Black, Gaudenis Vidugiris, Zvi Mowshowitz, and others. Unfortunately, that deck plays a ton of fetch lands, Lotus Cobras, Baneslayer Angels, etc. I wanted to find a budget deck that could abuse this strategy. I'm very happy with the list I found.

So, what exactly is the combo?

If I cast Sovereigns of Lost Alara and attack with a single creature, I can search my library for Eldrazi Conscription and attach it for free. That's it.

I needed to make sure the deck could reliably get to six—even eight—mana without sacrificing the threat count. I wanted to play creatures that actually net card advantage instead of simple efficient beaters. (I didn't want to build a deck that simply folded to a Day of Judgment.) 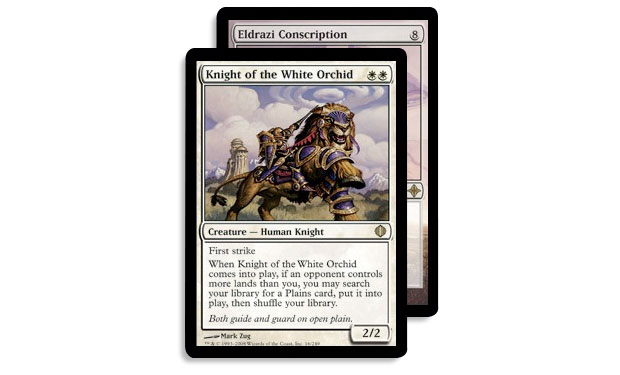 The first card that came to mind here was Knight of the White Orchid. I've always been a big fan of this card. I came in second place at a PTQ where I played four Knight of the White Orchid with four Fieldmist Borderpost and four Path to Exile. The Knight almost always netted me the extra Plains and I found myself burying my opponents in card advantage. I knew I wanted to include this package in my new "Sovereigns of Found Conscription" deck, but I needed to round out the rest of the 60. 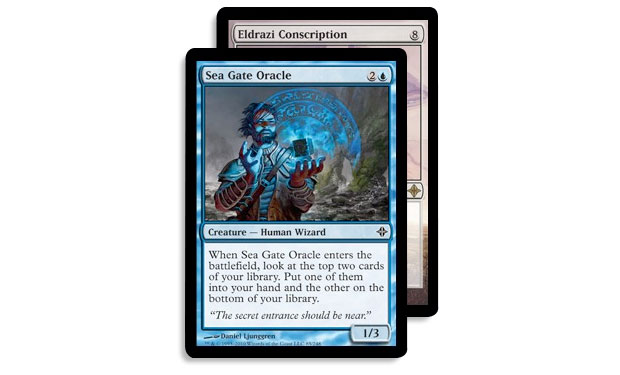 Sea Gate Oracle is another awesome card from Rise of the Eldrazi that helps us keep up on cards without getting behind on the board. The 1/3 body may seem irrelevant, but White Weenie is bound to make a comeback with cards like Student of Warfare, Transcendent Master, and Gideon Jura. Sea Gate Oracle essentially blanks an attacker against decks packing cards like White Knight. The fact that Sea Gate Oracle also replaces itself, with a small amount of card selection, makes it an incredible addition to the deck. 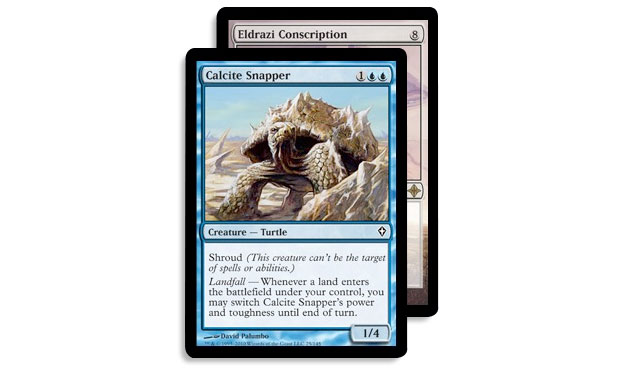 Calcite Snapper seems like a great card in a deck like this. Sovereigns of Lost Alara does not target the single attacking creature. Think about it. Your opponent taps out on his or her fourth turn to cast Bloodbraid Elf, cascading into Blightning, and you discard two cards. You already had five mana sources in play thanks to Knight of the White Orchid and a Fieldmist Borderpost. Now it's your turn. You play your sixth land, switch Calcite Snapper's power and toughness, cast Sovereigns of Lost Alara, and attack with Calcite Snapper. That's 15 trampling damage. If it isn't enough to kill your opponent on the spot (which it usually will be), then you have an 11/14 trampler with annihilator 2 and shroud. Seems like a fine place to be. 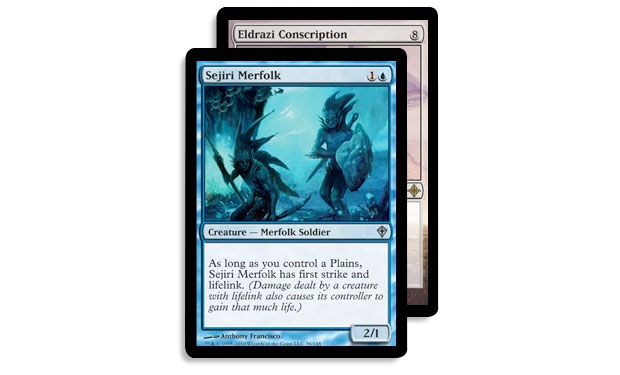 Sejiri Merfolk is another powerful spell that thus far hasn't received its fair share of play. Knight of Meadowgrain was a staple in white decks while it was in standard, and this seems like it's almost as good. I thought about playing Wall of Omens in this spot, but I wanted more creatures that could attack and be suited up with a Conscription. This seemed like a good choice. The Lifelink is incredibly relevant in a lot of matches. I like playing creatures that my opponent will actually want to use removal on. I'd rather have removal pointed at my two-drop than at my Sovereigns of Lost Alara. Also, lifelink is a pretty good ability for a 12/11 to have.

Sovereigns of Lost Alara is surprisingly robust. It has 5 toughness—the magic number plus 1. Path to Exile, Doomblade, and Terminate are the only commonly played cards that can deal with the Sovereigns at instant speed. Bituminous Blast, Lightning Bolt, Burst Lightning, Searing Blaze, Disfigure, Urge to Feed, and Staggershock all fail when it comes to dealing with the Sovereigns as soon as it hits the table. Sure, cards like Maelstrom Pulse still kill the 4/5, but your opponent doesn't have the chance to take another turn. If you get to attack with a creature, your opponent will be staring down one giant Conscripted creature and the Sovereigns. Your opponent has to kill both of them, if you get another chance to attack and Sovereigns is still on the battlefield, then your opponent will, again, have to deal with another giant monster. 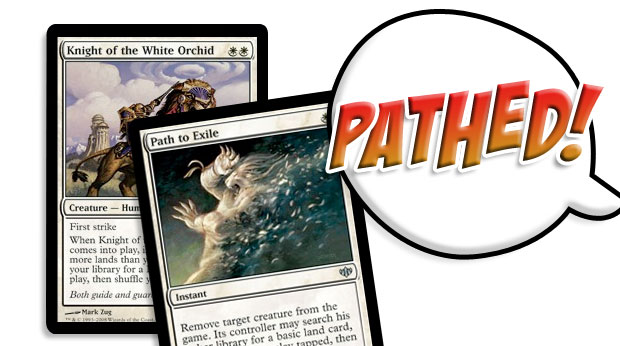 See Beyond is another exciting card from Rise of the Eldrazi. A lot of time this deck may find itself with an uncastable Eldrazi Conscription in hand. It's very simple, you draw two cards for one mana and shuffle the card with a gigantic mana cost back into your deck. If you're in the late game and have plenty of land you can simply shuffle a land back into your library. This seems like an excellent cards selection tool. I'm eager to experiment and see if this card is worthwhile.

My favorite trick happens when my opponent casts a second Polymorph and finds a second copy of Emrakul, the Aeons Torn. I like to Oblivion Ring my first Journey to Nowhere or Oblivion Ring and make my opponent shuffle both copies of the card back into his or her library. It may seem silly to offer a chance of drawing a third Polymorph, but I'd rather roll my dice with my opponent drawing a third and me not having a Journey or Oblivion Ring than risk an Into the Roil on my Journey to Nowhere for an end-of-turn Emrakul, the Aeons Torn.

Another trick that I find useful is the waiting game. When you're not sure if it's right to cast the Conscription, the best plan is often to take a little while to think about the decision. If your opponent waits patiently, pumps his leg, breathes heavily, or leans back, then it probably means he or she has the instant speed removal spell in hand. However, if your opponent is eager for your turn to end without incident, holds his or her breath, brings up something not related to the game, or comments on a nearby match then it probably means one of your creatures is getting +10/+10 and heading for the red zone.

Reading people is something that most Magic players never try to learn. I find tells to be a very important part of the game. Being prepared isn't necessarily all about playing the best deck or knowing how to play particular matches. Sometimes it is most important to know what disruption your opponent has and to watch him or her play. What was your opponent doing just prior to that two-for-one? The opponent won't know it, but he or she will probably do the same thing the next time a game-changing play comes up. Looking for these types of things has been incredibly important in my development as a player.

Sharpen up your understanding of body language and get ready to swing for 14! Here's the completed list.

The deck is everything I could ask for from a budget list. It has incidental card advantage, reasonable bodies, awesome removal, awesome combo potential, and a very scary endgame. Trade for some Eldrazi Conscription and sleeve this one up if you have a chance. The deck is a blast to play, and it actually has a lot of really good matchups.

Bonus: Rise of the Eldrazi Drafts

I was lucky enough to find four Rise of the Eldrazi drafts this past weekend. I learned a lot about the format and figured a lot of my readers might want to know the inside scoop on the new format. First off, green is very good and very deep. Next, Surreal Memoir has a lot of potential. I had one deck with eight instant-speed removal spells and three copies of Surreal Memoir. I only played six creatures, but I never had any trouble killing every threat my opponent played. There seem to be a lot of creatures in this set that don't really affect the board. You can usually save removal spells for giant Eldrazi monsters and level up creatures. Everything else can hang around and not cause too much of a problem.

Some cards are a lot better than they seem at first glance. For example, Regress would normally be playable as a twenty-third card you are not very happy about. In this set, however, people often have to use a great deal of resources to play their eight-, nine-, ten-, or eleven-drops. The ability to strand those cards in your opponent's hand is really incredible. All the level up creatures are absurd in Limited. Letting a single leveler get to its maximum potential is a huge issue. Again, this makes a card like Regress a lot more powerful. The new draft format seems incredibly exciting, and I highly recommend you find a draft at your Launch Party this weekend. This may actually be my pick for the most fun draft format of all time.