Posted in Building on a Budget on December 2, 2009

pike is an interesting character. Spike is the player who thinks long and hard to make the correct play every time, something most of us strive to do. Spike also tends to be the person who gets upset when he loses, something that hopefully we all strive not to be. Winning is what Spike came to do, and he or she won't be happy with a bad showing.

I wasn't sure how to approach Spike Week. My reader base is very anti-Spike on the forums and in emails. In response, I have done my best to keep things fun and easy-going. I know I have Spikish tendencies, but so do most people. In every game of Magic there is a clear goal: win. Having fun is certainly more important in the long run, but winning is the objective in any one given game.

I decided building a deck that wins was the best way to pay homage to Spike. I called some friends, did some research, and found a deck that Spike would be happy to sleeve up.

Scapeshift is a card I have wanted to play with for a while now. I got really excited when I saw a deck tech with Ben Stark during Worlds a few weeks ago. I'd been thinking about Scapeshift in relation to Knight of the Reliquary or landfall; Valakut, the Molten Pinnacle had never even crossed my mind.

Here's how the "combo" works, for those that haven't seen the deck. You get to seven lands with cards like Search for Tomorrow and Sakura-Tribe Elder, cast Scapeshift getting six Mountains and Valakut, the Molten Pinnacle, and deal 18 damage to your opponent. Most players will have taken a bit of damage off their lands and 18 will be plenty. If your opponent is not at eighteen you have to wait until you have an eighth land. When you have eight lands you can search up two Valakut, the Molten Pinnacle and six Mountains to deal a smooth 36 damage to your opponent.

I decided to make the deck straight red-green to start. I wanted to see how budget we could get. I scoured Gatherer for a bit and came up with the following list.

This list turned out to be very strong against the more aggressive decks in the format. Burn and Zoo both have a lot of trouble racing you. The big problem with this list is its weakness to combo and control decks. The card selection isn't very exciting either. I found myself playing a bad Rock deck that took eons to draw a game-winning Scapeshift a lot of the time. This is a great list if you play casually with your friends and want a fun and relatively strong Extended deck that costs less than 20 tickets. Also, Lignify in the sideboard turned out to be the best way to deal with opposing Tarmogoyfs in a defensive red-green deck. I figured this may be a valuable piece of information to put in your back pocket for a rainy day.

Spike wouldn't bring this deck to a tournament. He can't have such low win percentages against such a large portion of the field. This deck lacked the power one expects from Spike. I decided to do what any Spike would do ... add blue!

I had a lot of trouble building a budget mana base for this deck. I called a number of friends and asked them to help me make it work. Brad Nelson came through and put together a surprisingly elegant mana base. He was even kind enough to give me an up-to-date breakdown on the costs of the lands: 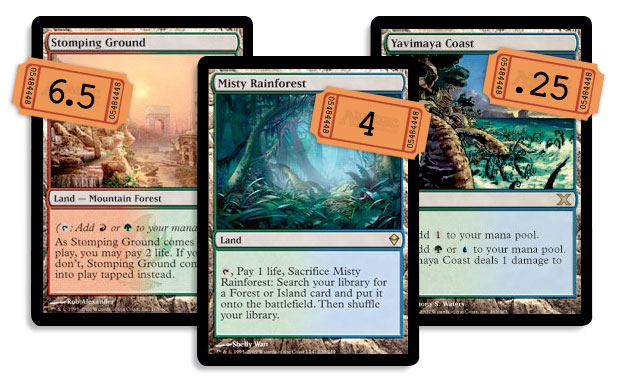 This manabase costs under 25 tickets. This may seem pricey for Building on a Budget, but the rest of the deck and sideboard doesn't use any expensive cards. In fact, every other card in the deck except for Remand can be found by savvy shoppers for less than 0.5 tickets. Unfortunately, the lands are necessary to the way the deck functions. The deck still comes in at around 35-40 tickets.

This version tested very well. At first I lost some games to misclicks and bad draws, but I found it was very hard to lose once I started getting into a rhythm. I played on Magic Online until I found opponents slinging a few major archetypes. Spike needs to know how every matchup works. 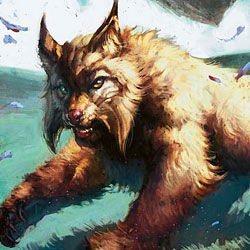 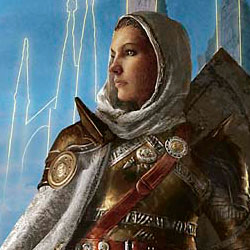 I kept Forest, Mountain, Mountain, Sakura-Tribe Elder, Harrow, Search for Tomorrow, and Scapeshift. My opponent cast a Wild Nacatl and passed. I drew a Harrow and suspended my Search for Tomorrow. My opponent attacked for 3 and cast another Wild Nacatl before passing. I drew a Remand, cast my Sakura-Tribe Elder, and passed the turn. My opponent cast Lightning Bolt on my end step, played a third land, and attacked with both Wild Nacatls (one of which I blocked with Sakura-Tribe Elder, which I sacrificed). He then cast a Knight of the Reliquary. I found an Island with my Search for Tomorrow, drew a Firespout, and thought for a moment. I did the math and found I was one mana short of the turn-three kill (which, as it turns out, is impossible with this deck). I cast a Harrow and a Firespout and passed the turn. My opponent cracked for five with his Knight of the Reliquary and cast a Tribal Flames to put me at one before passing the turn. I cast my Harrow and killed him the next turn. 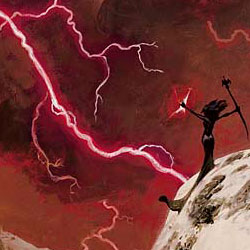 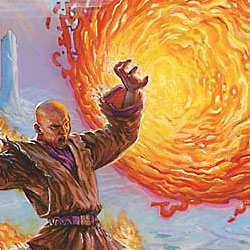 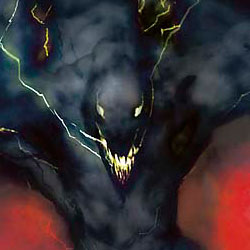 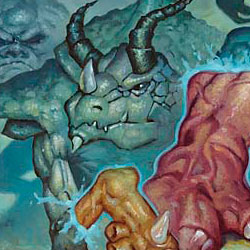 I won the roll and kept Forest, Mountain, Mountain, Search for Tomorrow, Sakura-Tribe Elder, Harrow, and Remand. I suspended the Search for Tomorrow and passed. My opponent played a land and passed. I drew another Forest, played it, and cast Sakura-Tribe Elder. My opponent played another land and passed. I sacrificed the Sakura-Tribe Elder on his end step to find an Island. I searched for a second Island during my upkeep, drew a Peer Through Depths, played my land, and passed the turn. My opponent cast a Violent Outburst and cascaded into Hypergenesis, I cast Harrow into Remand, cantripping into a Rewind. I drew another Peer Through Depths, played my sixth land, and passed the turn. My opponent cast another cascade spell into another Hypergenesis, which I countered with Rewind. I cast a Peer Through Depths on his end step and found a Harrow, then cast the Harrow, cast the other Peer through Depths, and found a Scapeshift. I drew a Search for Tomorrow for my turn, cast it, and cast Scapeshift for 36 damage. 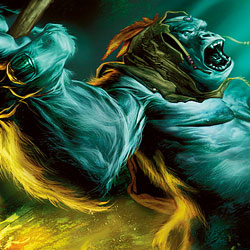 I started with Island, Forest, Mountain, Search for Tomorrow, Sakura-Tribe Elder, Harrow, and Magma Jet. I thought for a moment and decided to mulligan. A hand like that certainly won't beat a turn-three Hypergenesis unless it topdecks a cheap counter. I like my six better: Stomping Ground, Misty Rainforest, Valakut, Spell Pierce, Remand, and Harrow. My opponent played his land and passed. I drew another Harrow, played my Misty Rainforest, and passed the turn. My opponent had the Simian Spirit Guide and he went for the turn two kill. I Spell Pierced the Hypergenesis. I drew another Forest, played my land for the turn, and passed. My opponent tries to go off again but I have Remand at the ready. I cantrip into a Scapeshift. I drew another Harrow, played my third land, and passed the turn. My opponent simply passed with no play. I cast Harrow on his end step, dodge the Violent Outburst, drew Peer Through Depths for my turn, played my land, and passed the turn. My opponent passed again. I cast Harrow and Peer Through Depths for a Search for Tomorrow on his end step. I draw a Valakut, the Molten Pinnacle and do the eight lands for 36 damage thing.

This deck is extraordinarily powerful. It may not be very original, but it really tests your brain. Spike enjoys the mental challenge. Spike wants to prove something. Spike can pilot a very difficult deck to a strong win percentage.

Here's the list that Ben Stark played at Worlds this year:

Posted in Building on a Budget on December 2, 2009