prouting Souls was one of my favorite decks I've ever designed. My friend, Jon Keefer, used to regale me with stories from his casual group:

"My opponent Day of Judgment my board when I had a Sprouting Thrinax in play. I untapped, cast a Torrent of Souls, and bashed for 14. It wasn't even close."

The Extended portion of Worlds is in the books, and it looks like there's an opening for Sprouting Souls to sprout once more. A lot had happened since two years ago, the deck gets a massive boost in power when exposed to the Extended card pool.

The most important addition available is Bloodbraid Elf. Bloodbraid fills just about every role you could imagine. The deck thrives on token generation. Bloodbraid generates "tokens" in a sense by dropping multiple threats onto the battlefield off a single card. It's always nice when you realize that the card with the most synergy for your deck is also the most powerful card in the format.

I began working on this deck a little over a week ago. Initially, it looked a bit wonky. In time, it started looking more and more like a Jund deck that actually had a plan. That has always been my issue with Jund; The deck never looked like it had a plan. Someone simply decided to mash together all the best cards available in the format and they called it a day. This deck takes the most powerful tools available to Jund and uses them to achieve a specific goal.

Maelstrom Pulse has always seemed clunky to me. Good players play around it enough to prevent any backbreaking two-for-ones. Sure, it answers just about everything, but I'd much rather have a real plan. I wanted the new Sprouting Souls to be its own entity, not just a budget version of the Extended Jund decks. 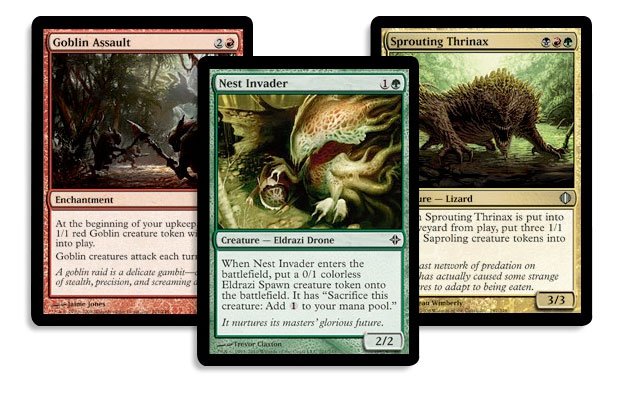 The namesake card, Torrent of Souls, is one of the most powerful cards available in Extended. It's especially powerful when combined with cards like Goblin Assault, Nest Invader, and Sprouting Thrinax.


The list isn't perfect, but it's very powerful, given how easy it is to acquire all the cards. I'll start by explaining the card choices.

Blightning wasn't in my original list, but a friend urged me to give it a try. After a few games of testing it was clear to me that Blightning needed to be in the main deck. There are a lot of games where the opponent mulligans and you happen to have a Blightning in hand or on the top when you cast a Bloodbraid Elf. These games are very easy to win. Blightning never feels exceptionally powerful when you're the one casting it, but being on the other side of the table makes its power significantly more apparent.

Dragon Fodder is, well, fodder. I wanted another token generation card in the two-mana slot and this seemed like it fit the bill. Bitterblossom would probably be better in this spot, but that card is going to be very difficult to trade for, especially with Extended season right around the corner.

Garruk Wildspeaker is very easy to trade for these days. The card is always very powerful, but it works especially well in a deck like this. The Overrun ability is almost always enough to close the game and the stream of 3/3s can be very difficult for most decks to deal with.

Lightning Bolt is another card that the original deck would have absolutely loved. The deck doesn't want to use more than one mana on spot removal spells, so having access to the best one-mana removal/burn spell ever printed is pretty nice.

Putrid Leech may not generate tokens, but in the world of two-mana creatures, 4/4s are about as good as it gets.

Nest Invader is a great addition. It provides two bodies for a single card and it can help ramp into some very powerful things. Turn three Bloodbraid Elf or Garruk Wildspeaker is enough to put most decks out of the game.

Sprouting Thrinax is obviously the best creature a deck like this could ask for.

Goblin Assault plays a very interesting role. A lot of players think this card is bad because players can simply leave their creatures back to block. Ervin Tormos was the first player to explain how Goblin Assault works in a top-end aggro deck.

"It makes other aggro decks play defensively," Ervin explained, "when they start blocking, it gives you time to do more powerful things than their deck can accomplish." Well put, Ervin. This seems like the kind of deck that can use that logic to its fullest potential.

I needed to build a sideboard, the matches that have caused me the most trouble are Elves! and Steel Artifact. I scoured Gatherer for cards that would do well in both matches and I was pleasantly surprised to find Arc Trail. It's a new card, I've been playing with it in Limited and Standard for the past few months. Arc Trail does an excellent job neutering the super aggressive starts that can be achieved by both of these decks.

It wasn't enough against Steel Artifact, though. The deck put a lot more power on the table than I did, and it did so at such a pace that I couldn't keep up. I needed a card that got me back into the game regardless of my previous board position.

Faeries hasn't been a problem, but the games I lose usually involve more than one Cryptic Command. The same can be said about Five- or Four-Color Control. I decided that Guttural Response was the best card for this slot.

I rounded out the sideboard with a playset of Duress to help my combo match-ups. The combination of Duress and Blightning is usually enough to finish off combo players before they can assemble their big finish.

That being said, I've also taken some time thinking about ways to beat Emrakul, the Aeons Torn. It may sound crazy, but I feel like Sarkhan Vol may be the next step for this deck. I haven't tested it yet, but it seems at least as powerful as Garruk. It's nearly impossible for the Polymorph decks to beat a resolved copy of this card. 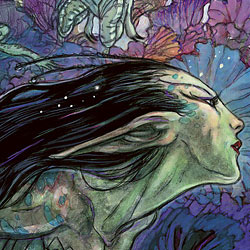 I drew another Savage Lands, cast another Bloodbraid Elf, flipped into Sprouting Thrinax, which my opponent countered with a Spellstutter Sprite. I attacked with my team and my opponent double blocked a Bloodbraid Elf and took 6, going down to 8. My opponent played another land, and passed the turn. I drew a Blightning, went to my combat step, my opponent cast a Cryptic Command tapping down my team and returning Goblin Assault back to my hand. I cast Blightning and Lightning Bolt to put my opponent at 1. My opponent died to Bitterblossom the next turn. 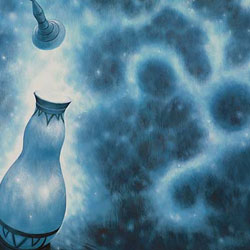 Faeries is a pretty good match-up for this deck. Sprouting Thrinax is especially strong here. The Faerie deck has a lot of trouble with such a huge portion of your cards. 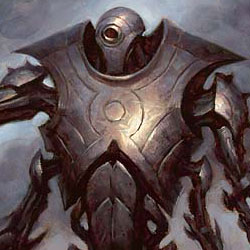 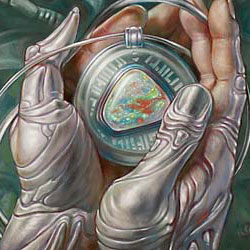 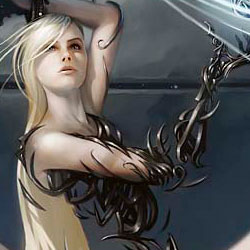 The deck does very well in the current Extended metagame. If you're looking to play a non-budget version I would probably go with this.


Questions and comments are always welcome on the forum or in an email.