ello and welcome to Lord Week here on DailyMTG.com. Today, I'd like to talk about my favorite lord in Standard: Grand Architect is a lord for all blue creatures. It survives Whipflare, un-metalcrafted Galvanic Blast, and most Black Sun's Zeniths. Perhaps the most exciting part about Grand Architect is his ability to turbocharge your mana.

I've had some pretty big ideas in the past when I've used Grand Architect. I usually have a Wurmcoil Engine or Mindslaver somewhere that's ready to come down after I've assembled some blue guys with a Grand Architect. Today, I'd like to play more on the safe side. I'm going to be using Grand Architect's activated ability to advance my board state with cards like Spined Thopter or to punish opponents for tapping out with a huge damage-output card like Runechanter's Pike. 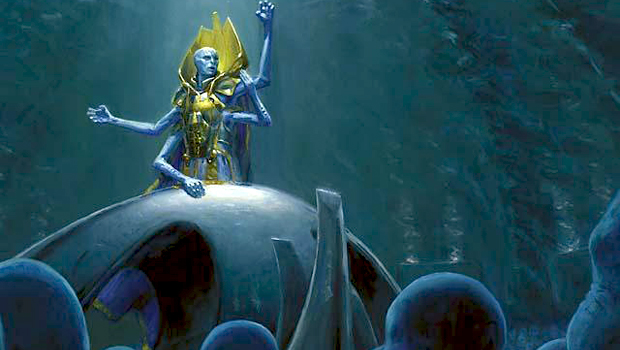 Invisible Stalker is worth a slot in any deck that intends on attacking with Runechanter's Pike. This card has given me nightmares ever since it was first printed. In Limited, I have been on the receiving end of Invisible Stalker with Equipment or creature enchantments far more often than one would expect. The card's ability to steal games is just as alive in Standard. Not too long ago, it wouldn't be unusual to see decks with Tribute to Hunger or Geth's Verdict in the main deck, but Lingering Souls has changed how people build their decks' removal suites and now it's extremely uncommon for players to have anything besides Day of Judgment or Black Sun's Zenith to deal with Invisible Stalker.

Delver of Secrets is absurdly powerful. So, who wants a 3/2 flier for one mana? Sure, the deck is only 33.3% cards that flip Delver, but you should be able to finagle those odds a bit with a play set of Ponder. Delver draws are close to unbeatable, and I felt like any blue-based aggressive deck just wouldn't be proper if it didn't have the ability to cast a Delver of Secrets on turn one and show the opponent a Mana Leak to flip the Delver on turn two.

Ponder is perfect here; I would play ten copies if I could. It sets up Delvers to flip, it finds key situational cards, it fuels our Runechanter's Pike, and it helps set up big Grand Architect turns.

There isn't much to say about Gitaxian Probe. It's a cantrip that gives us a peek at our opponent's hand. It fuels our Runechanter's Pike and it tells us what we need to play around and helps us decide which turns we need to be leaving mana open to use spells like Mana Leak and which turns it's safe to tap out for a nice juicy threat.

Vapor Snag isn't a card I really expected to be so big, but it keeps finding its way into decklists. I was wary about including Vapor Snag in a deck that didn't have Snapcaster Mage, but I found that a lot of the Vapor Snag draws just ran people over before they had an opportunity to interact in any way at all. Speaking of Snapcaster Mage, that card would have a place in this deck if it were easier to acquire. I would cut one Runechanter's Pike, one Invisible Stalker, one Grand Architect, and one Dissipate for four copies of Snapcaster Mage if I had the opportunity to pick them up.

Thought Scour is another cantrip. Cheap cycling cards are excellent ways to reliably flip Delver of Secrets, but Thought Scour can do some really exciting things with a Runechanter's Pike or Snapcaster Mage—if you're lucky enough to be playing with the latter. It's a valuable combat trick with the Pike. A lot of time, you're going to want to cast Thought Scour after your opponent has announced no blockers for a creature equipped with Runechanter's Pike. You'll hit your opponent for at least an extra 1 damage, but there's a decent chance you'll hit for even more. Your opponent will have a lot of trouble doing any kind on non-chump blocking when you're packing tricks like this alongside your Runechanter's Pikes.

Mana Leak is awesome here. The format has shifted to a place where people are more likely to be tapping out on turn four for a Day of Judgment or turn five for a Gideon Jura than they are to be chaining inexpensive removal spells all the way up. This makes a card like Mana Leak into an excellent all-purpose answer that breaks apart most of the best-laid plans.

Dissipate is good for the same reasons as Mana Leak. Having access to one hard counter is nice because it can punish players for playing around a card like Mana Leak and it's likely opponents will just play right into everything once they see the presence of this. Negate is good for the same reasons, but I didn't want too many threes in a deck with only twenty lands, so I decided a one/one split was perfect here.

Dismember is an incredible removal spell for a mono-blue deck. I don't think this deck can afford the pain of more than one Dismember, considering it's already playing Gitaxian Probe and Spined Thopter.

Here's the final sixty once we put it all together:

This deck is extremely easy to get together, but you can easily invest more into it by picking up some Snapcaster Mages.

I played a few games with the deck to see how it fared against what people at my shop were playing. 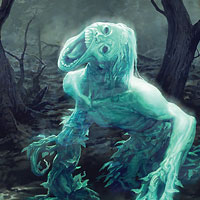 I won the roll; sent back a hand with no lands; and kept Island, Island, Ponder, Mana Leak, Grand Architect, and Dismember.

My opponent played another land, cast Sword of War and Peace, equipped it to the Strangleroot Geist, and attacked me for 4; I decided to trade my Spined Thopter for the Sword-equipped Geist.

The Red-Green Aggro deck is probably a bad matchup for us. The deck has a lot of efficiently costed creatures that snowball better than our options, but we still have draws where we cast Delver and are able to protect it throughout the game. The red-green decks have trouble dealing with flying creatures of any stripe.

This deck does some good work in the efficiently costed flying-creature department. Grand Architect is also a nice answer to Strangleroot Geist—sure it bashes in and just becomes a 3/2 for two mana, but I'm not really worried about Garruk's Companion so much. 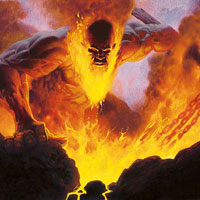 My opponent played a Rootbound Crag and passed the turn. I drew a Ponder and cast Delver of Secrets. My opponent cast Faithless Looting, discarding Elesh Norn, Grand Cenobite and Lingering Souls, and passed the turn after playing a Blackcleave Cliffs. I drew a Grand Architect; attacked for 1; cast Ponder; and put Island, Ponder, Runechanter's Pike on top of my deck in that order to draw the Island.

My opponent played a third land, cast Avacyn's Pilgrim, and flashed back the Lingering Souls. I revealed Ponder, flipping Delver of Secrets into Insectile Aberration. I attacked for 3; my opponent double-blocked with the Spirit tokens and I used Vapor Snag to kill one token to allow my Delver to live through combat with the other token. I played a third land and passed the turn. My opponent played a fourth land and cast Unburial Rites, targeting Elesh Norn, Grand Cenobite. I used Mana Leak to deal with that and was able to get another turn.

I drew Runechanter's Pike, cast Ponder, shuffled my deck, drew an Island, played an Island, and passed the turn after attacking for 3. My opponent went for the flashback on Unburial Rites and I had Dissipate this time around. After playing a fifth land my opponent passed the turn. I drew another Island, played it, cast Runechanter's Pike, and attacked for 3.

My opponent cast an Inferno Titan and I had to let it resolve with only a Negate in my hand. The Titan killed my Insectile Aberration and dealt me 1. I drew another Island for my turn and was forced to passed. My opponent attacked me for a lot of damage and showed me another Inferno Titan. That's good enough...

Frites is a pretty terrible matchup for a deck like this. You should probably include some number of Surgical Extractions in the sideboard to deal with it. Also, just playing more countermagic will also make you have a significantly stronger chance against Standard's favorite combo deck.

Grand Architect is my favorite lord in Standard. I'm excited that I had the opportunity to write about it again and I'd love to see your feedback on this type of strategy. The deck might have had some trouble in the few games I had the opportunity to play, but I strongly urge you to put the deck together. The deck matches up very well against most decks you'll come across at the FNM level. One can acquire the entire deck with relative ease and win a lot of sanctioned matches.