ast week we explored a defender-themed control deck. This week I'd like to share a little ditty that is sure to make all the Johnnies in the room jump for joy. Training Grounds has proven itself to be a valuable Limited card in a devoted level up deck, but its applications in Constructed seem to be overlooked. 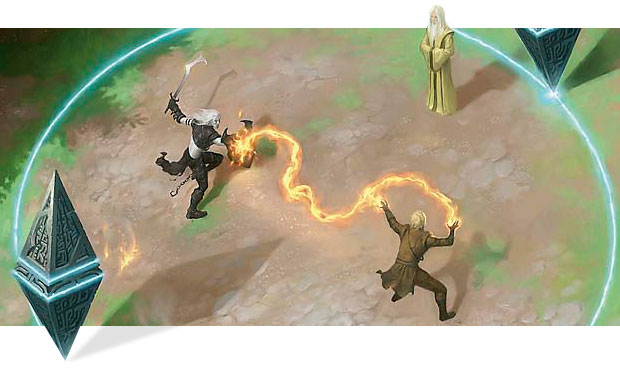 I received a deck via email from a reader, Michael Ebling, that abused the interaction between Training Grounds, Khalni Gem, and Filigree Sages. Michael's friend Frank Gibson found the combo. With these three cards on the battlefield you may produce infinite mana in any color combination of your choice.

Here's how it works: You have your Khalni Gem on the battlefield alongside your Training Grounds. You cast Filigree Sages and tap your Khalni Gem for two blue mana. You use one of those two blue mana to untap the Khalni Gem with Filigree Sages, then you tap the Khalni Gem for two blue mana. You produce infinite blue mana in this way, which you can then use to create infinite mana of any color you desire. The combo is resilient to instant-speed creature removal because you can simply use another blue mana to go infinite in response to a removal spell. For example, I played a Khalni Gem on my fourth turn and already had a Training Grounds on the battlefield. Later in the game I played my fifth land and cast Filigree Sages. I attempted to untap the Khalni Gem, and my opponent cast a Path to Exile on the Sages. I responded by activating the Filigree Sages again with the extra blue mana I had from the Gem. My opponent was ready with another copy of Path to Exile. I used my last untapped land, an Island, to respond and untap the Gem again. My opponent didn't have the third Path to Exile (They usually don't even have two!), and I produced infinite mana and had the pleasure of throwing a Banefire for twenty million at my opponent's head.

Historically, three-card combos have some inherent weaknesses. One of the biggest drawbacks to playing a full four copies of each combo piece is the problem of drawing multiple copies of a single combo piece. This will still be an issue, but See Beyond helps a great deal in that department. If you have doubles of a combo piece then See Beyond essentially reads "Draw two cards." That seems pretty exciting.

Let's take a look at the other cards that seem good enough to make the cut.

Ponder seems like an auto four-of in any Standard combo deck. The card selection provided with such little harm to your tempo is really incredible. I'll be happy to have a playset of these in my main deck. It's important to know when to shuffle with the Ponders here. Sometimes you will cast Ponder, find a card that seems great for that turn, and still be forced to shuffle. If your Ponder reveals one—or, Nicol Bolas help us, two—combo pieces that you already have in your hand, then you should almost always shuffle, unless the other cards available give you the full combo and a way to abuse it. By drawing additional copies of combo pieces you already have, you are actually drawing dead cards. (The cards can still be discarded to Blightning or be used as backups if your opponent is playing counterspells, but it still doesn't seem great.)

Mind Spring is, without a doubt, the best way to abuse infinite mana in Standard. Once we produce infinite mana we can Mind Spring for our entire library. This will find us the gigantic finisher spell we need to win. It's better to play a full four copies of Mind Spring and only one finisher spell than to play a critical mass of finishers. Mind Spring can be used as a card-draw spell throughout the course of the game. It helps us assemble the combo and it can win us the game once we have the combo together.

Smother seems like a great inclusion. Spot removal is important if we plan on surviving to the point where we can combo our opponents to death. Smother seems like a good removal spell these days. It kills the best new creature in Standard, Kargan Dragonlord, even when it gets to level 8 and threatens to attack for your life total.

Agony Warp has always been one of my favorite removal spells. Unfortunately, I haven't built many blue-black decks lately. I'm happy I finally have another deck that can support this incredible removal spell. Playing with Agony Warps again is long overdue for me.

Consuming Vapors is a new card from Rise of the Eldrazi that seems incredibly overpowered. Killing one of my opponent's creatures and gaining life equal to its toughness is already awesome, but getting to do it again the next turn seems absolutely insane. I don't mind playing Consuming Vapors when my opponent only has a single creature on the battlefield. I'll gladly kill that creature, gain some life, and get a turn where my opponent doesn't really have the option of playing a creature spell.

I want the deck to have a solid one-of package that can deal with whatever my opponent has after I draw my library with Mind Spring. Problem permanents can be dealt with via Into the Roil and any type of target-changing shenanigans like Swerve can be easily countered with the one-of Deprive.

I chose Banefire as my win condition because it cannot be countered and the damage can't be prevented. If you have trouble finding a Banefire, then it probably wouldn't be much of a downgrade to switch it to a Consume Spirit. Banefire being uncounterable is really only relevant when the Banefire happens to be in your hand when you go off. If you're casting a gigantic Mind Spring, then your opponent will likely use the counter on that anyway.

Halimar Depths seems like a great land for any Standard combo deck. If you can find some fetch lands, they work very well with the Depths. You can choose which cards you want from the top three and shuffle the rest away with the fetch land.

I went to a local shop and played a few games with the deck to get a feel for it. Forgive the not-so-exact game reports; Rise of the Eldrazi is not out on Magic Online yet, and game logs are a lot harder to record during a match of paper Magic. 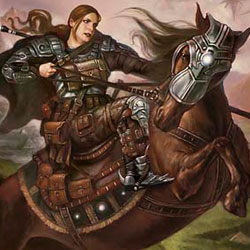 I win the roll and keep Island, Jwar Isle Refuge, Halimar Depths, Ponder, See Beyond, Training Grounds, and Khalni Gem. I play Jwar Isle Refuge, go to 21, and pass the turn. My opponent casts a Student of Warfare and passes the turn. I play my Halimar Depths, put Agony Warp, Mind Spring, and Swamp on top of my library in that order. I cast Training Grounds and pass the turn, choosing to go without casting Ponder because I want to draw the top three cards of my library. My opponent levels Student of Warfare twice and attacks me for 3, and I go to 18. I draw Agony Warp, play my land, cast Agony Warp on the Student, and pass the turn. My opponent casts a White Knight and passes the turn.

I draw Mind Spring, cast See Beyond, and draw a Swamp and a Training Grounds. I shuffle the Training Grounds back into my library and cast a Ponder, seeing Filigree Sages, Smother, and a land. I leave them on top in that order, play my land, and pass the turn. My opponent casts Elspeth, Knight-Errant, gives White Knight a pump, and attacks me for 5. I go down to 13. I draw the Smother, cast Khalni Gem, and return two lands to my hand. I then replay the Jwar Isle Refuge, go to 14, and pass the turn. My opponent pumps up his White Knight again and attacks me for 5, and I go to 9. My opponent casts Student of Warfare and levels it, leaving just one mana up. I cast Smother on the Student during my opponent's end step. On my turn I draw the land, play my land, cast Filigree Sages, and attempt to untap the Khalni Gem. My opponent tries to cast a Path to Exile on my Filigree Sages, and I untap the Khalni Gem again in response. I create two billion mana and cast a Mind Spring for the number of cards left in my library. I then cast Banefire for A LOT, and the game is over. 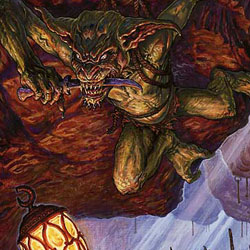 I lose the roll and mulligan into 2 Jwar Isle Refuge, Halimar Depths, Filigree Sages, Ponder, and Smother. My opponent casts Goblin Guide and attacks me down to 18. I reveal a Swamp, and it goes into my hand. I draw Agony Warp, play Jwar Isle Refuge to go back to 19, and pass the turn. My opponent plays another Goblin Guide and attacks me for 4. I reveal a Khalni Gem. On my turn, I draw the Khalni Gem, play my Swamp, and pass the turn. My opponent casts Lightning Bolt targeting me during my end step, then plays a third land, and taps all three Mountains for red. The play is Devastating Summons, sacrificing the three Mountains. Then my opponent casts Goblin Bushwhacker and attacks me for 16. I have Smother for one of the tokens, but it's still lethal damage.

I don't think you can beat that draw unless you play 40 Kor Firewalkers and 20 Plains. 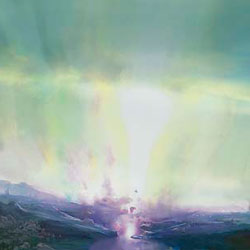 Jund did what Jund does. After the match my opponent asked what the combo was, and I showed it to him. He was pretty excited for a few minutes, then he shrugged and said, "Maelstrom Pulse is pretty good."

The deck didn't fare very well against tournament-level decks, but I still feel like this is a fun and exciting combo for your casual games. Any Standard deck that can make infinite mana should at least be looked at before it's thrown to the wind. If you're Johnny, Combo Player, then this should certainly find its way into your collection of wacky decks that do huge and exciting things to your opponent.