The Urge to Feed

elcome to the first week of Worldwake previews here on magicthegathering.com. Vampires have become a very popular archetype since the release of Zendikar. The deck can be very aggressive, and it has a lot of game against a large portion of the field. Most importantly, Vampires are awesome. Baron Sengir and friends will be happy to hear that Worldwake has a bunch of new vampiric friends and vampiric tricks to offer up.

One of the biggest problems with Standard Vampires is the apparent lack of relevant bodies. A savvy opponent will save a removal spell for Vampire Nocturnus and leave you with a lackluster assortment of 1/1 and 2/2 creatures. Bad Moon would be really nice, but playing with those in a Standard deck has not been an option since Time Spiral rotated. Unfortunately, Bad Moon is not being reprinted in Worldwake.

Fortunately, fang fans the world over will have an incredible new tool at their disposal. Without further ado: 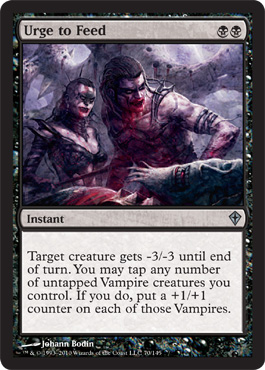 Nameless Inversion was a powerful removal spell that saw a lot of play the entire time it was Standard legal. Urge to Feed is just as mana efficient, and you get the added bonus of giving your whole team a nice boost. Instant-speed removal is always a hot commodity, Urge to Feed will fit very nicely in any aggressive decks that decide to play with Vampires. 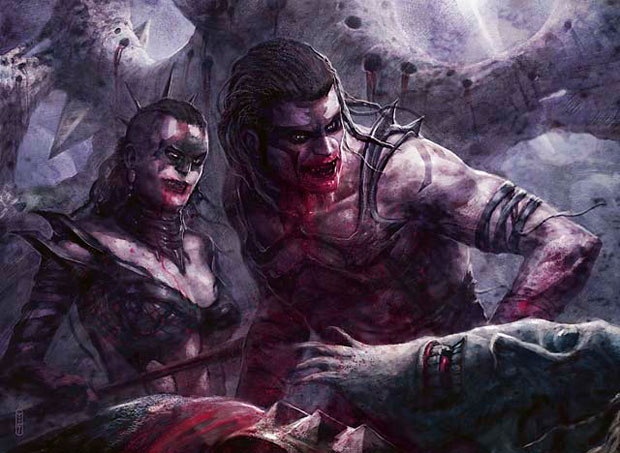 I was really impressed by Honor of the Pure when it was first printed. Glorious Anthem was always a fine card. Honor of the Pure set a new standard for the casting cost of global pump effects. Urge to Feed gives your team the same anthem effect and deals with an opponent's creature in the process.

Urge to Feed is the new best card in the Vampire deck. The power level here is really incredible. This card is, at the very least, a very efficient removal spell or combat trick. The second and third sentences on the card really make it incredible.

Imagine you are playing a game against Vampires and they have three 2/2 Vampires in play. You have a 5/5 and a pair of 2/2s. If your Vampire-toting opponent has two mana open and any cards in hand, then attacking here could be completely disastrous. Lets say you attack with all three creatures—not too unreasonable a play currently. The Vampire player could declare all three creatures as blockers and cast Urge to Feed targeting the 5/5. All three of your creatures just died, and your opponent now has an army of 3/3s staring you down.

The pumping effect is really impressive—so much so that a lot of the time players will be forced to use a removal spell on their own creature as a defensive measure. (If the targeted creature is not on the battlefield when the spell resolves, the entire spell is countered—you won't tap any Vampires.) This may seem like a drawback, but a two-mana instant that forces an opponent to use a removal spell on one of their own creatures seems like a fine deal to me.

So where will this fit into your existing Vampire deck?

My friend Dylan's vampire deck currently looks like this:

Clearly four copies of Vampire Nocturnus would be great here. Dylan only has two, though. This deck list can be made a lot more powerful if we add a playset of Urge to Feed.

4 Tendrils of Corruption 4 Urge to Feed

Urge to Feed rewards players who decide to play a good number of one-mana creatures. Dumping your hand onto the table as quickly as you possibly can becomes a very attractive plan in creature mirrors when you're packing Urge to Feed. Other Vampire decks have started to move in another direction. For example, the recent Star City Games tournament in Dallas was won by the following version of vampires:

There are a lot of things I love about this version of the deck. Grim Discovery is an excellent way to ensure that Vampire Nocturnus lasts longer than a single combat phase. Grim Discovery also works very well with all the fetch lands and "enters the battlefield" creatures like Gatekeeper of Malakir. One thing that seems a little rough is the presence of five cards that cost five mana when the deck only plays 23 lands.

Urge to Feed will not be as powerful in decks with higher curves like this one, but its inclusion will still be welcome. I wouldn't want to mess with this deck's curve, so I'd like to cut the three copies of disfigure for three one-mana creatures and cut some two-mana guys for Urge to Feed. The list that I'm left with will look like this:

Tournament Vampires with Urge to Feed

4 Tendrils of Corruption 4 Urge to Feed

This is Building on a Budget, though. Fetch lands and Vampire Nocturnus are both hard to come by. The next Vampire deck I'd like to examine is the least expensive version to date.

I'm sure a lot of you watch The Magic Show. Evan Erwin introduced his Worldwake preview in the last episode. (Now that it's been previewed, you can also find it in the Visual Spoiler on the Worldwake product page). For those of you who missed it: 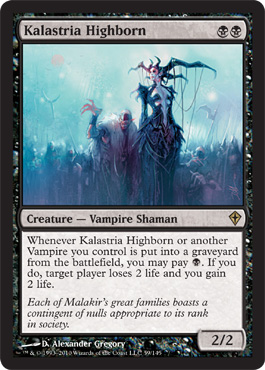 This card may weasel its way into every Vampire deck, but I think there's a list that could do some extra work to abuse the trigger. Vampire Aristocrat gives you an outlet to sacrifice your creatures. The combination of Vampire Aristocrat and Kalastria Highborn will probably be deadly in most situations. I want to make this version of the deck as aggressive as it can possibly be. I want Urge to Feed to be the best that it can be here. I decided the best way to approach a Vampire deck that did not play Vampire Nocturnus or fetch lands was to lower the curve and cut lands until the deck became more focused on killing an opponent than anything else. Here's the list I ended up putting together.

This casual deck can have some incredibly explosive turns. Kalastria Highborn ensures a steady stream of life loss to your opponent while it pads your own life total. This deck would greatly improve if you decided to put out some extra cash for a playset of Bloodghasts. The landfall on Bloodghast is especially deadly when combined with Kalastria Highborn. Your opponent won't want to block the Bloodghast and get drained so they will probably allow it to bash them repeatedly. This seems like a strong direction to take your vampire deck if you don't have enough money to invest in fetch lands and Vampire Nocturnus. 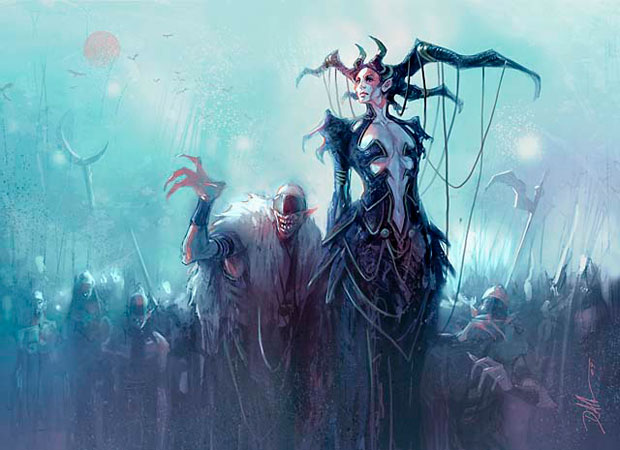 If you already enjoy the top card of your library being black then Worldwake will certainly have a lot of goodies to hunt down at the prerelease. I will be gunslinging at the Philadelphia Prerelease on January 30. If you live closeby and want to stop in to say hello I would be happy to have a chat and take a look at your deck to suggest improvements. If you can't make it to Philadelphia you should try to set aside that Saturday to visit the prerelease closest to you.

Last weekend I won an Extended PTQ with a Combo Elves deck designed by Chris Lachmann. The deck can easily be converted to fit a budget, and I thought you guys might want to take a look:

The list I ran played a bunch of fetch lands and one Stomping Ground, but this list is still a powerhouse. Cloudstone Curio is one of the most exciting cards I've gotten to play with in a long time. I couldn't find any copies of the card in my collection, but I managed to find enough of them in a vendor's junk rare box before the tournament.

Try sticking Cloudstone Curio as soon as you possibly can when playing this deck. Once you have the Curio in play you should remember the following combos:

Cloudstone Curio is especially exciting when you draw a Glimpse of Nature. Glimpse essentially guarantees that you go off that very turn. 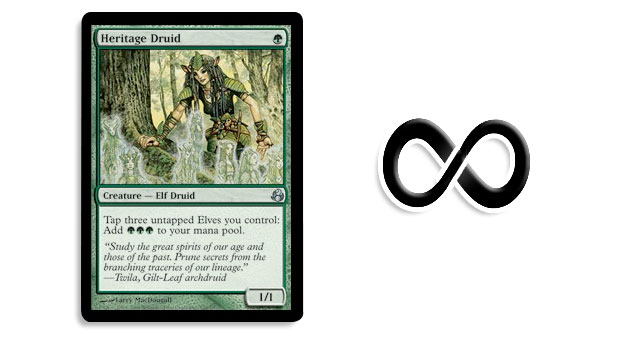 Cloudstone Curio is exciting even when you do not have a combo. Using Elvish Visionary or Eternal Witness again and again can be back-breaking in most slower games.

The rogue artifact is also a perfect tool for outplaying your opponent. In the first game of the Finals against my friend Rob Beverly, I had Cloudstone Curio, Llanowar Elves, and Heritage Druid on the battlefield with a bunch of lands. I had two more lands, Essence Warden, and another Heritage Druid in my hand. Rob had left mana open for a removal spell, and I was certainly going to lose to his attack on the next turn. I decided to cast the Heritage Druid first and demonstrate that I was going to create infinite storm. Rob would lose the game if I had Grapeshot in my hand, and why else would I be creating infinite storm anyway? He took the bait and used his Path to Exile on one of my Heritage Druids. He was tapped out after playing that Path to Exile, and I was able to cast my Essence Warden and gain infinite life against his five-color Zoo deck. Always remember your options.

The rest of the deck plays almost identically to Luis Scott-Vargas's Combo Elves deck from Pro Tour–Berlin. Be aggressive in terms of when you try to go off. If your opponent is tapped out and you think there's a decent chance you can go off, you should certainly take it. The deck is pretty forgiving is terms of letting you go off multiple times in a single game thanks to Cloudstone Curio.

I strongly suggest playing at least a hundred games with the deck if you plan on taking it to a tournament. The deck is extraordinairily difficult to play with, and you will need a good night's sleep and a strong foundation of practice games if you want to have a serious shot.

I had a great time going rogue last Saturday. I met a lot of fun and interesting people whom I'm sure to cross paths with again in the near future.