The Valley of the Shadow of Death

tandard has been evolving quite a bit these past few weeks. New decks have come from nothing and become format staples. From Tom "the boss" Ross's Boss Naya deck to Patrick Chapin's White-Blue Control deck, the format really seems to be leveling out into a beautifully varied landscape. A few weeks back I recieved an email from a reader describing his newest creation. I practiced with the deck for a few weeks and was really impressed by the numbers it put up. 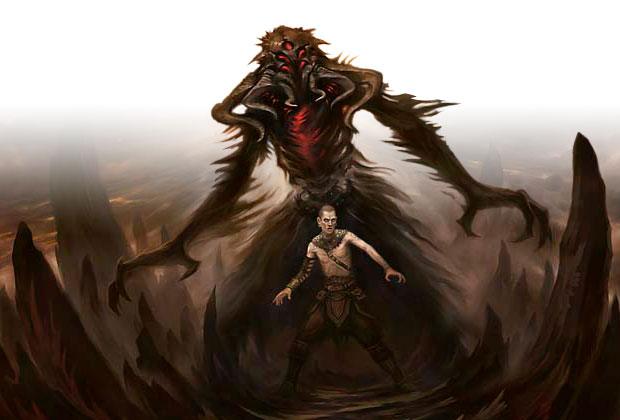 Death's Shadow is one of those cards that makes you do a double take. My initial reaction was indifference, but I failed to fully explore the options available in Standard. Angelo, a reader, sent me an email in which he explained that he had gone 4-0 at his local Friday Night Magic with a deck built around Death's Shadow. Apparently, he beat a Jund deck and two Boros Bushwhacker decks on his way to a perfect record.

Death's Shadow just seemed too situational for the rest of us. Angelo had better ideas, though, and he made a deck that used Ad Nauseam to lower his life total to the point where Death's Shadow was huge. I was excited enough when I saw the synergy between Death's Shadow and Ad Nauseum, but I was pushed over the edge by the Goblin Bushwhackers.

Goblin Bushwhacker turns this into a combo deck in a lot of ways. Your opponent can tap out and you can simply cast an end-of-turn Ad Nauseam. You flip through your library and reveal burn spells and small, efficient creatures. Your life total gets to 5 and you decide to stop flipping. You untap, cast a pair of Death's Shadow and a Goblin Bushwhacker, and suddenly you went from an empty board to attacking for 20 damage. "Enjoy that Mind Spring!"

What really impressed me about the list was its lack of dependence on the combo. The deck performed exceptionally well as an aggressive Sligh strategy. Historically, Sligh decks have had a very difficult time trying to win the long game. However, the combo kill gives the deck a strong inevitability plan. I realized that I was looking at a Sligh deck with a better endgame than most midrange decks in the format.

I'd like to start by explaining the card choices:

Death's Shadow: The deck is designed to abuse the potential of this card.

Lightning Bolt: I still have a really hard time believing this is in Standard. The raw power of this card cannot be overstated.

Vampire Lacerator: Here's our Jackal Pup. Vampire Lacerator is a two power creature for one mana that has the added bonus of ticking away our life total so our Death's Shadow can come to the party.

Goblin Guide: Another 2-power creature in the one-slot. Goblin Guide is one of the best aggressive creatures I've ever seen. The amount of damage dealt by a turn-one Goblin Guide usually puts people in a awkward spot where they need to play around lethal burn, but also need to prevent you from setting up a lethal board presence.

Goblin Bushwhacker: Normally this beater is for decks that can Ranger of Eos a copy from their deck along with something like Wild Nacatl. Here it serves as an early-game damage boost or a late-game combo-enabling bomb.

Blightning: Two for one, check. Three damage to the face, check. If I could play 12 of this card I would never play anything except for black-red decks.

Sign in Blood: Drawing two cards for two mana is a sweet deal. The damage dealt to us can actually be beneficial a lot of the time.

The sideboard provides the deck with a strong plan B. In testing the games originally seemed to be one-sided, in our favor, with Ad Nauseam essentially working as an "I win" card. As testing progressed, though, my opponents, Chris Lachmann and Stephen Miggels started leaving back chump-blockers when I got up to Ad Nauseam mana. Chris and Steve are both exceptionally strong players, but I did not want the deck to lose matches simply because my opponent knew how to play against me. This brought me to the transformative sideboard plan. With this sideboard we can take the combo out of our deck and become a dedicated aggressive deck without the Ad Nauseam plan. This leaves our opponents playing a guessing game. If we chose to side out our combo and they stop attacking with their team when we get to five lands, then we have more time to draw game-winning burn.

There was a lot of talk in the forums last week regarding the price of the decks in the column. None of those decks were particularly expensive, but a lot of readers complained that I spent too much time on the "building" and not enough time on a "budget." I would like to reestablish my goal as the writer of this column. I want to build or showcase exciting decks that can be built without having access to chase cards. Define a lot? Well, I do not want to limit this column to a certain number of tickets on Magic Online or certain number of rares/uncommons as past authors have. I observe the budget aspect of the column by building decks around cards that have been overlooked and are, therefore, undervalued. I do my best to shave off hard-to-get cards that may not be necessary to a deck, but I don't want to give readers watered-down versions of decks that cannot compete with their friends who may not be on budgets. I want to build budget-friendly decks that have the ability to compete with top tournament decks.

That being said, I have tallied up the number of Magic Online tickets the rares in this deck were trading for as of this writing. Leave a forum comment or shoot me an email if you like this feature and would like to see it as a regular part of the column.

I have played a lot of games with this deck over the past few weeks. I would like to share some of the games I have played with the latest version of the deck, the one shown above. 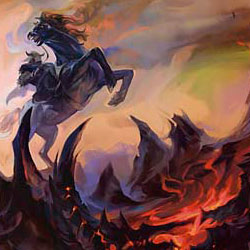 On his turn, my opponent played a Raging Ravine. I drew another Goblin Guide, played a land, cast my Goblin Guide, and attacked with both Guides (my opponent revealed a Bloodbraid Elf). My opponent cast a Lightning Bolt on one of the Goblin Guides and went to 5, then drew for his turn, played Verdant Catacombs fetching a land and going to 4, and cast a Bloodbraid Elf that flipped into a Sprouting Thrinax. He attacked for 3 and passed. I drew another land, played it, and passed the turn. My opponent played another Bloodbraid Elf and flipped into a Putrid Leech. He attacked with both Elves and attempted to pass the turn, but I cast Ad Nauseam and found enough burn to finish my opponent off. 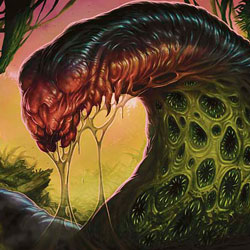 My opponent played a Verdant Catacombs, sacrificed it for a Swamp and went to 9. He cast Bloodbraid Elf, flipped into another Putrid Leech, and passed the turn. I drew a Lightning Bolt, used the unearth on my Hellspark Elemental, and attacked with my team. My opponent blocked Vampire Lacerator with Bloodbraid Elf and Goblin Deathraiders with Putrid Leech. He went for the pump, and I cast Lightning Bolt on the Leech in response. He took 6 from the attack and 2 from his Leech and sat at a precarious life total of 1. (Trample damage, such as from Hellspark Elemental, can be assigned entirely to a player if the creatures blocking are not on the battlefield when damage is assigned.) He drew for his turn and cast Garruk Wildspeaker, made a token, and passed. I drew a Searing Blaze and finished him off. 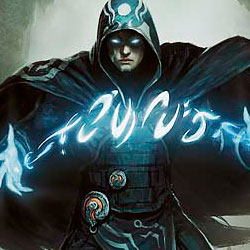 I side in the Deathmark because Baneslayer Angels and/or Kor Firewalkers are certainly coming in from the white-blue deck's sideboard. 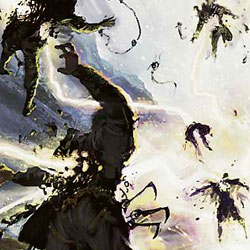 This deck is truly incredible. I would like to give Angelo credit for coming up with such a great idea, and I strongly recommend that everyone try this deck out.