winds of change bring the seeds of Magic. Once again, the Wizards website has been reborn.

My series of Building on a Budget articles has been imported from the old Magic Online site. It deals with the more casual side of the competitive spectrum, and is a great aid to players who want to play and win, yet do not want to spend a large amount on single cards to build their decks. While these decks are not the cutting edge and will not win every tournament, they are decks that have mild success and are a lot of fun to play.

The series is geared towards Magic Online players, and the deck prices reflect how much the decks would typically cost if purchased with online event tickets. I try to make sure all of the decks are under the cost of 30 Online Event Tickets to build, if you were to take 30 tickets and go into the trading room and trade tickets for the deck*. Some of the decks may have a lot of rares in them, but if this is the case they are probably inexpensive rares to acquire.

Even though this series is for the online players, many people have emailed me with their off-line paper copies of the decks. They often make for good Friday Night Magic decks and Multiplayer decks…I have written a lot about tribal decks. So all of you casual and FNM players out there keep an eye out - you never know when your next big idea might be sparked from one of these decks! 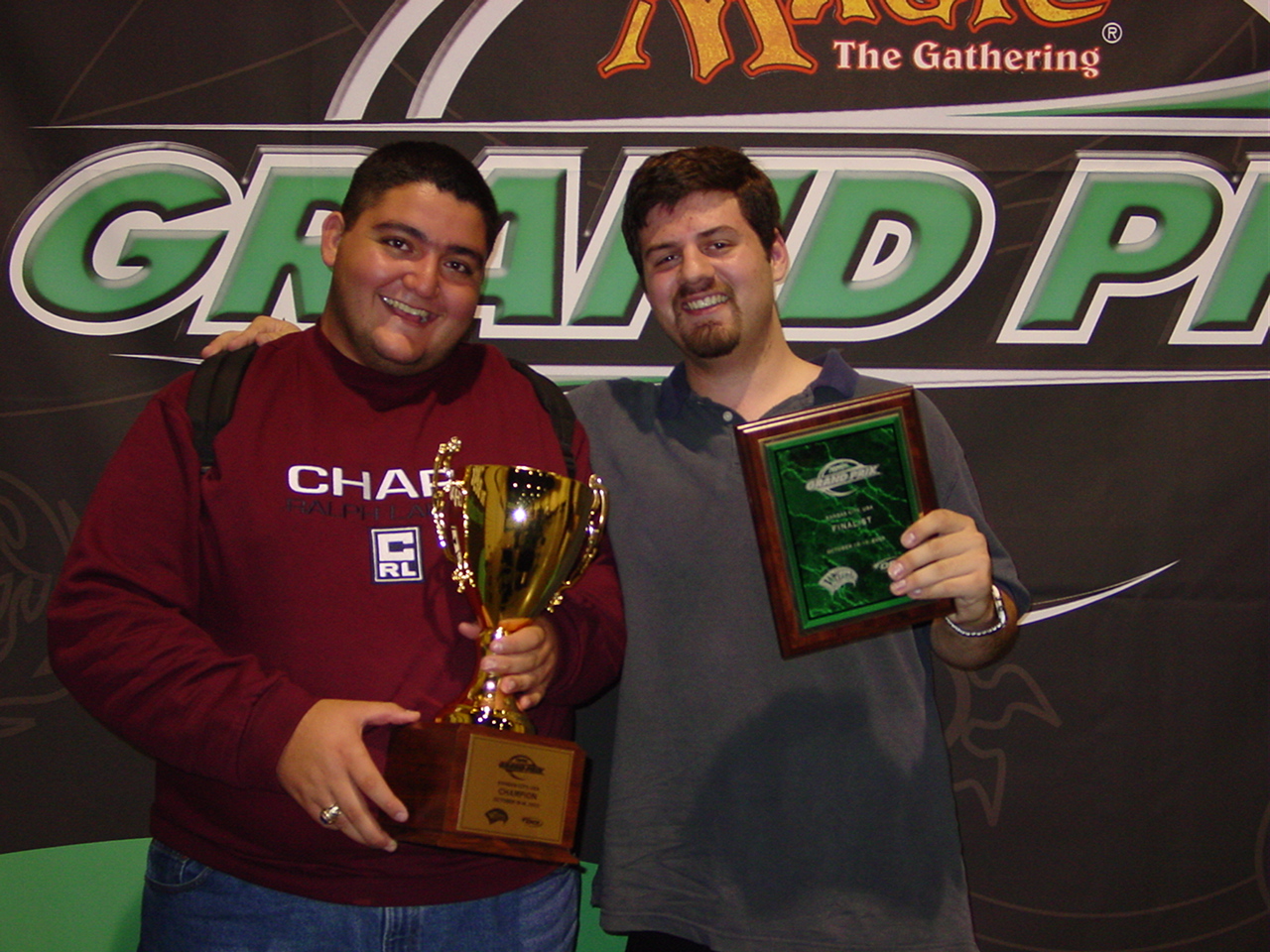 Nate and Antonio De Rosa, GP Kansas City 2003Before I delve into things I would like to say a few words about myself so you know who I am. Many of you will recognize my name from the multitude of other sites and magazines I have written for, and a few of you might even recognize it from my tournament finishes. Granted, I don't have the best success as a Pro Magic player, but my best finishes are probably 2nd place in Grand Prix Kansas last year and 13th place in PT Rome back when people were still reading The Dojo for their content. I'm a longstanding member of Team CMU – the same people who brought you Randy Buehler and Aaron Forsythe, which you will recognize from this very site as Wizards employees who were hired away from the team at some point. Aaron's articles will actually be appearing right next to mine in the Friday slots here on the new site.

At any rate – I am known for my spectacular rogue deck building skills. Not to say that the decks all perform spectacularly, but they all tend to attempt quite spectacular tasks. The deck I am going to talk about today is one of them.

The title of this week's column is not only to denote the life of the new website but also the deck I am going to discuss – Life. While I am not the creator of this deck, I have decided to take a crack at “budgetizing” the deck for our purposes.

…that is when you sacrifice him to the Sanctum to can two trillion and one life.

Yes, the combo won't kill your opponent, but it might make them concede. You see, while two trillion life is a rather small number in the grand scheme of the cosmos, it certainly is a lot of life to take away in a game of Magic. No non-combo deck can deal that much damage, and if they could, maybe you should gain ten trillion instead. Really, it is up to you.

The question that you have to ask yourself while playing this deck is: What do I do when I don't get my three card combo? The rest of the deck operates much like a regular Cleric deck, with the main issue being how to make a Cleric deck good.

This deck has three other cool things going for it besides the infinite life combo. The first of which is the Scion of Darkness and Dark Supplicants. While normally using your Dark Supplicant to sacrifice three Clerics and searching up the Scion is not great, when you have a Lightning Greaves it can actually be quite devastating. The turn 3 surprise Scion attack can be enough to put many decks under pressure.

The next cool part about the deck is the Weathered Wayfarer. While I was hesitant to add this rare to the deck, since it ups the total cost, I thought it was worthwhile because it helps you get your combo piece (Starlit Sanctum) and can get you cards by fetching up cycling lands and then cycling them away. It also helps fix your mana a little, while giving you an extra body to sacrifice to the Dark Supplicant.

The last cool part about the deck is the Rotlung Reanimator. This card is absolutely fantastic with clerics, especially when you sacrifice three to the Dark Supplicant. You will often upgrade your 1/1's into 2/2's. He also makes you much more resilient to Wrath of God. While you don't absolutely need the Rotlungs to make the deck work, I would try to get them – be wary, they are undoubtedly the most expensive part of the deck, making up about two thirds of the cost.

Your only real removal spell is Cruel Revival – so use them wisely! You don't want to burn them all and then find yourself starting down a Platinum Angel…when you have infinite life and they have an unkillable Platinum Angel….well lets just say you went to the bathroom before the match began.

Tips on playing the Deck

Adding Money to the Deck

One rare that I was really tempted to put in the deck was Murderous Betrayal. Not only does it solve the problem of not having enough creature kill, but how often can you say that you payed a trillion life to kill a Skirk Prospector? I mean – he was just too threatening! You might want to try adding more expensive creature kill effects like Akroma's Vengeance or Wrath of God, but it really isn't that needed.

The thing that this deck really wants is a good card versus the control decks – you might want to have Decrees of Justice or Eternal Dragons to make control matchups a bit better. While you can gain infinite life – they are happy to deck you with Mindslaver (it will get around your Grotto plan). So make sure you try and kill them before it comes to that…you will have plenty of time to break through if you save your Wretches for their Dragons.

If you add Glowriders to the deck, you can play for the shortgame and try to beatdown – if you sideboard in 4 Cabal Interrogators to go along with your 4 Headhunters, you will find that the control decks may struggle to stop your beats, especially if you have these guys backed by a Rotlung Reanimator.

Overall, this deck gives me a warm and fuzzy feeling inside, and I think it will do the same for you the first time you gain infinite life and then attack with a Scion of Darkness the very next turn.

Until next time, tap to prevent 1.

*Note that sometimes this series of articles actually makes the cards in them go up in price, so please don't hurt me if the deck costs a little more than 30 tickets after a few days.