he Magic 2013 core set is going to be on the shelves of your local game shop in less than three weeks. Many powerful cards have already been announced. I can't begin to explain how excited I am for Thundermaw Hellkite; there are few things I love more than five-mana bomby flyers. This week, I'm going to introduce another exciting card from M13.

Playing Standard these days can be pretty volatile. There are games where your opponent has multiple copies of Delver of Secrets that manage to flip in the first few turns. Many strategies, like White Weenie, are simply unequipped to deal with a flying onslaught of 3/2s. Traditional white aggro decks will be unable to race the Delver menace without something that can reliably trade with Delver of Secrets. How can a creature match up well against Delver of Secrets at only one mana?

War Falcon is a 2/1 flier for one mana. This fact alone is going to be enough to turn some heads. Not too long ago, Savannah Lions was a tournament staple in every Constructed format. Here's a card that's significantly better than Savannah Lions if you have a Soldier on the battlefield.

It's a big drawback but, depending on what Knights and Soldiers get printed, this could be doable. If it is, then this is going to be the real deal. You're going to want at least twenty cards that make Soldiers or Knights or are, in fact, Soldiers or Knights themselves. That's a pretty big hurdle for a deck builder, but most of the better white creatures and token producers have the Soldier subtype attached to them. It's definitely going to be doable, but it's going to require a commitment. 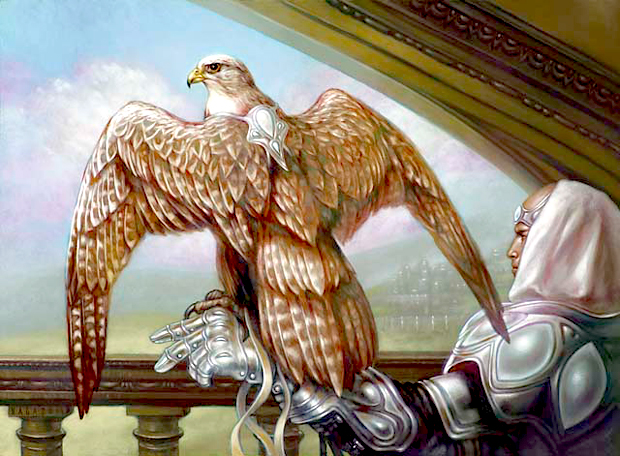 In Modern, War Falcon has an excellent friend who goes by the name of Antoine Ruel. Ranger of Eos, Antoine's invitational card, can search up two copies of War Falcon and halt any Delver of Secrets aggression that might be coming from your opponent. Ranger of Eos is a Soldier, which gives it a huge amount of synergy with War Falcon. For four mana you get a 3/2, and you get two copies of a 2/1 flier for one mana that already has its conditional requirements fulfilled.

I expect War Falcon to see a good amount of play when it's first released, at least in sideboards. We'll have to wait and see what Soldiers and Knights get printed to know how powerful this is going to be in the new Standard.

Last week, I said I was planning on playing in my first PTQ in over a year. Since then, I've received well over fifty emails asking for a quick tournament report.

Last Saturday, I cleared my schedule and was pleasantly surprised that there was a PTQ taking place less than a half-hour drive from my apartment.

I intended on playing the Sorin's Vengeance deck I wrote about last week. I played many games with the deck on Magic Online and found myself doing okay. I was winning a lot of matches, but I often found myself floundering in games where I didn't draw the right cards in the correct order. 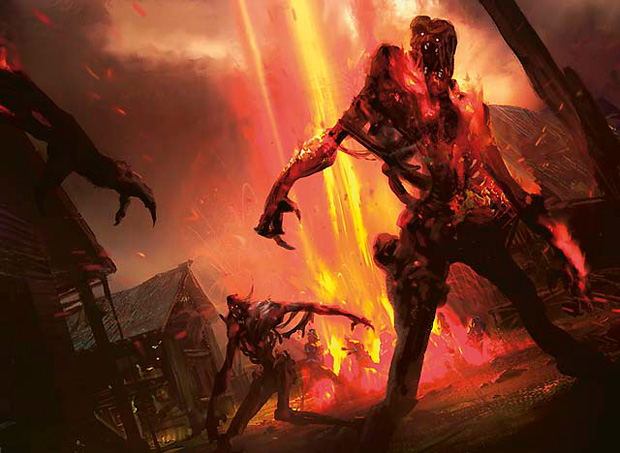 I saw Martin Juza's deck from Grand Prix Manila and it was love at first sight. I've been telling all my friends to play four Bonfire of the Damned for weeks and I felt like I needed to follow my own advice. I put together Juza's list on Magic Online and played a few matches.

I love the style of play the deck presented. It might be a pile of creatures and four Bonfire of the Damned, but there's a surprising amount of interaction and it's very important that you recognize when you should be advancing your board-state with another creature and when you should be activating Gavony Township. I like attacking before I cast any spells so I can get a clear picture of the correct line.

After a few matches, I decided that the mana base was a little off. I tried cutting a Mountain for a Forest, but I was still having trouble when I wanted to cast Strangleroot Geist. Strangleroot Geist is incredibly difficult on the deck's mana and you never want to be naming something other than Angel or Human with your Cavern of Souls. Eventually, I decided to cut one Strangleroot Geist for another forest. This gave my deck thirteen green sources of mana that came into play untapped. I felt much more comfortable going into the PTQ with these numbers.

I was a bit confused with Juza's sideboard, so I decided to remake the sideboard so I would have a more solid understanding of what I should be bringing in and out in particular matchups. Here's the final seventy-five I played:

The deck was awesome and I'd recommend it to anyone who wants to play in a PTQ or other large Standard event this coming weekend. I went undefeated in the Swiss, drawing the last two rounds to secure a spot in the Top 8. I made some play mistakes in the quarterfinals and lost a match I probably should have won. I'm confident the deck is well-positioned for the coming week if you're interested in playing something like this.

My time writing Building on a Budget is coming to an end. I've written this column for the better part of the last four years. In that time, I've done my best to bring exciting new decks to my readers every week. I learned a lot about deck building in my time as the Building on a Budget author, and I hope you have too.

I'd like to thank Wizards of the Coast for giving me such an incredible opportunity to do what I love. More than anything, I'd like to thank my readers, who have provided me with an endless torrent of ideas for exciting new decks.

Next week, I'll begin working on a new column focused on the evolving metagame of Magic Online. I won't stop brewing new decks and I'll do my best to make my latest brews available to the Magic public.

The Magic 2013 Prerelease is less than two weeks away. Make sure you reserve a spot at your local gaming shop so you get to be one of the first to play with exciting new cards like War Falcon. Who knows? Maybe you'll be one of the very first to cast Thundermaw Hellkite and send it into the red zone!

Hello and welcome back to another edition of Building on a Budget. I've been working on a new deck for Standard over the past two weeks and I'm excited to share it with you guys today! I...