ello, and welcome to another edition of Building on a Budget. A few weeks ago I got really excited when I clicked on the Daily Deck and saw that this monstrosity had Top 8ed a PTQ in Illinois: 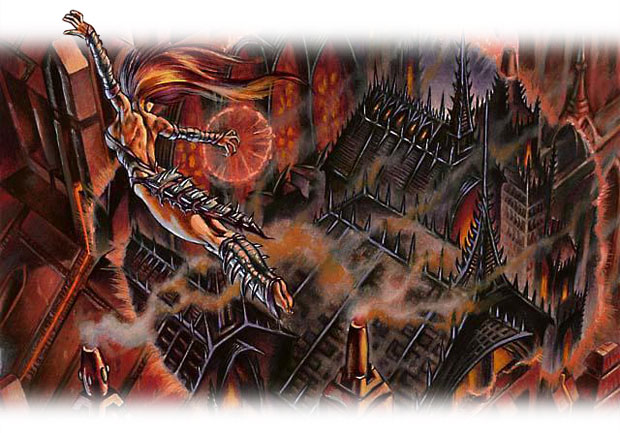 The deck list is beautiful. It wins most matchups handily by making favorable blocks and eventually drawing a Warp World. Crazy things start happening when you play your Warp World. The deck has the ability to play out its hand very quickly so when you play your eight mana sorcery you usually have a lot more permanents in play than your opponent. You get a lot of crazy new boards with your Warp World, and a lot of the time you draw into another Warp World off your Mulldrifters or you're able to return the one you just cast to your hand with a Nucklavee. Every time you cast Warp World, you generally end up with a better board position, while your opponent ends up in a worse position. The deck plays 56 permanent cards, it's very hard for another deck to challenge the potency of our own flips off the Warp.

I'd like to change some of the card choices and see how the deck plays.

Birds of Paradise doesn't seem like it does as much as one might hope. Farhaven Elf provides two permanents, and if things start to look hairy we can chump-block with the free body.

Hellkite Overlord and Broodmate Dragon are incredibly strong cards. The biggest problem I see here is that I want to keep this deck as inexpensive as I possibly can. While Chris's choices may have been stronger, I decided to change the win conditions to make the deck more affordable. If you own a Broodmate Dragon or Hellkite Overlord, then feel free to put it in the deck.

Once I incorporate all the changes I've settled on, the deck looks like this.

I'll explain each of the card choices before I battle a few times in the casual room.

Farhaven Elf: I like Farhaven a lot in this deck. I want to make myself very clear when I say that I didn't "budgetize" the Birds of Paradise. I think Farhaven Elf is a better fit for this deck given what people are playing. I'm not saying Chris' choice was wrong; I can almost gaurantee he understands this deck far better than I ever will. If all your friends are playing Faeries, you need to get new friends. Eh, I mean .... You probably want to be playing Birds of Paradise to accelerate into effective threats during the early stages of the game.

Woodfall Primus: I think Woodfall Primus is a great fatty boom boom for a deck like this. It accomplishes much of the same thing that Broodmate Dragon did in Chris' original list. It may not provide a pair of permanents, but it destroys one of your opponent's permanents on the way in, which affects the permanent count in a very similar way when it comes time to cast Warp World.

Keeper of Progenitus: I've wanted to play with this for so long. It costs less than 0.1 tickets on Magic Online, and its effect on games with this deck is pretty unbelievable. Flipping into a Keeper of Progenitus when you cast your Warp World is usually game. You have what seems to be unlimited mana, and you can abuse it much better than any deck that currently exist.

Mulldrifter: My love for this card cannot be overstated. Drawing extra cards is probably one of my top five favorite things in the world. You don't always naturally draw a Warp World, Mulldrifter helps ensure that the deck actually finds its big sorcery.

Elvish Visionary: It's like a mini Mulldrifter. I never think of Elvish Visionary when I first start brewing up a new deck, but somehow it finds its way into a lot of my lists. I was really excited to see that Chris was playing with this card and in testing I've found it to be a really important tool.

Nucklavee: To be honest, I've been underwhelmed with Nucklavee in the testing I've done. I decided to keep it in because I wanted to illustrate how this concept works as a combo deck. Nucklavee can only return Warp World. It may seem narrow, and that's because it is very narrow. I'm sure there's a better fit here or a way to better abuse Mr. Nucks.

Siege-Gang Commander: This is the most expensive card in the deck other than Warp World. I don't think we have much of a choice here, though. The Commander gives us four permanents and creates a board presence that is extremely difficult for most people to deal with. I found myself winning a lot of games by simply casting a fourth turn Siege-Gang and bashing through while my opponent was trying to deal with my other threats.

Fertile Ground and Trace of Abundance: These help accelerate us into Warp World and fix our mana so we can cast awkward things like Mulldrifter. I had to cut one of these to make room for a singleton Island with the addition of Farhaven Elf. Initially I was tempted to cut a Fertile ground, but further testing showed me that casting Trace of Abundance can be difficult a decent portion of the time.

One of my favorite aspects of this deck is its ability to complete transform itself into an aggressive red-green deck after sideboarding. I like Chris's Bloodbraid Elf plan, and I think most sideboards should start with a playset of Bloodbraids. The rest of the sideboard seems like it's very up in the air. Kitchen Finks is a solid four-of, and I would reccomend playing a full four of those in your sideboard also.

I took this deck in the casual room to play a few games. 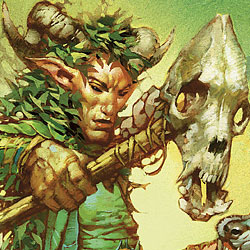 I keep Forest, Forest, Fertile Ground, Farhaven Elf, Siege-Gang Commander, Murderous Redcap, and Mulldrifter on the draw. My opponent plays a Flamekin Harbinger on turn one, finding a Rage Forger. I draw a Mountain, play it, and pass the turn back to my opponent. My opponent attacks for 1 and plays Elvish Visionary. I draw Trace of Abundance, play Fertile Ground, and pass the turn. My opponent plays a Rage Forger and attacks me for 6 damage. I draw a Warp World, I play my Murderous Redcap destroying his Rage Forger and pass the turn. My opponent attacks with both creatures, and I block the 2/2 Elvish Visionary, get my Redcap back, and shoot my opponent for 1 damage. He then plays Leaf-Crowned Elder and passes the turn. I draw a Forest and play my Trace of Abundance and Farhaven Elf. My opponent misses with the Elder's kinship trigger and attacks me for 5. I double block the Flamekin Harbinger and take 3. He plays a Wolf-Skull Shaman and passes. I draw another Trace of Abundance, cast it, and cast my Siege-Gang Commander. My opponent hits another Wolf-Skull Shaman off Kinship and puts it onto the battlefield alongside a 2/2 Wolf. He thinks for a moment and passes. 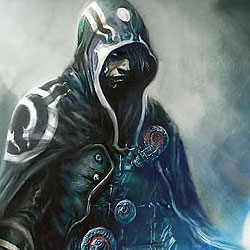 I keep Mountain, Forest, Fertile Ground, Farhaven Elf, Farhaven Elf, Mulldrifter, and Woodfall Primus on the play. I start out with two Forests into Fertile Ground, and my opponent starts with two Vivid lands in a row. I draw a Warp World, cast my Farhaven Elf, and pass the turn. My opponent casts a Jace Beleren and draws an extra card. I draw a Mountain, cast my Mulldrifter, drawing a Mulldrifter and a Warp World, and pass. My opponent draws another card off his Jace and casts a Garruk and untaps two lands he then casts Pyroclasm. I draw a Siege-Gang Commander and cast it. My opponent plays another Pyroclasm and makes a 3/3. I draw another Siege-Gang Commander and cast it. My opponent attacks with his 3/3 and I block. He then casts Wrath of God. After the Wrath of God resolves, he makes another 3/3. I draw a land and cast the other Mulldrifter I drew off the first. My opponent casts Elspeth, Knight-Errant, makes a 1/1 and untaps two lands after attacking me for three. I draw a land and play Warp World. I flip into Keeper of Progenitus, Woodfall Primus, Siege-Gang Commander, Farhaven Elf, Fertile Ground, Trace of Abundance, and three lands. I attach the Auras and cast my other Warp World, flipping into two Mulldrifters, two Murderous Redcap, a Keeper of Progenitus, a Nucklavee, and a ton of land and Auras. I return a Warp World to my hand with Nucklavee and cast it again. This goes on for a bit before my opponent has nothing but one land and I have an overwhelming board. My opponent concedes and asks for the deck list. 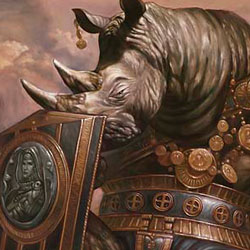 Green-White Tokens seems like it's a really rough matchup. Even if I cast my Warp World, I might still lose because they create a really strong board presence and can outnumber my permanents. In the early game I can't chump as well because all their guys don't really die to my chump-blockers, and they have Overrun as a trump card in the late game. Against most other popular decks, this seems like it's really strong now. Against Faeries it's very easy to create a transformational sideboard that they'll have a lot of difficulty beating.

I hope you've all enjoyed this week's article. I'd like to thank Chris Boomer for his awesome new tech.