Wrecking with Rakdos (Part 1 of 3)

to Rakdos week here at magicthegathering.com! This week, I'll be kicking off the Rakdos Bloodsport Dissension Theme Deck evolution, and continuing it two weeks and three weeks from now.

Many of you were expecting part two of my Sasaya column, but that will be coming next week. Why? Because I want to incorporate your suggestions! You see, my column is published on a Monday, but my deadlines for getting Building on a Budget to Ted are not too long after that. This usually does not give me as much time as I'd like to incorporate reader suggestions into deck evolutions.

To rectify this problem, I'm experimenting with trying out a new format:

I'll alternate decks that are being tinkered with, giving me time to use reader suggestions, e-mail suggestions, suggestions made on the boards, and suggestions made by polls. Now, this format might not work out – I am already a little wary about breaking up the flow of one particular deck by wedging another deck in-between it – but in the worst-case scenario, this will only happen once – with the Sasaya and Rakdos decks. At best, this format will give you, the reader, the greatest amount of input into this column.

Here's what Wizards of the Coast has to say about the Rakdos Bloodsport deck: 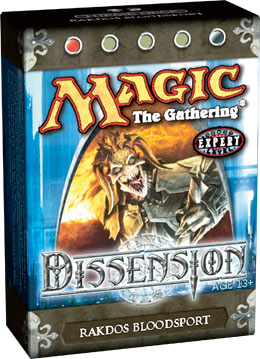 “The Cult of Rakdos is the most dangerous and reckless guild in all of Ravnica. With the “Rakdos Bloodsport” deck, you'll need to adopt some of that mentality yourself. The guild's mechanic—hellbent—rewards you for having no cards in your hand, a behavior that makes “careful” players cringe. But you must trust in the minions of Rakdos, throwing caution to the wind!

You'll empty your hand the way you would with any other deck—by playing all your spells. You can dump plenty of one- and two-mana creatures on the table in the first few turns. Rakdos Signet will help you play your expensive spells quickly. Normally, you'd save your removal spells, such as Cackling Flames, for choice targets. With this deck, play them quickly just to keep your hand empty. Seal of Fire is doubly good. You can play it immediately, but you don't have to use it until the time is right.

If you have trouble getting rid of the last few land cards in your hand, Drekavac, Rakdos Guildmage, and Nihilistic Glee all give you ways to discard for fun and profit. Ignorant Bliss is a neat trick. It allows you to become hellbent at a moment's notice without permanently losing any cards.

Once your hand is empty, the fun really begins. Your 2/2 Gobhobbler Rats become vicious 3/2 regenerators. The flying Demon's Jesters become 4-power mega-threats. Slithering Shade wakes up and can go on the offensive. If your horde was wreaking havoc before they went hellbent, they'll be unstoppable afterward.

Of course, having no cards in your hand doesn't mean having no options. Several cards in the deck let you recoup cards as the game goes on, including Lyzolda, the Blood Witch; Ragamuffyn; and Nihilistic Glee. Each one packs a hefty cost, but that's part of dealing with a guild populated by demons and devils!

When you're ready to modify the deck, other Rakdos cards in the Dissension set are the first place to look. There you'll find many hellbent goodies, from the high-risk, high-reward Jagged Poppet to the devastating Rakdos Pit Dragon. The set also has several cards that help you empty your hand and keep it empty, such as Skullmead Cauldron and Delirium Skeins. Bring the hurt!”

Did I empty my hand, hence ensuing fun? Let's see!

Online Alter Ego dropped a couple of early creatures, including Mourning Thrull and Hand of Cruelty, and followed them up with Loxodon Warhammer. I kill all of his guys, either through spells or by trading in combat, but he drops a pair of Icy Manipulators.

Note to myself: This deck can't deal with non-creature artifacts.

The Icy Manipulators hole me up, and I end up having to try to win with Nihilistic Glee against Stinkweed Imps. Eventually, Online Alter Ego drops an over-twenty-power Mortivore, and I scoop.

Note to myself: This deck has a tough time dealing with regenerators, especially those with a toughness over two.

I get a first turn Scorched Rusalka, slap Taste of Mayhem on it, and cast Ignorant Bliss on turn 3. This enables me to swing for three on turn 2, five on turn 3, and three on turn 4. I cast Demonic Jester on turn 5, but lose the Rusalka to creature removal. On turn 6, I drop my hand (land, Seal of Fire, and Rakdos Guildmage), swing for four, and earn a concession.

Note to myself: If my opponent gets a slow start, this deck has the capability to run them over quickly.

He gets stuck at two lands, so I help out his mana problems with a Wrecking Ball. Unfortunately, my only offense is a Torpid Moloch (which is truly bad). Joemyuh gets back up to two lands before I get more creatures - Sadistic Augermage and Scorched Rusalka. The Augermage gets a Taste of Mayhem, I throw Cackling Flames at Joemyuh, drop Seal of Fire, sacrifice three of my four lands (leaving me a Mountain and a Rakdos Signet) to allow the Moloch to attack, and hit Joemyuh from twenty to four in one attack. He concedes, as I have Seal of Fire and Scorched Rusalka on the board, and he has no answers.

Note to myself: Not only can this deck win fast, but thanks to Hellbent, it can have one really fun, explosive turn in which it essentially locks down the game! Thank you truth in advertising!

I drop Drekavac on turn 2, follow it with Lyzolda, and trump his Selesnya Guildmage by dropping Gobhobbler Rats on turn 4, and throwing them at the Guildmage via Lyzolda.

Unrelenting drops Honden of Cleansing Fire, but I drop Sadistic Augermage, and continue to beat down for nine a turn. Galvanic Arc takes Drekavac off the board (though I sacrifice it to Lyzolda to draw a card in response to the Arc), but my six damage a turn outrace his two lifegain, especially given that I had a jump early.

Note to myself: Drekavac makes for a fast clock.

I wasn't quite sure what Wildiastate was trying to accomplish with this deck, but he cast half a dozen Signets, Natural Spring, Genju of the Fens, and Underworld Dreams (with only one Swamp in play) over the course of the game. This wasn't a match for Drekavac, Scorched Rusalka, and Rakdos Guildmage, backed by Seal of Fire. Even drawing Torpid Moloch (so bad!) did nothing to slow down my win.

There are three main routes to victory running through the Rakdos Bloodsport theme deck. They are Hellbent, burn, and weenie creatures.

Hellbent: This encompasses not only cards that have the Hellbent mechanic, but other cards which enable it – such as Ignorant Bliss. The Hellbent strategy is to unload your hand, which in turn powers up many of your other spells.

Burn: Seal of Fire and Cackling Flames are the main burn components of this deck, but both Red and Black are known for direct damage (Black moreso for Consume Spirit-type effects), so an effective Rakdos burn deck is entirely possible.

Weenie Creatures: Scorched Rusalka and Drekavac beat down quite often, and Lyzolda was good the times I drew her. Should the main focus of the deck be efficient creatures designed to run over your opponent?

Some of these strategies might bleed over a little bit. For instance, Seal of Fire is great in a Hellbent deck, because it can sit on the table while you empty your hand, waiting for later use. Drekavac is a good creature in both a Hellbent and a weenie build, and Scorched Rusalka works well as both a burn and weenie creature. There's even the rare creature like Lyzolda, which works in all three builds of the deck!

Before you leap to any one decision, let me speak a bit about the advantages and drawbacks of each build. Remember, there are no perfect decks – otherwise, everyone would play the same deck, and Magic would be awfully boring! There are strategies that have strengths and weaknesses, and your goal as a deckbuilder is to maximize strengths while minimizing weaknesses.

Disadvantages: Difficulty reacting to an opponent's plan, due to lack of cards in hand. Lack of options. Weakness to bounce effects (which shuts off Hellbent). 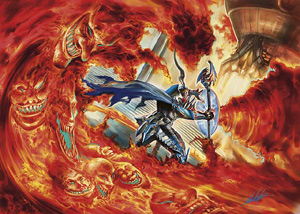 Advantages: Win condition doubles as board control. Virtually immune to board control effects (what good is Minister of Impediments against Blaze and Cackling Flames?) Able to remove large chunks of life all at once.

Disadvantages: Can run out of gas. Creatures deal damage every turn, spells (usually) only once. Can be mana-intensive to get going (Blaze, Consume Spirit). Vulnerable to damage prevention effects and countermagic.

Advantages: Ends games extremely quickly. Able to take advantage of an opponent who is short on mana. Able to dominate the board.

Disadvantages: Vulnerable to board control. Spells become less effective as the game goes on. Can run out of gas.

The decision on which way I take the deck is up to you! In next week's article, I'll be adjusting the Sasaya deck to incorporate several changes suggested in the forums (including a Spiritcraft-intensive build and a non-Red/Green build), and then in two weeks, I'll be back with one of three articles: Rakdos Hellbent!, Rakdos Burn! Or Rakdos Weenie Rush!