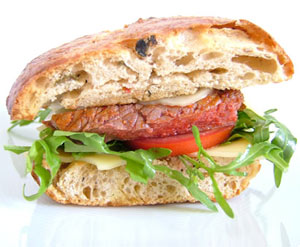 got the idea for today's article while bumping through an old folder on my computer that contained sketches and old versions of Magic art from a while back. It was when I noticed how certain illustration evolved that I thought it might be cool to show this evolution over the entire creative process of a Magic card. Depending on how it is received, there may be more installments of Building a Magic Sandwich in the future.'

Why “Magic Sandwich?” The answer is not terribly sexy - it's a thing that has lots of parts that make up a whole and, you guessed it, it also has flavor. We're going to kick off Building a Magic Sandwich with a card that I illustrated, Goblin Flectomancer. It's the particular file I found on my computer that gave me this idea in the first place. Actually, it was multiple Flectomancer files that I found, and that's what gave me the idea. Anyway, enough with the intro, let's get to the meat!

All sandwiches have bread, or some bread-like food item into which the tastier goodies are mashed. The bread of a Magic sandwich is the card mechanic. It determines what sort of good stuff can be piled on. You can't put sloppy joe on warm white bread – it'll flop all over the place. Similarly, you can't just jam any sort of flavor onto any random card mechanic. The importance of the choice of bread will become more evident as we construct the Flectomancer Sandwich.

The bread that we began with was this:

Mirrored Jewel Goblin
1(ur) (ur)
Creature
3/2
Whenever a player plays an instant or sorcery spell, you may sacrifice CARDNAME. If you do, put a copy of that spell onto the stack. You may choose new targets for the copy.

This is not to say that Design did not run through a bunch of different loaves before they cut a couple slices like this. We are not concerned with that because Taste The Magic is about what happens once the chefs take over (that's a carelessly overdone metaphor for peeps on the Creative Team). Anyway, this is what we were handed way back at the beginning.

A Slice of Pimiento Loaf

The first thing that happens to the sandwich is the addition of a defining flavor like meat, a tangy sauce, or something strong like eggplant. In this case, it was something standard, a lunch meat, but not your standard bologna or ham.

[Goblin Furcomancer]
1(ur) (ur)
Creature – Goblin Wizard
3/2
Whenever a player plays an instant or sorcery spell, you may sacrifice CARDNAME. If you do, put a copy of that spell onto the stack. You may choose new targets for the copy.

Show a goblin wizard poseur in over-the-top wizard garb. He's wearing a strange helmet that looks like it has a large tuning fork atop it. This little wizard wannabe is the apprentice to a real Izzet mage, but the mage will eventually just channel a powerful spell through the goblin, likely killing him in the process.

Goblins are standard fare, but crazy wizard goblin is a little more spicy! The sandwich had been given direction. It was to be a kooky Izzet wannabe mage, complete with giant tuning fork contraption on his head. It was not to be the same old turkey and swiss on rye. Now we had to come up with some other flavors to complement the meat and the bread- perhaps some cheese or condiments!

The First Bite You Take Is With Your Eyes

A great chef knows that food that looks delicious is more likely to please the consumer than an ugly morel mushroom. A pizza with green peppers, black olives and pepperoni looks more inviting than an onion and cheese pizza because it's not all yellow - it has bright color and contrast of lights and darks as well. We believe the same is true of a Magic card. Art that is a dud will immediately damage the perception of a card even before it is explored in gameplay. So here's what was added to bring out the flavor of the sandwich, while adding a bit of visual zing of its own. 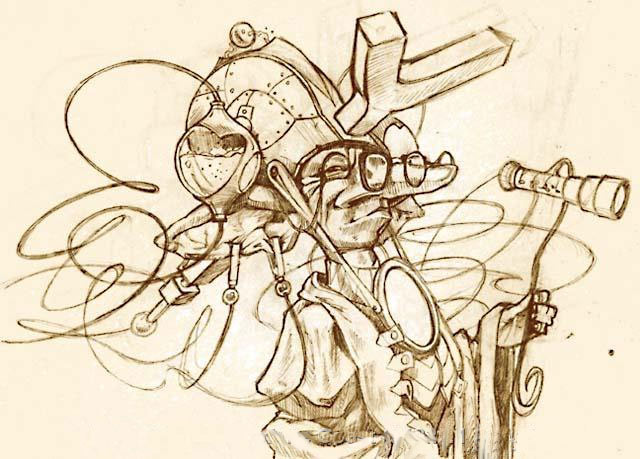 Ah, a crisp piece of lettuce was added for color and texture. There you can see the giant fork helmet (which helps him “fork” a spell) and the other over-the-top Izzet gizmos. The sandwich was coming together.

What Shall We Call This Menu Item?

At this point, writers get their first crack at adding to the sandwich. Names and flavor text are written throughout the entire card development process. Let's take a look at the first batch of names that were cooked up:

There were some interesting options in there. And there were some cornball submissions that were too zany even for the Izzet. At that point, I was not willing to supplant the placeholder name that I liked. “Furco-“ is a root word meaning “fork” and “-mancer” is a Magic catch-all word root for a wizard. Fork wizard seemed just right.

Scrap the sandwich, the Developers switched to pita bread! The card mechanic was changed mid-construction. Here's what they left us with:

[Goblin Furcomancer]
1(ur) (ur)
Creature – Goblin Wizard
3/2
Whenever a player plays an instant or sorcery spell, you may sacrifice CARDNAME. If you do, you may choose new targets for that spell

Well that was a wrench in the sandwich. Our “Fork” wizard had just become a “Deflection” wizard. The Creative Team chefs (mostly meaning me, at that point) scrambled around the kitchen to see what could be salvaged. The name was definitely a no-go. The concept and the art might be able to make it through with a few tweaks. All was not lost.

As it turned out, the art just needed a little massaging to end up working, and it brought the concept along with it. Pimiento Loaf was put in the pita with shredded lettuce. Here's how it shook out: 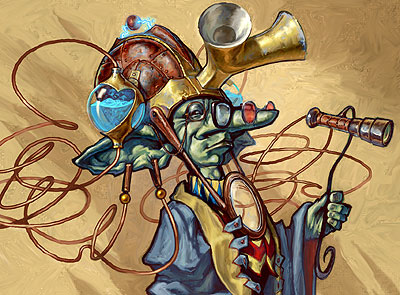 The tuning fork was changed into a mizzium rerouting tube. Also, the little mirror that I connected to the bottom of the helmet made an easy conceptual leap from a thing that mirrors or copes something to a mirror that deflects magic beams and such like it would a laser. Nifty, eh! The rest of the goblin remained the same.

What Shall We Call This Menu Item? Part II

Furcomancer would no longer work, so I went back to the writers to see what they'd come up with for our new, altered Izzet goblin. Here's what they produced:

Wow! That's a lot of fun, wacky stuff. All the gizmo and gadget stuff was right in line with the art and the Izzet guild. But I felt it too strongly suggested a mechanic that cared about artifacts. Strangely, nothing really took a swing at the whole “deflection” angle. I stared at the name “Goblin Furcomancer” and glazed over longingly. Then I broke out my word root dictionary and tried to find “deflect.” I bet you can guess what I found. Problem solved, and it was just a matter of changing 4 letters. Let's move on to the condiments; flavor text.

Some people do not like condiments on their sandwiches. I am one of them. I am not a fan of ketchup and I loathe mayonnaise. I'd rather run that ham sandwich sans goop. However, I do love the condiments on my Magic cards. Let's have a gander at the viscous verbage provided by our writers:

"He has a habit of attracting lightning. We call him Rod." - [Piuna], Izzet labmage

Rerouting magic through a goblin's brain is the surest way to throw it wildly off course.

“The boss says I'm Supra-Expendable! Whatever that is.” – Puldubbil, Izzet Goblin

"Of course I'm important! Master even gave me a title: 'test subject'!"

"Excuse me, 'Great Magus'? Hurry up and stir that vat of goo." - Tadat, Izzet mage

You don't want whatever message a goblin would bring you.

Rival Izzet often send each other traps. Some have been in circulation forever.

His "helmet" focuses latent energy for industrial applications. He thinks it makes him smarter.

This was an easy choice for me. There were some funny ones in there, but the concept as a whole seemed funny enough to me. Playing it straight seemed even more humorous. So I went with the one that makes you think a little rather than laugh a little.

Rerouting magic through a goblin's brain is the surest way to throw it wildly off course.

Putting it all Together

So now our pita is dripping with tasty contents. It's time to find one of those toothpicks with the shiny plastic fringe at the top and poke it through this bad boy. But wait! What's this? New Bread? Again!!! Okay, it was not a huge emergency, but the Developers decided to go from a wheat pita to a regular white one. In non-metaphorese, that means they switched from a

Being the attentive artist that I am, I considered what this change would do to the art as it relates to the card frame. As most of you know, hybrid mana demands a different card frame than regular mana. And this, my friends, affected the art. I envisioned my goblin as a red and blue garbed creature surrounded by a gold background. In a red and blue card frame, this would really frame up the goblin well. But in a gold frame, the background would bleed into the card frame and look monotonous. So I dove back into the art to try and brake it out if its golden cage. Color was added to the background so that the art would stand out in a gold frame: 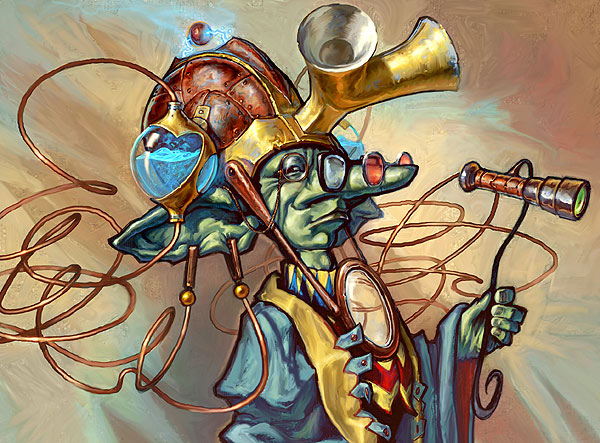 After a little tweak and a bit of salt and pepper, here is the sandwich that was made.

With the amount of cards that we make, and this much potential for flux in the process, it is a hectic, hectic job. If any of you have ever worked in the kitchen of a restaurant (and no, fast food does not count,) you'll know what I am talking about. People are scrambling about, juggling 40 meal orders and 40 bar orders and hot plates of ratatouille and stacks of dishes, dodging the pea soup spill and the really smelly dish washing kid. Sometimes, a sloppy joe on white bread might sneak out of the kitchen, but we really do try very hard tom make each and every Magic card a tasty winner.

Anyhoo, there it is. The first Building a Magic Sandwich. In the future, should more installments be in order, I promise to lay off of the sandwich metaphor. But for today, I dish it out without cutting off the crusts!