it be possible that even after the Champs-driven events of Too Many Archetypes! there are even more archetypes available in this fledgling Lorwyn Standard? Can it be possible that some or even most of them seem even better tuned to Standard domination?

Throw a couple of Pros into the Standard mix, and the answers to the above questions are probably yes and yes.

Despite taking both first and second positions last week (Elves and Black-Green Midrange), despite all five colors being present in the GP–Krakow Top 8, surprisingly, there was not a Gilt-Leaf Palace anywhere in the elimination rounds. So what decks were standing at the end of the Swiss?

Blue-White Pickles is a control deck that can either win by conventional means (some permission, a little board control, a tricky flash or two, bam bam), or by locking the game down with the Pickles combo, named for the archetype defining Brine Elemental. Brine Elemental locks down the opponent's ability to untap; Vesuvan Shapeshifter comes down face down, then will flip face up, copying Brine Elemental... every turn. The combination is in a sense "infinite," but it doesn't actually need to go on forever. Brine Elemental has 5 power, so games don't last very long for a paralyzed opponent once Pickles is in place.

Wrath of God – The biggest incentive to play white in Standard is, not surprisingly, present in Cheon's GP-winning list. In Time Spiral block, Pickles often had problems with swarms of creatures if the mana lock combo didn't show up quickly enough, prompting many to adopt another combo: Urborg, Tomb of Yawgmoth + Damnation (this was actually very surprising at one point). Cheon went with the original, main deck, and modified his mana base accordingly.

Oblivion Ring – A high quality card from Lorwyn, Oblivion Ring might be the best all around answer to planeswalkers in the present Standard. It can deal with anything from a fearsome Tarmogoyf to a lowly Fertile Ground as well, quickly and efficiently.

Aven Riftwatcher – One of the big advantages to playing white versus playing any other control options is the life gain. Aven Riftwatcher is one of the most mana-efficient life gain cards in Standard, a quick route to 4 life plus whatever the Bird Rebel Soldier soaked up with a chump block; it is cheaper than Tendrils of Corruption, less specific-land-reliant, and doesn't have the same frowny face up against a Greater Gargadon.

Jace Beleren – Look, Ma! I've got a planeswalker, too!

Featured at the end of last week's Swimming With Sharks, The Mannequin Deck is one of the exciting new archetypes to come out of Lorwyn. This one hit the Krakow Top 8 in the hands of former Road Warrior Olivier Ruel.

The Mannequin Deck is a persistent card advantage deck with almost unparalleled versatility. In the early game, it can play Shriekmaw for two mana or Mulldrifter for three. In the late game, they come down at retail value... Or come back from the graveyard at instant speed via Makeshift Mannequin.

The card advantage of The Mannequin Deck is almost irresistible, even for a control opponent, due to Grim Harvest. In a long game (at least assuming the opponent hasn't set up a main deck Extirpate) Grim Harvest can come back again and again, setting up more and more card advantage via evoke and its associated triggers, bringing threats, answers, and card drawing limited only by The Mannequin Deck's ability to hit land drops. In sideboarded games, Bottle Gnomes + Grim Harvest is reminiscent of the beatdown-trashing Corpse Dance combo.

Olivier's three Damnations are in the main; he played only one Grim Harvest.

Zatlkaj ran some mana acceleration via Mind Stone, absent from essentially every other build.

While he ran Draining Whelk, certainly a surprising defensive option, Matej did not play Mournwhelk. Mournwhelk, while ostensibly a clunky seven-drop, can prove relentless in a long game facing control. For four mana, it can evoke as an Unnerve—not typically good enough for Constructed tournament play—but almost irresistible with Grim Harvest in a long game.

Then again, Zatlkaj went from three to one to no copies of Grim Harvest at all!

This brand new deck is the latest in a long line of outstanding blue decks to be unleashed on the metagame by from the standing Resident Genius, Guillaume Wafo-Tapa.

At its essence, The Guile Deck is a straight blue control deck. When I say blue, I mean that it is blue. This isn't a compromised or hybridized deck with lots of colors and options, or even a two-color theme deck like Guillaume's first famous blue-red Niv-Mizzet, the Firemind brand. The Guile Deck is heavily blue with three different classes of

It's not like we need a lot of reminder text on this one, but Teferi, Mage of Zhalfir, the former planeswalker, is one of the most powerful threats in Standard. Teferi laughs off Greater Gargadon or almost any exquisitely crafted suspend-based strategy... Oh yeah, he also locks down most or all of an opposing blue player's hand.

Though it lacks a true sweeper like Wrath of God or Damnation, The Guile Deck commands a superb amount of card advantage, with card drawing aplenty and several card advantage creature suppression cards coming out of the sideboard.

The reason we think about this deck a little differently is the presence of Guile. Tap out for Guile, show the opponent Pact of Negation, show him the front of your hand, the back of your hand, untap, "Spelljack" any and everything else.

Last week's States and Champs showed us a couple of Faer-ly good builds of this teeny tiny Lorwyn tribe... but Robert Jacko's is something else entirely.

Blue-Green Faeries is a light counter creature deck packing a lot of flash, and I mean creatures with flash.

A big advantage for this deck is the ability to never commit on its own turn. Jacko can run a Pestermite during combat, during upkeep, whenever it is least convenient for the opponent. Removal spell about to take out your Scryb Ranger? Why not play Scion of Oona in response? Mistbind Clique seems to be the strongest of the Lorwyn champions; unlike the others, which can expose a deck to removal, Mistbind Clique actually defends creatures from removal.... The whole tapping the opponent out is pretty effective, too.

The most unique thing about this deck is that it is blue-green rather than black-blue. Scryb Ranger is a flashy Faerie, and it fits right in even if its color makes the Ranger atypical for the archetype. Green sets up the Faeries with Pendelhaven (a card they might want anyway) and Mystic Snake (more flashy countermagic); perhaps most importantly, the deck gets a little mana acceleration.

Jacko ran Spectral Force in his sideboard, giving the Faeries the ability to set up some serious violence rather than relying solely on tiny X/1 creatures and some sleight of hand.

Besso said he decided to play the deck that qualified him for PT–Valencia... This one is updated from Time Spiral block Pickles for Standard:

Besso's more conventional build is a pretty straightforward Pickles deck in the vein of Time Spiral block. As with Cheon's deck, Besso's is a control deck (in this case straight blue rather than blue-white) that has a top-end Brine Elemental / Vesuvan Shapeshifter combo. It is essentially a transitioned Block Constructed deck, updated with some new Lorwyn cards and adapted to the Standard environment.

Sower of Temptation – This card gives Pickles some welcome board control, especially in the turns before it can lock down the opponent's mana with Brine Elemental. An all-around good card, and one that can easily be protected from Shriekmaw with any of the deck's permission, including Remove Soul.

Cryptic Command – My guess is that this will prove to be the most important blue card to come out of Lorwyn. In Pickles, this will most commonly serve as a Fog that draws into lands and the combo. Anyway, Pickles has plenty of other permission to lean into, including...

Faerie Trickery – Much better than Cancel, in general, Faerie Trickery is important in Standard to deal with cards like Grim Harvest and Masked Admirers.

Last, but not least, the single big mana deck that represents the remaining colors... 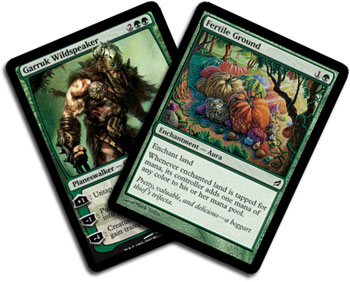 I almost always default to some sort of a big green deck whenever I have the inkling to try to make a new deck, especially when a format is young. Birner's is part of a tradition that stretches back at least to Wafo-Tapa's Pro Tour, but with unique interactions that allow it to truly take advantage of some key new cards.

Big green (or green-red) decks play a kind of softball Tinker. They accelerate mana a little in order to play down powerful, usually huge, threats. In this case, those huge threats include a "187" 5/5 flyer, a 7/7 Hurricane, a singleton X spell, and the mighty Siege-Gang Commander.

In order to get to his high end, Birner runs eleven main deck mana acceleration cards, with support from Harmonize (card advantage) and Garruk Wildspeaker ("There he is! Alert the paparazzi!").

The single coolest thing about this deck, in case you missed it, is Fertile Ground + Garruk Wildspeaker. Fertile Ground works like many other two mana accelerator (all of them get you to Harmonize on turn three, provided you hit your drop)... but with Garruk Wildspeaker, Fertile Ground steals an extra mana should you choose Garruk's +1 ability. Birner's is a good example of tacking a little something extra onto a deck that already works... Just watch out for those Oblivion Rings!