Card Concept: "Who Is This Unsung Hero?" 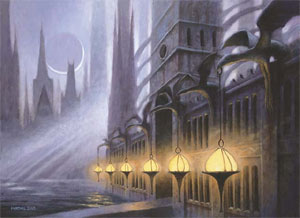 swoop past Orzhova, with its ominous, darkened windows and gargoyle-mounted lanterns. There is an altercation in the streets in the plaza in front of the Church of Deals. We can sense the mounting tension even as we rise up above the steeples. Are those battle cries Gruul? As we climb higher a team of winged thrulls screeches past in cacophonous descent. Our altitude increases and we get a wider view of the district. Though we are farther away, and the sounds of violence are drowned out by the sound of rushing winds, we are able to see the widening rustle of clashing guilds in the streets below. An eerie glow hovers over the tiny square that we think is Orzhova- a paradoxical circle of dark light. It pulses and grows. An explosion of great silence, and all goes white. We have risen into the clouds…

Have we died, and are now ascending to Agyrem, the ghost realm? Were we part of the clash at Orzhova? Or are we on Skyjek patrol, mounted on trained Boros rocs? Well, actually, it’s none of these. We’re just pulling back the camera a bit. The last three weeks of Taste The Magic have been really zoomed in, peeling back the many layers of onion skin that cover the Sengir family, the Nephilim and the Cult of Yore, and the crazy bouncing brains of the Izzet. This week we’re going to get out of the worlds of Magic and take a peek at how the Creative Team makes these worlds live and breathe. If you’re a little bummed that we’re not going to be seeing more of this mysterious clash of guilds, I apologize- but it is a necessary evil. I had to soften the transition for the delicate Vorthosian mind. To quickly jump from the inner workings of the Izzet psyche to the dealings of Earthling mortals would be too much to handle. Minds would shatter, and the halls of Mauzam Asylum would be teeming with Vorthoi. (To help liven your spirits, I suggest you pile up all of your Orzhov cards and all of your Gruul cards, add land, shuffle, and play them against each other to see who comes out on top!)

Anyway, down to the business at hand- Card Concepts. For most of you, this is probably a term you have never heard with regard to Magic cards. It’s a low-profile part of what we do, but immensely important in delivering deep, tasty flavor. Card Concepts are like the offensive line of a football team- all gut, no glory. Without the O-line, a team is doomed to failure.

Card Concept – Who Is This Unsung Hero?

Magicthegathering.com has done a fine job of explaining, through the Making Magic and Latest Developments columns, how Magic cards are born. They’ve walked us through the process of design and development, but usually leave us hanging with something like this:

Then we pick up later on down the line, usually in the Magic Arcana section, with stuff like this, from the January 31 Magic Arcana:

The first step of the creation of a card's art is its art description. The art description tells the artist what the card will do, what its flavor is, and what the mood of the illustration should be. Here were the instructions given to Liam for Scab-Clan Mauler:

Color: Red/green (R/G guild)
Location: A once-decent neighborhood, soon to be a smoldering wreck
Action: Show a charging "Morlock" rider team (one large guy blind and a smaller guy on top with no legs). Focus: the "Morlock" berserkers
Mood: What's yours is mine. As of now.
This card represents what the Gruul do best: raid and pillage areas of the city for food and resources. And this team is one of the frontline raiders. They should look frenzied and brutal.

The term "Morlock" here refers to the mutilated members of the Scab Clan -- those who've suffered injuries and even lost limbs to the machinations of other clans. These guys definitely have something to prove. 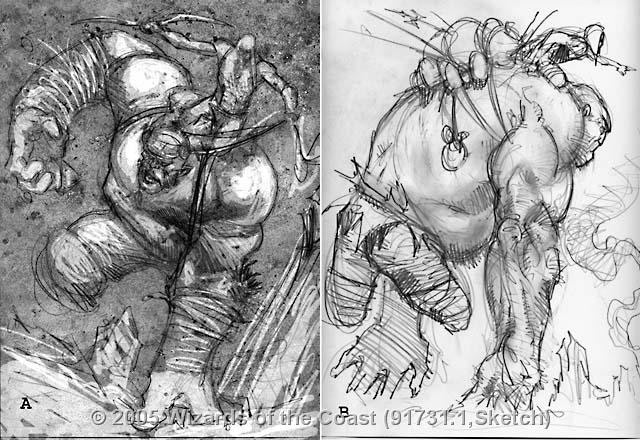 But there is a very important step in between- the card concept. The card concept is the huge leap made from the skeletal mechanics of a card to what the card will actually represent within the “world.” This decision is not talked about much, but its importance is of Autochthonian proportions. The card concept for Scab-Clan Mauler is the initial idea to represent a 1/1 trampler with bloodthirst as a crippled guy riding a disfigured, blind, huge dude (which, by the way, is absolute Gold. Gold, Jerry, Gold!)

As Magic gets older and more cards mount up in the great vaults of Magic history, the card concept becomes more and more important. While it would be sooooo much easier to just cut the artists loose with just the placeholder name, Gruul Berserker, it’s just too risky. The artist may not have much knowledge of what has already been done in Magic art and give us something too close to what we already have. Or the artist might latch onto an incorrect meaning of a word in the placeholder name (see Hyalopterous Lemure.) Most of all, the card concept allows the Creative Team to really nail down what a card mechanic means within the current world. A Gruul berserker means something very different from a Flame-Kin Zealot, and something even more different from a Vulshok Berserker.

In order to make cards work toward building a sense of world, a sense of uniqueness, the card concept is absolutely crucial. It works hand-in-hand with the art description to deliver its important message to artists and writers. The card concept states the function of a particular card – “This warrior represents the mightiest, most skilled of all the barbarians.” The art description would add in specifics about location, costuming, and references to the style guide. Often, the two were redundant, so recently, the card concept and art description steps have been mashed into one super-step. Together, worldbuilders and art directors massage the concepts and tweak them to a point where they ask for enough, but not too much, from the artists. With so many cards that are similar (or identical) to each other, Magic needs a way to make one medium sized green trampler special, even though there are loads of other medium sized green tramplers out there as well. The card concept is the way to do it.

Then we come to Kamigawa. If that is not a complete departure from the style and theme of previous Magic worlds, then I am a Kird Ape’s uncle. In order to really sell the uniqueness of Kamigawa, it was important that medium sized green trampler meant something other than big elephant.

Think of all the sorts of Magic cards that we see multiple versions of; white first strikers, blue flyers, black discard spells, red “X damage” spells. These all need to be framed up in the flavor of the block they come from. Check out all these red “X” spells:

Each one does basically the same thing, but they come at you from a different angle. Heat Ray could have been another flaming ball, but the Urza’s Saga scene affords a more specific opportunity for this spell:

The importance of card concepts becomes even more evident when looking at cards that are repeated in separate blocks. These cards are shining examples of how a card mechanic and card name can be reinterpreted to not only fit in a new setting, but also illuminate what is unique about it. One of my favorite examples of this is with Goblin Spelunkers. The little cavern creepers debuted in Urza’s Saga, and looked like this:

Then 7th Edition came along and the Spelunkers needed a little facelift. Core sets do not have any worldbuilding baggage, so the card concept would have to create a visual or tonal point of difference instead of a thematic one:

Then along come the Ravnica Spelunkers. Spelunkers? In a city world? Sending this off to an artist without a new card concept would have squandered a grand opportunity to say just what “spelunking” means in a world of bricks and beams.

“…clambering about in the rafters…” is the lynch-pin. It’s this sort of application of the card concept that makes Ravnica truly appear like a city world. Without it, we’d be looking at more goblins in caves and Ravnica would be just like any other place that adventuresome goblins have been encountered. Sure, there’s a chance that a sharp artist would have come to this conclusion on her own. But it was right there, so the Creative Team jumped on it. There are plenty of cards that go out with broad, open-ended art descriptions.

Take a look around – you’ll see examples of this on just about every page of your binder. Check out the different iterations of Stone Rain or Befoul. Or, for the grand-daddies of ‘em all, have a peek at the cards that are in every set; Plains, Island, Swamp, Mountain, and Forest. These old-timers are shapeshifters! They illustrate so well what is unique and important to the worlds in which our Magic cards live. And how do they do this? Give that man a prize! That’s right, the card concept.