Mercadian Masques common. Like all pre–race / class Spellshapers, Waterfront Bouncer has since been updated with a "race" creature type to go along with its "class" creature type. Trying to guess what that should be, however, wasn't easy—the art depicts a big blue guy, which might not seem to map to any existing race. The surprising answer, despite the big, beefy legs, is Merfolk! In the storyline, the Saprazzan merfolk of Mercadia were capable of transforming their fins into legs to walk on land. This is clearly visible on, for instance, Saprazzan Bailiff.

Unglued uncommon. Urza's Contact Lenses was a winking reference—if you'll pardon the pun—to Alpha classics Urza's Glasses and Urza's Sunglasses. At this point, though, the central joke—a "clap on, clap off" artifact in the vein of the appliances and accessories popularized in cheesy late 90s TV commercials—is a casualty of the game's changing rules. When Unglued came out in 1998, artifacts "worked" only while untapped, with often confusing exceptions for abilities that wouldn't make sense otherwise, so the Contact Lenses was intended to reveal all players' hands only while untapped.

Time Spiral common. Momentary Blink is a Time Spiral callback to Urza's Destiny rare Flicker. Both cards provide a "reset button" for creatures, but Momentary Blink does so as an instant rather than a sorcery and without the "nontoken" clause. This raises all sorts of interesting rules questions when you Momentary Blink a creature with lethal damage or a kill spell aimed at it on the stack (it's a new creature—it lives), a creature with a sacrifice trigger such as evoke on the stack (it's a new creature—it lives), or a token creature (sorry, that one's gone forever).

Visions uncommon. Becoming a vampire is a very common idea in fantasy, but there are many different ways to approach that flavor in Magic. In the case of Vampirism, the newly vampiric creature feeds on your other creatures, making them weaker and itself stronger. Urza's Saga uncommon Vampiric Embrace is a different approach to the same flavor. Like the other members of the Embrace cycle, it turns any smallish creature into a Magic iconic—in this case, Sengir Vampire.

Champions of Kamigawa common. Some cards in Kamigawa block—such as Rend Spirit and Rend Flesh—play specifically into that set's conflict between the spirit world and the mortal world. Others, however, are more subtle. Red's Shaman-centric subtheme in Kamigawa of removing creatures from the game—also seen on Kumano, Master Yamabushi, Yamabushi's Flame, Frostwielder, Yamabushi's Storm, and Kumano's Blessing—was a hoser for the Spirits' signature keyword mechanic, soulshift. Sorry, Thief of Hope!

Saviors of Kamigawa rare. In the Kamigawa block storyline, the birth of Michiko Konda played an integral part in the machinations of her father, the daimyō Konda. Konda stole an important part of the great kami O-Kagachi, granting him great power but enraging the spirit world in the process, igniting the Kami War.

Odyssey rare. When Otarian Juggernaut was printed, the original Juggernaut hadn't seen print since Revised—it was on the Reserved List—and had even been banned in Extended at one point. It made sense at the time to create a card that was equivalent to Juggernaut but only under certain conditions. Less than a year after Odyssey came out, however, Wizards revised the Reserved List, removing early base set commons and uncommons from it—Juggernaut included. This paved the way for the original to return in Darksteel, and later to reclaim its place in the core set for Tenth Edition.

Champions of Kamigawa uncommon. Kamigawa's spirits were always depicted surrounded by floating "energy objects," which took many forms. In Jim Murray's Teller of Tales, they appeared as fish with hands bearing scrolls—a direction the creative team liked enough to have Murray revisit it in the same set for the art of Eerie Procession. Eerie Procession then served as the inspiration for the Betrayers of Kamigawa Shoals (Shining Shoal, Disrupting Shoal, Sickening Shoal, Blazing Shoal, and Nourishing Shoal). The word "shoal" in this case refers to a school of fish.

Mirage uncommon. Superior Numbers is one of just two cards whose current Oracle wording includes the word "excess"—though other cards, such as Balance of Power, Balance, Restore Balance, and Black Vise—approach the same problem from different perspectives. The other "excess" card, Equipoise, was combined with fellow Visions rare Sands of Time to create a lockdown deck that phased out all of its opponent's permanents for the rest of the game. Superior Numbers was much more innocent, but it did serve as flavorful creature removal in decks that included a lot of creatures.

Mercadian Masques rare. You might assume that "megatherium," like "baloth" and "murlodont," is a made-up, Magic-only word—what former Taste the Magic columnist Matt Cavotta called a "Twinkie"—but you'd be wrong! (You probably saw that coming—it's not as if anyone ever ends that sentence with "and you're right!") Although the art puts a unique Magic spin on it, Megatherium was a real-life genus of massive prehistoric ground sloths that stood twenty feet tall on their hind legs.

Onslaught uncommon. Between the art and the flavor text, Gluttonous Zombie paints a picture of a really disgusting undead dude thriving on the greed and gluttony that killed him. Although the card isn't all that remarkable mechanically (although, interestingly, it was the first 3/3 with fear), the flavor proved memorable enough to inspire an homage in Time Spiral: Corpulent Corpse.

Alliances common. Ice Age was designed as the first "stand-alone expansion set"—what today we would call the first set of a block—and one of its themes was the cooperation of allied colors in the face of increasingly harsh conditions. Staple cards such as Disenchant and Stone Rain were reprinted, and other cards in Ice Age and its expansion Alliances recreated famous cards with a twist. Some were variations modified to work with snow lands, such as Pestilence variant Withering Wisps, but others—such as Essence Filter and Kjeldoran Pride—were allied-color-friendly updates of Alpha cards (in this case, Tranquility and Holy Strength).

Eighth Edition uncommon. In Magic slang, a "Wrath effect" is something that destroys all creatures (or has a pretty good go at it—Tenth Edition's Flowstone Slide, for instance, might be called a Wrath effect). The cards, however, don't agree. Although Wrath of God and Kirtar's Wrath are all about destroying all creatures, the other three cards with "Wrath" in their titles—Wrath of Marit Lage, Alliances oddity Nature's Wrath, and Akroma, Angel of Wrath—are all color hosers, showing their own color's wrath against its enemy colors.

Legends rare. Greed was the first card that let players repeatably pay life for cards (along with, arguably, Sylvan Library), but it would be far from the last. This particular resource conversion proved to be a popular and powerful angle, spawning The Dark’s Book of Rass and Ice Age dominator Necropotence. The enduring impact of “Necro” kept the idea alive, with the Urza's Destiny Yawgmoth’s Bargain and Coldsnap’s Phyrexian Etchings as direct homages to "the Skull." 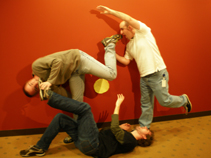 To your left, web developer Dave Guskin (right), Magic Online client and rules lead Ryan Dhuse (left), and magicthegathering.com editor Kelly Digges (bottom) have performed the art of a famous Magic card. Can you identify it?
This card's original Alpha art was iconic enough that it was one of the very first ones we discussed for Card of the Day Charades. Ultimately, though, we decided that we'd done enough Alpha cards (and we wanted to try something more ambitious), so we went for a more recent—but no less striking—illustration.
They've recreated the grisly Ouroboros featured in the art of Tenth EditionTerror. This proved to be quite the little photo shoot—special thanks to MTGO developers Jason Radabaugh (photographer), Lee Sharpe (gaffer), and Trevor Schrock (props). 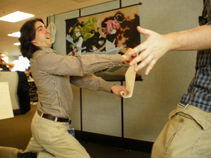 To your left, game designer Gregory Marques is replicating the art of a famous Magic card, with some foreground help from a mysterious stranger. Can you identify it?
Like Monday's card, Counterspell, this card and its art were the subject of an homage in Time Spiral. Unlike Counterspell, however, the difference between this pose and the Time Spiral nod depends on rather more than the position of the thumb.
Greg is doing a pretty good rendition of Tempest powerhouse Cursed Scroll, admittedly minus the background figure (everyone else was busy), which is distinct from Time Spiral's Magus of the Scroll. This one was almost impossible to frame correctly—that's why Gregory is kneeling—leading us to suspect that the person in the foreground in the original art is standing on a box. 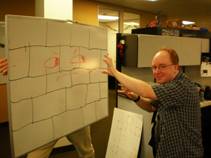 To your left, Digital Games development manager Dylan "Exobyte" Mayo has gone a little overboard in the props department while recreating the art of a famous Magic card. Can you identify it?
This card spent some time as an Enchant Creature (thank heavens those days are over), but that's not what you'd find on the type line below this particular piece of art.
If you played "back in the day" or have opened much Masters Edition, you probably recognized this weird, iconic illustration. It's Animate Wall, circa Alpha through Fourth Edition. Notably, Dylan is really playing the secondary figure here—the real star of this picture is the animated Wall, puppeteered by Gregory Marques. 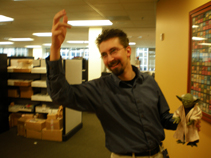 To your left, Digital Games senior producer Nik Davidson has posed with surprising acumen as the art of a famous Magic card. Can you identify it?
Yesterday's card was an Alpha classic; today's is rather more recent. In other words, it's not Fling. Close, though... 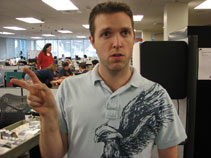 To your left, Magic head developer Devin Low has painstakingly recreated the art of a famous Magic card. Can you identify it?
This card has been reprinted with several different pieces of art, but the art Devin's posing for, the original, was also referenced on a Time Spiral card.
Devin is portraying the art from Counterspell as printed in Alpha, Beta, Unlimited, Revised, and Fourth Edition, but we'd award at least partial credit for guessing Time Spiral's