If you're a fan of Two-Headed Giant (2HG), Battlebond is the set you've been waiting for. While there have been previous sets that have featured mechanics that play nicely in 2HG, Battlebond is the first set that is specifically designed for the 2HG format.

Today, I get to introduce an exciting mythic rare from Battlebond. Say hello to Arcane Artisan! 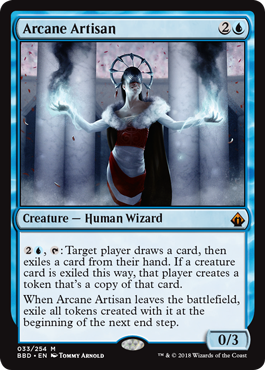 Let's break down this card. The Artisan is pretty inexpensive. Three mana for an 0/3, but it's not like you were planning on attacking or blocking with it. The activated ability is where things get spicy. For three mana, you can tap it to loot, but instead of discarding to the graveyard, you get to exile a card from your hand. If you exile a creature card, you get to make a token copy of the exiled card.

This isn't a temporary effect either; you get to keep the token creature for as long as Arcane Artisan remains on the battlefield. If the Artisan is removed from play, the tokens stay until the beginning of the next end step.

The Artisan's ability works great with large creatures to cheat into play, or creatures with good enters-the-battlefield effects. The tokens you create are fragile, since their existence is contingent on Arcane Artisan living.

Some sweet creatures in this vein are cards like the following:

Note that Reveillark triggers when it leaves play, and Shalai protects the Artisan nicely!

Truthfully, as soon as you cast this card, it'll have a giant bullseye for your opponent's removal. But you only have to activate this card once or twice before it doesn't matter if they kill it—you'll be very far ahead in the game anyway.

Arcane Artisan wouldn't be in Battlebond if it didn't play well in a 2HG or multiplayer environment, which is why its ability can target players other than yourself. This is nice, since you'll be able to target your teammate and cheat their bombs into play, or even help them smooth out draws or find more threats.

One of the cooler features of this card is that the ability can be activated at instant speed. This matters because it makes your opponent's attack step scary. They could attack into you, but you could be representing a giant blocker they have no idea about. The token copies you create don't have haste, so activating the Artisan on your opponent's end step also ensures your creature can start attacking as soon as you untap.

You can let me know on Twitter @gabyspartz or on my stream at twitch.tv/gabyspartz. Enjoy!