Playing Two-Headed Giant events at Prereleases are some of my best early Magic memories. At first, it was a straightforward application of the theory that two minds are better than one, especially when one of those minds has, at best, a very beginner-level understanding of the game.

As I got better at Magic, understanding more not just about what the cards did but the strategy behind the game, enjoying Two-Headed Giant became about celebrating wins and mourning losses with my friends (or, honestly, celebrating the losses too, as long as the story was good enough). We shared a pool of cards, a game plan, a life total, and a tournament record, but against all the principles of math, our enjoyment was exponentially increased.

Sometimes Two-Headed Giant games go flawlessly, with both teammates drawing creatures and spells, developing the board, and getting into combat. But sometimes, one player is left pulling the weight as their teammate draws land after land, or stays a mana short of casting their most powerful spells. One teammate is left in charge of keeping the game afloat until the tides turn and their partner is once again casting spells and getting into the red zone.

It's one of the terrors of Two-Headed Giant, and one of the joys. You're not doing much, but you still have a shot at winning the game. As much as you want to be there for your teammate, however, your deck just isn't cooperating. You're like one half of a three-legged-race team, except both your legs are tied together (this simile works, I'm sure of it).

Quick side story: I had a brief and painful dive into the world of cross-country running in high school. For three years, I got up hours earlier than I needed to so that I could practice a sport in which the only real skill is ignoring that you're miserable, just so that I could spend my weekends sweating in 90-degree weather.

But this article, surprisingly, isn't about how much I hate cross-country running. It would, for starters, be a lot longer and more tedious, just like cross-country (okay I'm done, I promise). As difficult as cross-country was for me, I went back year after year, because as much as it seems like a sport that you're competing in alone, my teammates always made me feel like we were all in it together. It's keeping pace with my teammates as we slogged across yet another hot, sun-scorched field at a cross-country meet, encouraging one another as we traded positions in the pack, that I remember most.

Sure, I don't need encouragement to play Magic the way I needed it to keep running, but my favorite parts of Grand Prix and Prereleases are the time that I spend with friends. So, what if I told you there was a card that, once in play, would make sure you're always there for your teammate, cheering them on, giving them the encouragement and the boost they need to take the two of you across the finish line together, and in first place? 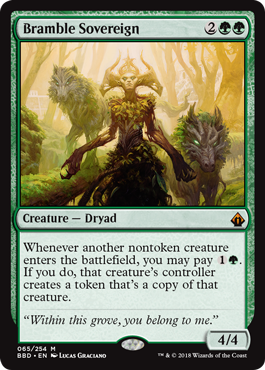 I imagine that activating Bramble Sovereign's ability on your teammate's creatures will feel a lot like the on-the-board equivalent of giving them a thumbs up or high five. It's like yelling "YEAH, THAT CREATURE IS GREAT! SO GREAT, WE SHOULD MAKE ANOTHER ONE!" but a lot more appropriate for being indoors.

I'll admit, I initially got stuck contemplating all the exciting possibilities of Bramble Sovereign's activated ability. It's a copy that sticks around forever! Like so many tokens before it, it's not destined to jump into combat for a turn and then disappear into token exile (where countless sad 3/1 Elementals live). Imagine the possibilities for enters-the-battlefield triggers! You can use it on your own creatures! Your teammate's creatures! I'm absolutely certain that if we think about it hard enough, we can come up with a time when using it on our opponents' creatures would be correct!

And yes, that's all great, but let's also not ignore that Bramble Sovereign, with their giant wolves made of living trees (somehow, wolves can get even cooler than they already are?!), is a hefty 4/4 for four mana. I love an exciting creature that's also substantial enough to hold the ground so I don't lose the game waiting around to use its sweet ability. At four mana, Bramble Sovereign is also costed so that it's not going to come into play after we've already cast the bulk of our creatures. If we cast this on-curve, the best of our teams' creatures are likely still to come.

I'm also excited to see this card work its way into Commander. Sure, there's the straightforward application of copying your own creatures, but once you throw in the politics of selectively copying creatures for other players at the table, Bramble Sovereign becomes a powerful bargaining tool.

I, for one, can't wait to use Bramble Sovereign's ability on my teammate's creature, all while yelling, "LET'S MAKE TWO OF THAT, JUST LIKE THERE ARE TWO OF US!"