Greetings everyone! The most exciting preview season in the history of preview seasons is finally upon us. (I might be a little biased.) Today I want to share with you some interesting tidbits from our testing process for Modern Horizons. I also have a preview card to share with you, and I'll be dropping hints about it as we go.

Let's start with Play Design. Much has been written over the last year about the Play Design team, the group of designers that plays countless games with our newest sets in the Standard format. Iterating on designs over and again until they become F.I.R.E. (Fun, Inviting, Replayable, and Exciting). Play Design is full of expert-level Magic players, and their knowledge of the game helps us craft awesome Standard and Limited environments. While they could spare some time to help test Modern every so often, that time alone would not be enough to execute on a fully polished new-to-Modern set. It became evident that additional resources were necessary.

Enter Tom "The Boss" Ross and myself who, along with Michael Majors and Adam Prosak, would split off from the bulk of the Play Design team to create the Modern Future Future League. This new team would be responsible for bringing the F.I.R.E. to Modern Horizons. Additionally, as Modern format experts, we could ensure there were a few gems in each of our Standard sets that would appeal to Modern players.

Hint 2: It's originally from a Commander product.

Testing new cards for Modern is extremely challenging. Modern, introduced to the world in 2011, is a non-rotating format that changes slowly over time when cards enter it from Standard sets, or occasionally leave it due to a banning. This means that some decks in Modern have existed for nearly a decade. Burn, Jund, Affinity, Storm, Tron, and other decks have been fine-tuned for years. Years! We would have mere months.

Imagine trying to test new card designs when your opponent begins with the following sequence:

Sometimes it was downright comical trying to gain information on our early designs while playing versus everyday Modern lines of play. Our new cards would have to compete with a history of the most powerful designs from their respective sets.

Modern Horizons had many goals, some of which would need to be threaded as delicately as a needle. It was important that the set invoked nostalgia in the way Time Spiral had for many Magic fans. Some cards would be a subtle reference or joke to an iconic card from the past. Commander, another extremely strong format, would also want cards that couldn't be crafted in Standard-legal sets. The Booster Draft format should be strong, replayable, and fun. None of these things could carry the set on its own. Checking all these boxes while also making sure the cards in this set could compete with some of the strongest designs from the past decade became the name of the game.

Hint 4: It has a keyword older than the Modern format itself.

We had to combine some of these goals in order to meet them all. Only including reprint cards that would be new to Modern would be a way to hit both nostalgia and power with one big stone. What could we include in Modern Horizons that would make for a more fun environment? Could these cards be added to existing decks and slightly nudge their positions in the metagame? Would they create brand-new archetypes by filling the hole in some strategy that was close to breaking through? Our collective reprint decisions would need to do all this and more.

The preview card I have for you today is just the tip of the iceberg. In choosing the following card, we hoped to make Modern more fun and allow a wider variety of decks to jostle for position in the metagame.

Have you guessed it yet?

Created for the original Commander product, then offered as a judge promo and featured in Iconic Masters, Flusterstorm has finally found its way into the Modern format! 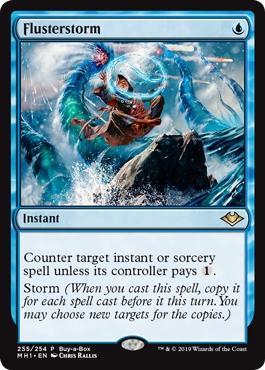 Instants and sorceries getting you down? Trying to defend against a storm combo? Trying to force your storm combo to resolve? Need a bunch of cheap spells to exile with your Nivmagus Elemental? No matter your problem, Flusterstorm to the rescue!

Fourteen copies of Empty the Warrens on the stack? Flusterstorm.

An extremely versatile and powerful spell has been added to Modern. Use it wisely.

Unfortunately, by the time Flusterstorm was considered as an option for the set, we had gotten to a point where we liked what most of the blue rare and mythic rare cards were doing even if their designs weren't completely final. The collective group was meeting most of the goals for the product, and we didn't really want to change anything. At that same time, product architects Mark Heggen and Mark Globus were looking at the file and asking if we could produce candidates from the set that could possibly be used as the Buy-a-Box promotion.

I think you see where I'm going with this.

The Marks gave us an out to include Flusterstorm in the set as the Buy-a-Box promo, thus making it finally legal in Modern. Much like Buy-a-Box promos for our last few sets, Flusterstorm will not be available in normal Modern Horizons booster packs. However, unlike every Buy-a-Box card in the promotion's entire history, this version will only appear in non-foil.

Make sure to check out all the wonderful Modern Horizons preview cards from around the web all this week and next, including another one from me later this week!