I've always been fascinated with Stonehenge. The circle of massive trilithons in England is easy to describe but difficult to explain. To this fantasy-obsessed kid, Stonehenge always felt like one of the truly magical places on Earth. Was it made by druids or maybe aliens? Giants? Giant alien druids?

Sometime around the 12th century, British cleric Geoffrey of Monmouth recorded a tale which credited the wizard Merlin with construction of the monument, indelibly linking Stonehenge with the world of the fantastic and the myths of King Arthur and Camelot.

Which then, of course, makes it a perfect bit of inspiration for the world of Eldraine.

The castle occupied by Eldraine's green court is Garenbrig, the Great Henge, named so because of the huge monument that dominates it—a stone ring built by giants before humans rose to power. The Henge is both an enormous sundial and a magical portal into the heart of the Wilds.

It is also the last in the cycle of mythic rare legendary artifacts revered by the five courts, joining The Circle of Loyalty, The Magic Mirror, The Cauldron of Eternity, and Embercleave, all of which have been previewed already. 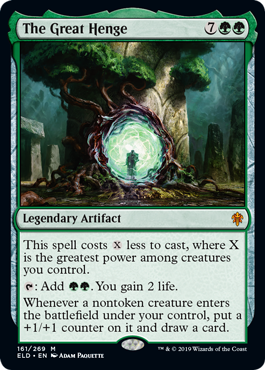 Nine mana reads like a lot, but just like the rest of the cycle, the Henge has a built-in "quest" to make the cost more manageable. And as Ghalta, Primal Hunger showed us over the previous two years, cost reduction based on power of creatures is quite achievable. And while stat-monster Steel Leaf Champion no longer graces Standard as of Throne of Eldraine, there will be plenty of sizeable threats available, including the leader of the green court, Yorvo, Lord of Garenbrig.

Once you have The Great Henge on the table, the goodies never stop flowing. The Henge provides generously, giving you mana, life, cards, and additional stats, and all you need to do is keep playing creatures!

The Mechanic That Wasn't

Previous articles by my esteemed colleagues Mr. Rosewater and Mr. Gottlieb both described how quests were at one point a formal mechanic in Throne of Eldraine but were removed for various reasons.

I was fortunate to be on the Throne of Eldraine team for the first half of set design. It was an incredibly fun team to be on, as top-down design is one of my greatest joys, and during my stint on the team, we nailed down all the mechanics we wanted in the set, coming up with Food tokens and Adventure, and firming up adamant.

Quests were in the set for most of that time. These weren't Quests like we saw in original Zendikar, but more like three-item checklists that, once completed, generated an effect (you'd have to track what you'd accomplished over the course of the game). A (not real) example would be:

(Mark off each as you accomplish it. When you've accomplished them all, sacrifice this for your reward.)
[ ] Attack with a creature with flying.
[ ] Cast an artifact spell.
[ ] Create a creature token.
Reward: Gain 10 life and draw a card.

While I love game-within-a-game cards like these, they were hard to design—especially if we wanted them to be flavorful—and harder to balance.

Ultimately, almost all of them were purged from the set—but I held onto hope that we could get a small number of them to work and that the mechanic was worth preserving as a cycle of mythic rares. The cycle were all Quests to find the five legendary artifacts.

In the earliest version of this mechanic, the artifacts themselves were powerful cards that you could not include in your deck. So, you'd put "Quest for the Great Henge" in your deck, and when you completed it, your reward would be "Reward: Put a card named The Great Henge onto the battlefield from outside the game." The Great Henge was some ridiculously undercosted version of what we actually printed; imagine the card above (without the cost reduction) at a mana cost of 2G, but with the caveat of "This card cannot be in your deck."

That caveat was a huge turnoff for lots of people, especially those that encountered The Great Henge without ever seeing the Quest. So, we tried something else, changing the reward on the Quest to "Reward: Create The Great Henge." In this world, The Great Henge itself was a token card, with lots of rules text. We deliberately did not spell out what the token did on the Quest card, which made the card both more elegant and more mysterious.

Of course, this meant that you'd need the physical token every time you wanted to play with the Quest, which potentially was a big problem in Limited, as the tokens would appear quite infrequently in booster packs. To solve this, we sought ways to automatically pair the token and the Quest in all the boosters they appeared in.

As those explorations were ongoing—and they were more difficult than I'd hoped—several people kept bringing up the elephant in the room: while these Quest-plus-reward packages were charming, they were essentially double-faced cards in disguise, not unlike Legion's Landing and Treasure Map from Ixalan.

I really didn't want DFCs here, as none of the other aspects of the set worked that way, and we already had Adventure as a kind of "two-cards-in-one" mechanic. So, in the face of foundering support and increasing difficulty in execution, I gave up on my somewhat harebrained idea, and the Quest aspect of the artifacts were folded into the artifacts themselves. Now, they're self-contained, simpler, and still have all the great gameplay I was hoping for.

Making a Magic card that evokes Stonehenge is certainly cool, but earlier this year I got to cross off an item that had been on my bucket list much longer than that.

In the days leading up to Mythic Championship II in London, I got to spend some time sightseeing (it was my first time in England!). Play Design manager Bryan Hawley and I took a tour bus to Windsor Castle, Oxford University, and, yes, Stonehenge. It was as magical as I had imagined.

You can embark on quests of your own when Throne of Eldraine Prereleases kick off around the world on September 28–29!