The Card That Changed My Life

I remember when I started playing Magic seventeen years ago. Dinosaurs roamed the earth, civilization had yet to be fully built, and Invasion was the hottest set since the invention of fire.

As I began to learn Magic strategy by flailing around in the dark on some primitive version of the internet, I very quickly learned two things: aggro and control. The building blocks of the paradigm of Magic strategy.

And that's why I'll never forget my reaction at an auspicious August Friday Night Magic down at Bigfoot's Game Store.

My opponent played a Llanowar Elves. A Gaea's Skyfolk. A pair of Blurred Mongooses. Then he just passed the turn.

My smug eleven-year-old face dropped the Wrath of God . . .

. . . And looked up to see an equally smug 20-something-year-old face as he dropped a card of his own onto the table.

And that's when I knew there was more to this game than I thought.

The idea of playing counterspells in your aggressive decks was revolutionary to me. Magic wasn't just a defined set of archetypes, with certain cards fitting certain decks; there were many more ways to connect the pieces and build them.

What is one of a creature-focused deck's natural weaknesses? Removing all your permanent damage sources.

Red fights back with burn spells and haste creatures. If your opponent sweeps your board, you can still push through the damage you need. That's why it's a classic fit.

Black takes advantage of its discard and resilience. Either they can't cast the spell in the first place, or your creatures can come back from the dead for a second go.

But blue—blue can shore up that weakness with countermagic. And best of all, your opponent is forced to commit the mana and spend an entire turn in the process.

Something clicked instantaneously. I began to see a range of infinite possibilities. My spark ignited.

And that's when I first met Mystic Snake.

Mystic Snake may have belonged to another on our first encounter, but a week later I had won it over to my side. Completely enamored with the Snake's sultry hiss, I built up my own green and blue deck featuring four copies of the flashy green-blue card.

Armed with the likes of Jade Leech, Æther Mutation, and a single Living Airship ("Unsinkable," I claimed, not unlike the Titanic), I had replaced some of the weaker low-mana cards from my opponent's deck the previous week. I was ready.

I got off my Mystic Snake in both games of my first round, but it didn't help me win. Then I lost again. And then, as if I needed more of a gut-punch, I was handed the bye.

The player from the previous week saw what I was trying to do with my deck. And after I watched him mop up yet another opponent with some piddly Elves and Mongeese, he took me aside for a lesson.

"This deck only works because I already have cheap creatures in play and can leave up mana."

If the expanding brain meme had existed in 2001, I would have made one for this learning process. (Reddit, you're up!)

I swapped out some Jade Leeches for Gaea's Skyfolk and some Living Airships for Fact or Fictions over the next week, and everything turned around. I quickly learned the amazing feeling of passing the turn with both a Fact or Fiction and a Mystic Snake in your grip, and I only lost to the mirror match the next week at FNM.

It was working. And when you're eleven and new to Magic tournaments, going 3-1 at an FNM might as well be the same as making Day Two of a Grand Prix.

My Mystic Snake deck changed the whole view I had on Magic. I played almost exclusively green-blue decks using the card. Even the Green-Blue Madness deck I eventually moved to featured my darling Snake. I didn't care what the decklists that were posted online said—I was playing Mystic Snake.

Then eventually, like all cards, it rotated out of Standard. After two years, my scaled friend and I parted ways. We were just going in different directions.

And that was that.

I had never vocalized so loudly at a card preview before. But there it was. On my screen.

There were a lot of cards being shown off in Time Spiral. Many exciting throwbacks to past cards and sets. But the funny thing about a set revolving around nostalgia is that everybody is nostalgic for something different.

Some people were excited for a throwback to Rebels (the creature type). Old-school players enjoyed the return of Vesuvan Doppelganger as Vesuvan Shapeshifter. Maybe someone out there even was glad that they finally got their dream of a Cloud Djinn–Electric Eel mashup in Stormcloud Djinn.

And for me, it was Mystic Snake.

Reprints of multicolored cards were extremely uncommon back then, let alone in sets that inserted cards into Standard. This was even before the time of Masters sets, or printing multicolored cards that often in sets at all. Mystic Snake had been given a very rare second chance—and I wasn't going to squander it.

I saw a whole new world with my darling Snake. Sure, I took my learnings from a few years prior and played Mystic Snake in the classic way (with some new trappings) to some very successful finishes. (It turns out suspend creatures like Riftwing Cloudskate and flash creatures like Venser, Shaper Savant are good buddies with this Snake.) But the real breakthrough came somewhere else.

It was with this lovely card:

It turns out you can teach an old Snake new tricks.

People had tried with cards like Crystal Shard in casual formats before, but this was the first time I noticed it was Standard-legal and competitive. Many a game was ended by Mystic Snake followed by Momentary Blink.

Just because you know how a card operated the first time around doesn't mean that's all it can do. Just like years before, when Mystic Snake revealed its den of strategic secrets, this time around it taught me an important lesson: when a card comes back, look for new ways to use it. A different environment lends itself to different rules—and different synergies.

And those lessons lived on. For example, when I built the green-blue deck that carried Ben Hayes to an undefeated Constructed record at Pro Tour San Juan, I used the same principles I learned from Mystic Snake to guide me. I still have an affinity for green-blue to this day, using those experiences as a launch pad for building new decks.

Plus, as a 2/2, it's even a Bear-Snake—an animal combination that has become my calling card.

Without Mystic Snake opening my eyes back at the very beginning, there's a chance that I would never have gotten a job at Wizards, never played on the Pro Tour, and maybe even never continued much further with Magic.

I sincerely don't know where I'd be today without Mystic Snake.

Since Time Spiral, Mystic Snake has been printed a few other times. Commander (2015 Edition) and Modern Masters 2015 Edition both tried the Snake on for size. I like to think it keeps getting reprinted in part because of how many others have had a similar experience; this Snake still has plenty to teach.

I'm thrilled that today, as you may have guessed, I get to announce its reappearance in yet another nostalgia-tinged set: 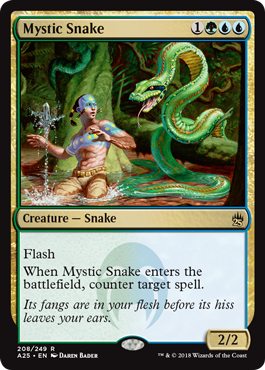 I asked for this preview not because it's necessarily the flashiest card in the Modern format (that honor, of course, goes to Teferi, Mage of Zhalfir), but because I wanted the chance to share the story of Mystic Snake and myself with the world. And I hope that with Masters 25, as you're opening packs and trying to find the mythic rares everybody wants, you can take a brief moment to look at the cards and find one or two that take you back to what entranced you about the game right at the very beginning.

Have a story to share? I'd love to hear it! Feel free to send it to me on Twitter, on Tumblr, or (in English, please) at BeyondBasicsMagic@gmail.com.

May you find the Mystic Snake of your Magic life,