Creeping Inn to the Hostile Hostel

Hey, all! I'm Reggie, a designer for Magic: The Gathering. Innistrad: Midnight Hunt was one of my first sets, so it's near and dear to my heart. This preview card's story starts shortly after Set Lead Ian Duke took over the project, then codenamed "Golf." The team had just reviewed the set's rares and figured out a few places we wanted new designs, and one slot was a double-faced card, mostly likely a land that could maybe be a haunted house.

One of my favorite cards from Shadows over Innistrad was Westvale Abbey. I loved how well the card told a story, and it was awesome to create a giant Demon out of small creatures and tokens. I wanted to think up a card that could fill the same role in a deck but while telling a new story. The first thing my mind went to was the trope space of the haunted house that itself is the evil entity; creatures could go "missing" until the card transforms and the true threat is revealed: the living house! I excitedly scribbled down a first sketch of the idea: 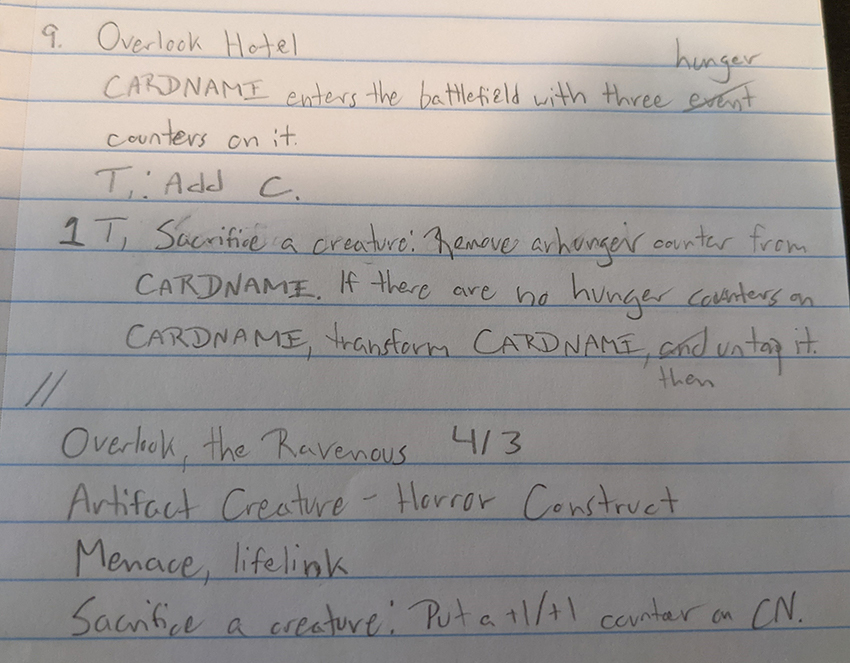 And for those who can't read my chicken scratch:

I wasn't thrilled with every aspect of the design, but I still decided to pitch it to the team, and it made it into the file, with a few tweaks. One bittersweet change was that the creature got new abilities, including flying, so Ian switched it to a black Demon rather than my intended Horror Construct "living house" idea. Another change I loved was thanks to Mark Gottlieb, who is a wordsmith in more ways than one, and he was in the process of updating our playtest names. Seeing that my submitted name was just a little on the nose, he changed it to a new name that used a mnemonic to associate the two halves of the card together; "Remote Hostel" and "Goremaw, the Hostile."

The new card in the file was a marked improvement on the original pitch, but I couldn't let my dream of the monstrous house die. Over the coming months I persisted when and where I could, leaving developer comments in the card file:

RegV: Original intent was for the creature to be a Horror Construct to be a house come to life. If this ever wants to lose Flying, I'd love to see that return.

ID: We'll leave it up to Doug whether he likes "this is the thing haunting the house" or "the house itself is the monster!"

Months later, nearly every card's art had a written concept, and I had given up hope, but then, the remarkable happened. The Play Design team had started playtesting with cards from Innistrad: Midnight Hunt and determined they wanted to change the ability suite on the backside of Remote Hostel again, which meant Goremaw lost flying! Less than a week before the card got a written concept, things lined up perfectly, and the folks in Creative actually went with a Horror Construct rather than a Demon. But in the end, did the idea I had in my head live up to the hype? Look for yourself: 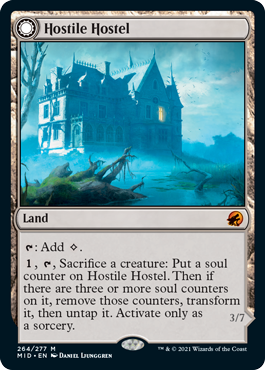 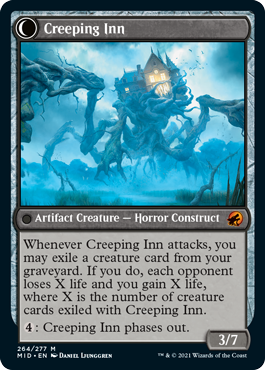 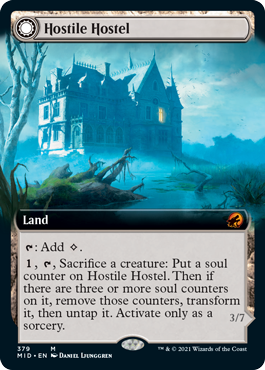 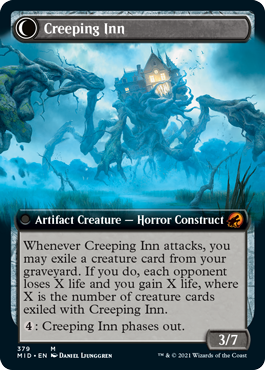 The art is what I hoped it would be and then some, and even the hostel/hostile wordplay came back around, with Creative finishing the alley-oop Gottlieb sent them. Hostile Hostel offers decks a low-opportunity-cost sacrifice outlet and eventually a resilient finisher with some reach via Creeping Inn. Phasing was a late addition as we continued to explore design space for the mechanic. Here, it offers protection like we've seen on Aetherling's exile ability but in a way that works with a transforming double-faced card.

Here's to hoping you all enjoy playing with it and the other cards in Innistrad: Midnight Hunt!