This Standard season, you can cast a 7/6 for three mana. With minimal investment, you can even cast it for two. A pair of Dinosaur friends, if Dinosaurs even have friends, are poised to stampede through Standard, making the most out of all those dinos from Ixalan before the meteor of rotation comes for them this fall. 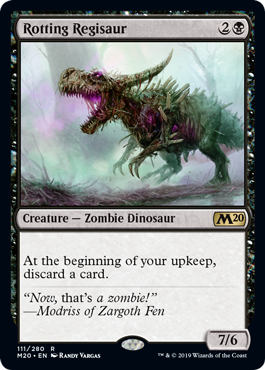 I think Modriss really says it all. Now that's a zombie. Regisaurs have seen some tough times since their heyday on Ixalan, but if there's a lesson here it's that . . . rotting . . . doesn't always . . . make you . . . worse? While perhaps not applicable in all areas of life and death, Rotting Regisaur is certainly making a case for it in Core Set 2020.

Of course, a creature like that can't come without some sort of drawback, and Rotting Regisaur's is hefty. Discarding a card on your upkeep has the potential to cost you relevant spells out of your hand, while instant-speed interaction like Cast Down means that the Regisaur won't even get in for an attack.

In Limited, a 7/6 is a big enough advantage all on its own that you'll likely play it and hope for the best. When we look at Rotting Regisaur and its chances in Standard, the question becomes "How bad is that downside, really?"

Rotting Regisaur specifically says that you have to discard a card during your upkeep, meaning that, if you have an empty hand, you'll discard nothing and still get to draw and keep your card for the turn. Play it on turn three, and you're going to be miles ahead on board. Play it later in the game, and there's a decent chance you won't even have a card to discard during your upkeep.

Then there's the fact that mono-red is still torching its way through Standard, and a 7/6 is an almost insurmountable roadblock for that deck. Sure, you're discarding, but there's almost no chance they can get around this Dinosaur without throwing at least two spells at it.

Plus, while Cast Down is a real sticking point, there's also a wealth of sorcery-speed removal, such as Kaya's Wrath or Teferi, Time Raveler, that will either get rid of Rotting Regisaur before you have to discard or after it's already taken a chunk out of your opponent's life total.

Overall, things don't look as bad for Rotting Regisaur as they could be. A 7/6 is a fearsome beast that can end a game quickly, and while there are definitely spells that will make that discard a liability, there's room to maneuver. And, outside the sphere of Standard, there's always the chance to change that downside upside-down . . . you know, into an upside. Point is, playing Rotting Regisaur in a format with madness will turn this dino from a liability into a boon pretty quickly. The afterlife is ripe with possibility.

And now, about casting Rotting Regisaur for two mana instead of three. To achieve that, I give you today's second dino, Marauding Raptor. 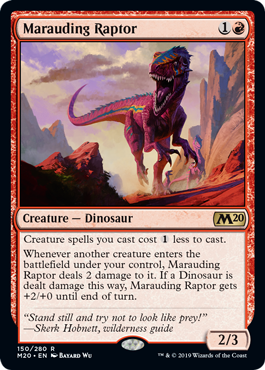 Marauding Raptor is an aggressive little Dinosaur that not only has the potential to attack for a bundle, but will also help you swarm the board by reducing the casting cost on all your creatures.

Of course, if monster movies have taught us anything, it's that too many Dinosaurs in one place always comes with a downside. In this case, they're dealing damage to their own team, which seems about right. Like Rotting Regisaur, however, Marauding Raptor's downside isn't actually that bad when we take a closer look. In fact, all that damage just might be a good thing.

Obviously, there are creatures that won't mind the damage from Marauding Raptor. We're going to focus on the Dinosaurs, since we want that sweet +2/+0 when we're attacking.

Here are a few Dinosaurs that just don't care that Marauding Raptor sometimes turns its talons on its own team:

But why would we stop at Dinosaurs that can take 2 damage without issue, when we can prioritize dinos that will actively give us a bonus when Marauding Raptor hits them for 2?

If we want to get even more lands on the battlefield, we can always add a Ranging Raptors into the mix, ramping our mana and pushing us toward the most powerful Dinosaurs in the format.

Then again, why get fancy when you can just get literally infinite Polyraptors? Actually infinite. They never stop.

And these are just a few of the potential cards to pair with Marauding Raptor. There are less Dinosaur-centric but still powerful builds that will welcome this little Dinosaur, though, it's worth noting, multiple copies on the battlefield might create a problem if you're trying to cast any other creatures.

Will you put these aggressive Dinosaurs to work in tandem, or will they face off from opposite sides of the battlefield in what is surely a 100% accurate recreation of how real Dinosaurs behaved? Only the coming Standard season can say.