Dominaria Card of the Day: The First Eruption

Yesterday, we looked at the legendary origins of magic on Dominaria; today, we explore the creation of the land of Shiv, home of the Shivan Dragon.

First, the card that depicts this story: The First Eruption. 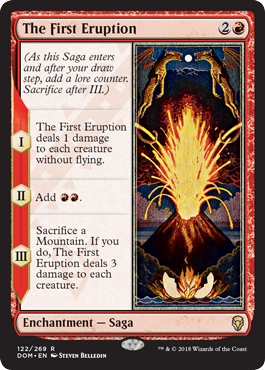 The First Eruption is the creation myth of the land of Shiv, as told by its people, the Ghitu. The story goes like this:

Shiv itself hatched from an egg—"a shell of stone around a yolk of flame"—and basks in the heat of primordial Dominaria, shedding its "scales" with each new eruption. The inhabitants of Shiv were born from its elements—the Ghitu were born of the fire, the Dragons of the air, and the Viashino of the earth.

The story goes on to talk about Shiv itself punishing its nations for battling among themselves, driving them together through shared hardship. The modern-day Shivan Nation, then, is the result of hardship and alliance between all of Shiv's people, as forged by the land itself.

In addition to Ghitu, Dragons, and Viashino, Goblins make up a sizeable portion of the Shivan population. Interestingly, Moggs from Rath were introduced into the Goblin population around 4205 AR, causing some evolutionary changes among the Goblins. Despite being poorly regarded for much of Shiv's history, the Shivan Nation now regards them as equals alongside the Ghitu, Dragons, and Viashino.

The unique visual style of The First Eruption's art, as brought to us by Steven Belledin, seeks to weave the Ghitu's customs into the visual. Here's part of the description Steven was working with:

This Saga is a woven tapestry depicting a myth told by the Ghitu people of Shiv. The Ghitu are nomads, so they weave representations of their important stories into tapestries that they can roll up and take with them.

This Saga depicts an enormous volcanic eruption that, according to the Ghitu, gave rise to their fiery home continent of Shiv. They believe that Shiv "hatched from a shell of stone around a yolk of flame."