Dominaria Card of the Day: The Mirari Conjecture

Today we're taking up one of the most flavorful (which is saying something) Sagas in the set, The Mirari Conjecture. 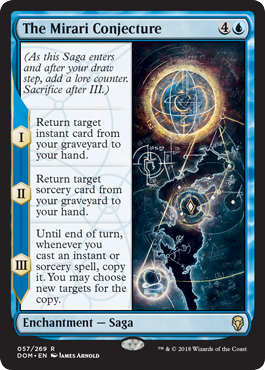 The Mirari was a curious object that caused all kinds of trouble on Dominaria, where it was something of a wish-granting artifact that was the cause of basically everything bad that happened in Odyssey block. Chainer used it to take over the Cabal (and also to accidentally destroy its capital), it flooded Otaria, it caused Kamahl to go crazy for a while, and it caused all kinds of weird growths while plunged into the wild.

Oh, and then it was used to create Memnarch, who went on to create all kinds of problems on Mirrodin. All of this from what was created by Karn to basically just be a probe. Look, Karn's track record hasn't been great.

But the Mirari itself has a track record of being great in tournaments—and also doubling things.

The Mirari Conjecture is a bit of a different take on the story of the Mirari. Instead of detailing what the Mirari was, it shows how modern-day Tolarians (we're now comfortably past 4500 AR, when the Great Mending took place) are studying and tracking the effects of the Mirari. The way the art description puts it is "Imagine trying to reverse-engineer a nuclear bomb from a fallout map—except they're having some success with it."

The art, then, depicts spots on a map where measurements were taken and observations were made. It's basically wizard calculus, trying to discern the nature of the Mirari's magic. Based on that third ability, they're doing a pretty good job of figuring it out.