When the final Duel Decks releases April 6, it will mark the end of an era.

But why dwell on that when we can look at sweet previews of the decks? Yay previews!

First up, let's check out that packaging! 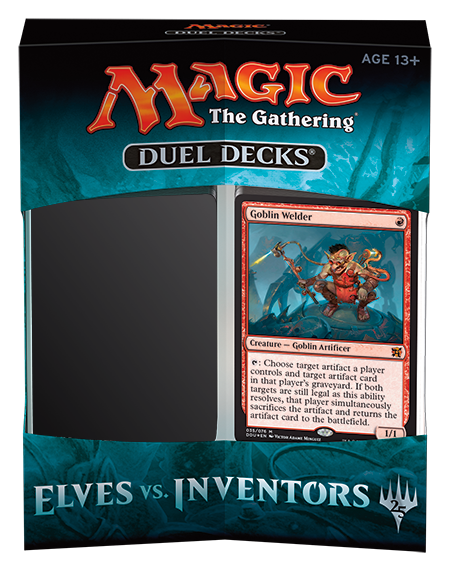 Before we get to the weird black spot we've placed over the Elves side (no, that's not how it really looks), let's zoom in closer on the Inventors.

Yup, that's our old friend Goblin Welder! What's it going to be welding? Well, we're not going to show you everything yet, but this particular Goblin will have some friends to help out its welding, like Solemn Simulacrum, Thopter Assembly, and Shivan Reef. Thopter Assembly is even getting some new Kaladesh-themed art!

As for the other side, we've got something a bit special planned for that card. We'll explain as we get closer to the release date (April 6, natch). But I can tell you that the card is Ezuri, Renegade Leader, and he's getting new art that looks a bit like this:

Obviously, Ezuri will be bringing some Elf friends (and friends of Elves) with him. Elvish Archdruid, Regal Force, and Sylvan Advocate will all be making appearances. Elvish Archdruid even gets updated art!

It's a safe bet there will be some other Elves involved as well. You'll find out more as we get closer to that April 6 release date!