For Dominaria, I previewed Marwyn, the Nurturer. She is certainly a powerful card, and supportive of her fellow Elves, but I think it's safe to say she is maybe not the best team player? Elves enter the battlefield, and she uses their presence to make herself very powerful. With the right pump spells, Marwyn doesn't technically need other Elves to get wins. Check out this fun mono-green Elf "storm" deck for proof.

To be fair, I don't think one gets to be a legendary Elf without a large dose of self-reliance. In times of adversity and struggle, someone must take charge.

But what about the Elves who are in the thick of their tribe's efforts and battles, committing to the largely unnoticed yet extremely important work of spreading community and supporting other Elves? 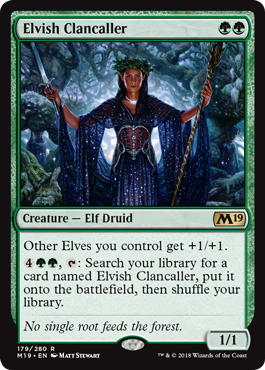 Clearly the focus of an Elvish Clancaller is to foster community and a sense of togetherness. While a legend like Marwyn is more used to taking matters into their own hands, Clancallers make motivating and informing those around them their priority.

This is reflected in the flavor of the card, but also in the mechanics.

Clancallers are Elf "lords," bolstering their tribe with +1/+1 when they are present. But they also have a bit of a rebellious streak in them as well.

Introduced in Mercadian Masques block, Rebels were given a mechanic that allowed you to search your library and pay for another Rebel "up the chain," bringing the new creature unto the battlefield at instant speed.

There are a lot of reasons the Rebel mechanic was strong at the time:

When I saw the activated ability for Elvish Clancaller, my brain immediately went back to this mechanic to notice the similarities and the differences. A lot is the same, but the Elvish Clancaller's ability is much more tightly scoped and limited. But within these constraints are some of its most appealing qualities.

What I like about the Elven Clancaller's mechanic from a flavor perspective is that it borrows from the Rebel's ability to connect to others of their tribe but refines it to an even smaller community (Clancallers) within the larger tribe/community of Elves. An Elvish Clancaller is an Elf, yes, but it serves a specific role. That is why Clancallers can only search and summon other Clancallers.

I love it when a Magic card comes together like this.

But what will this look like in an actual game?

At first glance, the Clancaller's ability looks a bit expensive. 4GG? to summon a 1/1 lord? I'll first point at the above advantages that make that pricing more than fair, but then I want to emphatically point at its tribe.

It's an Elf; mana is not in short supply. At the time of this preview there are four mana-producing Elves in Standard with converted mana costs 2 and below:

We have Marwyn and Rishkar, who both like to generate mana in their own way.

Getting 4GG for an Elf is pretty darn easy: 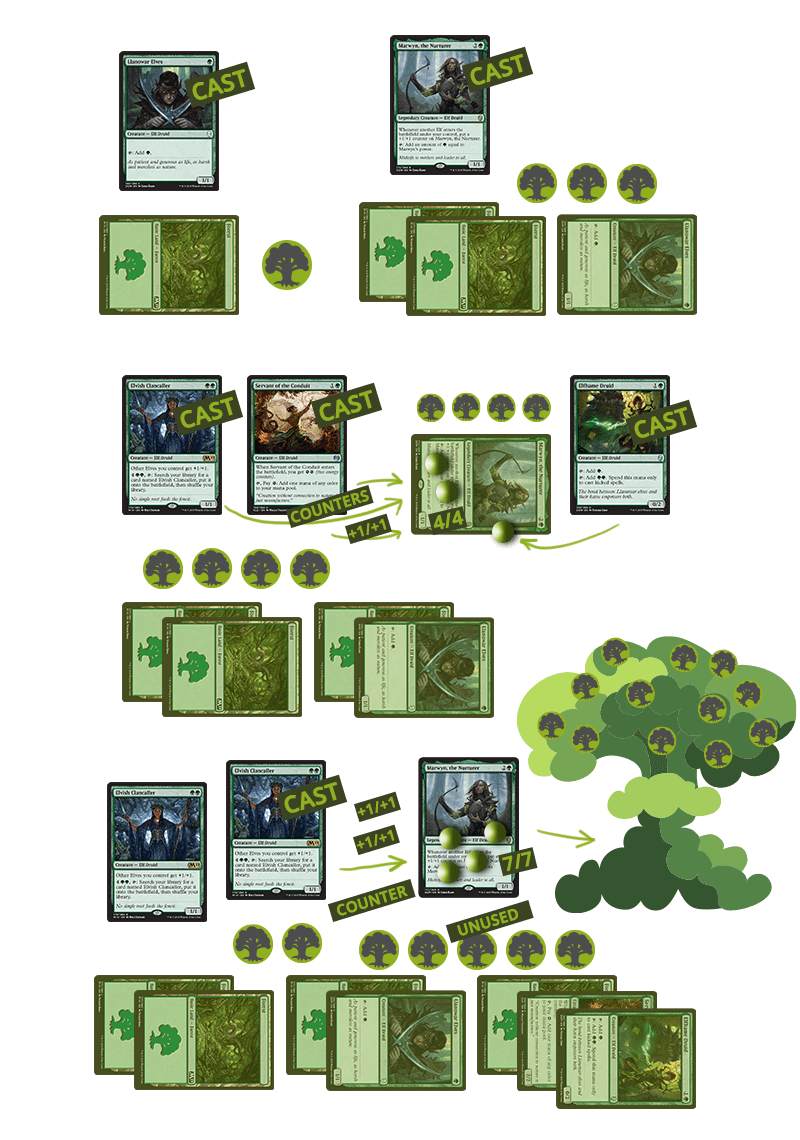 Elvish Clancaller and Marwyn are clearly part of one happy family. Each Elf you find with the Clancaller ups Marwyn's power and toughness by 2 and doesn't need to be drawn. The Clancallers tap to activate their ability, but the trick with Marwyn and the Clancallers will be the use of frighteningly effective untap effects:

So, in the example above, if on turn four you played another land then cast Rallying Roar using your mana creatures (with white mana from Servant of the Conduit), you'd give Marwyn +1 power and mana while also untapping your other three mana Elves (giving them each an extra power this turn as well). By balancing the order in which you tap your mana Elves and cast your spells around Rallying Roar, this gives you a net total of eighteen mana to play with that turn! You could summon another Clancaller, or maybe cast a card like Overcome and go for the win!

As it turns out, if the Elvish Clancaller's activated ability were any cheaper, it would be out of control. Being able to tutor up lords gets out of control quickly.

I've focused on the explosive possibility of the Clancaller, but just like Rebels before it, it has uses in more methodical play.

Since the first Clancaller lets you get all the others, and since they will pump each other and other Elves, you could utilize them in a deck with fewer Elves but with more controlling elements. The Clancaller can be used for inevitability. If you are using countermagic and board removal to keep your way clear, Clancallers can be used patiently, summoning up additional allies while leaving your mana free to respond to your opponent's actions. The Clancallers can even be supplemented by using Equipment such as Forebear's Blade. This blade is useful with these Elves since a) it provides vigilance, which leaves the Clancaller able to use its ability, and b) it will automatically equip itself to a creature when the currently equipped creature dies. You can respond to one Clancaller's death by summoning the next and having the Forebear's Blade equip, all at instant speed.

I have emphasized what I hope are less obvious usages and contexts for the card, but I would be failing my duties if I did not point out the simple pleasures of having yet another force multiplier effect for the Elf tribe. Elvish Clancaller joins this club:

A deck with Steel Leaf Champion, these cards, and Elvish Clancaller won't have much need or use for subtlety; it will be too busy crushing opponents under the heels of 8/7 Elf Knights.

The only finer detail here is that the Clancaller probably works best when you can cast it and use it very soon after. It means you likely want to cast the other force multipliers first most of the time.

I'm excited about the great abilities that the new Elf lord has. I'm brewing all sorts of crazy Elf decks in anticipation. But enough about me.

What type of Elf deck do you want to build with the Elvish Clancaller?