Everyone who plays Commander plays for their own reasons. You can enjoy casting Sol Ring on your first turn. You can enjoy the power of Counterspell and Cryptic Command. You can think Rampant Growth is the best spell ever.

You can even play them all in one deck.

Playing what you want—no matter what it is—makes Commander among the most popular ways to play Magic of all time. This year's Commander (2018 Edition) release leans into themes again, and one of the headlining commanders is one I was enchanted to see. Meet Kestia, the Cultivator: 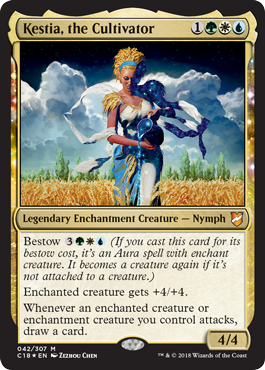 I can guarantee your opponents won't be as enchanted to see her as you.

When looking for a commander, legendary creatures can cover a range of themes. While some are carte blanche in what they encourage—like the mighty Yargle, Glutton of Urborg—most point in a specific direction—like Sai, Master Thopterist.

Kestia, the Cultivator is a giant neon arrow pointing to a runway with light for takeoff.

Kestia presents a complete list of things to consider for her deck, and they all work together to ensure you know how to make the most of her.

Theros block is full of enchantment creatures, which makes it a perfect place to find friends with whom Kestia can attack.

Courser of Kruphix and Kruphix, God of Horizons are powerful and popular Commander cards on their own, but in a deck where Kestia is the commander, you get her benefit too. Heliod, God of the Sun can make as many enchantment creatures as you can pay for, giving you an endless army with which to draw cards.

But Kestia is also happy if you want to enchant non-enchantment creatures and attack with them. Rancor and Cloak of Mists are powerful ways to ensure your attackers trigger Kestia's ability, while things like In Bolas's Clutches turn your opponents' creatures against them—and you still draw a card. Of course, Bear Umbra is a popular Aura simply because it can untap all your lands, which is useful for commanders like Kestia and beyond.

With Kestia, the Cultivator, you can mix and match both of these approaches—enchanting creatures and enchantment creatures—and still get the benefits of focusing on either. Attacking opponents is a pretty consistent way to win a game of Magic, and Kestia's ability will keep your hand full along the way.

But Kestia can do more—she counts herself in combat too. Bestow is a complicated mechanic, and how it works is a little strange:

Kestia, the Cultivator counts herself when she—or whatever she's enchanting—attacks. On an empty battlefield she promises a free card, and at four mana, she can come down early enough to swing before everyone is set up. Since her ability that cares about attacking creatures works both when she's a creature and when she's an Aura, you can bestow her power to turn on an entire army of card-drawing attacks once you've set it up.

Early or late, Kestia brings power to the game. And there's one more reason Kestia, the Cultivator is a well-lit path to a Commander deck: Kestia is in Bant—green, white, and blue—which gives you access to some of the game's best enchantment tools.

While Rhystic Study and Ghostly Prison aren't creatures or Auras, their effect on games is dramatic. Taxing opponents into giving you what you want—more cards, fewer attacks, etc.—gives Kestia the time to set up her attacks. Enchantments like Leyline of Anticipation or Mirari's Wake break fundamental symmetry in the game. Casting all of your spells like instants and getting twice as much mana out of your lands are advantages plenty of Commander decks want.

But alongside what will be one of the most powerful cards to pair with Kestia, Starfield of Nyx, you unlock a new dimension of opportunity. Getting back an enchantment every upkeep is already good, but suddenly turning Rhystic Study and Mirari's Wake into enchantment creatures ready to attack unlocks the full potential of Kestia.

Of course, we'll have to wait to see Kestia's complete deck before we know which ways to support her we'll start with—but Magic isn't lacking in ways to help enchantments play for the long game.

Whatever you like about enchantments, and however you want to use them, you'll find Kestia cultivating exactly what you need. Commander 2018 can't arrive soon enough!