When I was a kid, I was completely obsessed with dinosaurs.

I had dinosaur bedsheets. Dinosaur books. Dinosaur figures set up in my room to perform epic dino-battles.

My most-watched movie for years as a kid? The Land Before Time. The first movie to usurp it? Jurassic Park. The first story I ever wrote? Yeah, you had better believe it had dinosaurs.

My imaginary friend as a kid was a dinosaur.

It turns out I was far from alone. Many others my age had the same dino-laden childhood . . . and several of them got picked up by Magic R&D.

Hence, Ixalan. A place where Dinosaurs roam the world.

If there's one thing any dinosaur-loving kid knows, it's that you have to have a favorite dinosaur.

Many kids would choose the Tyrannosaurus Rex. Big and mighty, but more about brute strength. Not for me.

Especially after The Land Before Time, many would choose brontosaurus. A fine choice, certainly.

But my pick? The noble triceratops.

An herbivore, yes, but one that was steadfast and stood its ground. It wouldn't generally attack unless provoked—but if you tussled with a triceratops, you would incur its wrath. Enrage one, and prepare for a world of hurt.

If you've been following along with Ixalan so far, you might have spotted the enrage mechanic. This ability triggers whenever the creature takes damage.

Let's take a look at an already-previewed example: 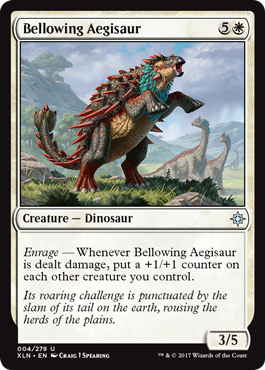 Here's a nice design to illustrate what I mean. If someone makes this creature angry—if it gets into combat or is lit on fire by a burn spell—you'll get to take advantage of it being enraged.

But what's the best way to make use of this mechanic? Let's talk about some of the possibilities.

One of the great things about enrage is that it puts your opponent in a tough space inside of combat.

Let's say you offer up a trade in combat. Both of your creatures are going to be destroyed, so that's generally a pretty neutral deal.

Except with enrage, now you're getting something a little extra as a bonus!

Let's take a look at a new enrage card. Here's a new, simple common you can expect to see across from you on Limited tables everywhere: 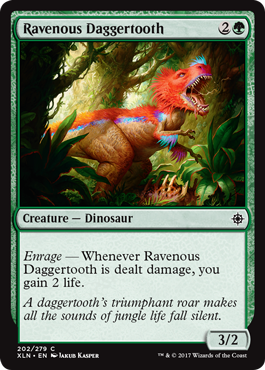 This Daggertooth has totally reasonable 3/2 stats for three—with the nice little bonus of picking up some life when it takes damage. Just the kind of thing I'm satisfied to have on turn three of my Limited curve.

Let's say you attack. If you're in a race, blocking this creature isn't an awesome proposition—but at the same time, your opponent certainly doesn't want to take the damage either.

Maybe you leave it back on defense. Does your opponent really want to trade with it there and put you up on life?

So maybe they do go to trade off the creatures . . . And that's when you slam down your pump spell!

Pump spells that increase your creatures' toughness are better than ever in a deck with enrage cards. Your opponent tries to make a trade or burn your enrage creature, and you pump your creature up. That not only lets your creature survive, but also means the enrage ability is likely to happen again on another turn!

In Ixalan Limited, you'll want to keep your eyes open for pump spells. There's a lot of creature combat going on—and if you're drafting Dinosaurs, they can really elevate your Dinosaur deck and make your enrage abilities shine.

Of course, your opponent isn't the only one enraging your Dinosaurs . . .

While the triceratops may have been my childhood favorite, today I'd say my favorite has been shifted to a certain popular two-legged dinosaur that sounds like it could be the name of some trendy exercise equipment. And I've even got two of them to preview next!

That's right: lock your doors tight because this next section lets out a pair of incredibly clever velociraptors.

It's one thing to put your opponent in control of your enraging. But some enrage cards really ask you to try and make your own Dinosaurs a little upset.

Ready to see a pretty exciting new card that potentially has Constructed applications? Here we go! 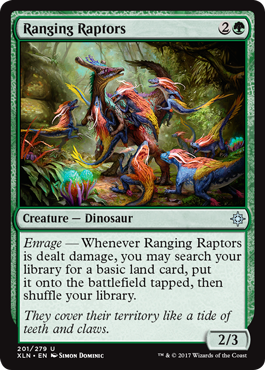 Ranging Raptors is okay if you're just throwing it into combat. It can trade off or, worst case, chump block and get a land in the process. If that happens, it's like a three-mana Rampant Growth that prevents you from losing some life. Not too shabby.

But where the card really shines is when you're the one who starts to enrage it!

Ixalan has plenty of cards that are good for pinging your own Dinosaurs and setting all of your enrage effects off. And even without knowing what those cards do specifically, this turns all your existing Shocks into mana acceleration!

If you play this on turn three, it would be pretty easy to set up to get two lands on the following turn (or more—keep in mind that you can try to trigger enrage on your opponent's turns also because the damage will have reset!). And as you're trying to set up to play some truly titanic Dinosaurs, that's a big boon.

And then there are some cards that go even further into the "enrage me" territory. 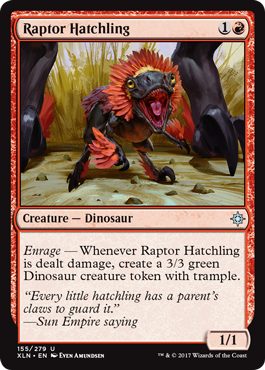 On its own, this is a two-mana 1/1 that (usually) dies into a 3/3. That's enough to consider in some Constructed decks alone!

But what about the combo potential?

There are some big dreams to live with this card! Pump it up with an Aura, +1/+1 counters, or another spell, then deal 1 damage to it a few times. Suddenly, 3/3 motherly Dinosaurs will come running in from everywhere and swarm the board.

Enrage is not only exciting because it's on solid creature bases, but also because of how you can combine it. It's time to start combing all your old cards for ones that can easily deal damage to your own creatures!

Despite My Enrage, I'm Still Just a Dino in a Cage

I love mechanics that change how you evaluate cards—and enrage has that in spades. Cards that plink your own creatures for damage are generally not things you want around . . . but with enrage, that changes significantly.

I hope you have a good time making your Dinosaurs mad in Ixalan! Have any other questions or comments? I'd love to hear from you! Please feel free to send me a tweet or a message on my Tumblr. I'd love to see what you think about enrage!

I'll be back next week to cover another Ixalan mechanic with a couple exciting new preview cards. Talk with you again then. Enjoy venturing into the wonderful world that is Ixalan!