What I love most about the annual Commander products is how often they lead us to try out something we never would have otherwise. Look at this year's slate; we're sure to see twists on enchantments-matter cards, not to mention an entire deck built around a theme as wide open as "lands"—I can't wait to see what's cooked up around that. But as exciting as those new things are, I must admit I'm always a fan of Magic tapping back into old design space.

Take miracles, for instance. Miracles, the signature mechanic of Avacyn Restored, were wildly fun during their run through Standard, and there can be no doubt they made for some extremely memorable play experiences.

Entreat the Angels and friends have gone on to be staples of the Commander format. I've certainly cast my share of Temporal Mastery, and Devastation Tide is a mainstay of many blue decks—not to mention the work Terminus does in a format where being tucked to the bottom of the library is a fate worse than death. But for all their glory, there's one thing miracles have never done. 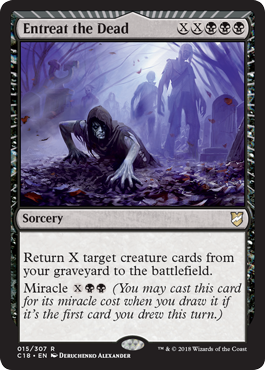 Speaking of Entreat welcome to black, miracles. Entreat the Dead is a dream come true for reanimator players everywhere. And in a format like Commander, who doesn't have at least a little bit of reanimation in their black deck?

Entreat the Dead is definitely going to find its way into a ton of Commander decks, but there are also a few ways to make the most of Entreat so it's more than just a card that sometimes accidentally wins you the game. Let's start at the top.

This, of course, is the most obvious and exciting part of the card. Getting Entreat the Dead off the top is going to create an insane turn basically every time after turn four or five. Of course, we can do a lot better than just playing the game and hoping to draw it off the top—everyone who plays miracles wants to make them just a little less, well, miraculous. So, what are the best ways to ensure you're going to draw Entreat the Dead exactly when you want to?

We can take a page out of the traditional effects used for miracles in other colors, namely Mystical Tutor and Sensei's Divining Top. Both have well-known pedigrees in the format, with Mystical Tutor teaming up with Temporal Mastery more times than I can count in my local group. Sensei's Divining Top, of course, is ubiquitous in the format, and its interaction with miracles is simply a nice bonus. You don't always have to manipulate the top of your deck—sometimes just knowing what's coming up is half the battle.

As "Subjective Reality"—the deck in which you'll find Entreat the Dead—is based in Esper colors (white-blue-black), here's a brief rundown of some cards you can use to help set up your miracles. Odds are you've forgotten about some of these or didn't even know they existed.

This is just scratching the surface, I'm sure (Personal Tutor is another overlooked card that fits here), but the point is clear: any deck playing Entreat the Dead has access to plenty of ways to set up the top of the deck for the miracle.

Planning for the Worst

I have good news: Entreat the Dead is never dead itself. Three black mana is a large upfront cost along with XX, but suppose you just need to fire it off to reanimate one creature. That will cost you five mana, exactly the same as Beacon of Unrest, which is a card that usually targets a creature in your own graveyard anyway. While that's certainly not how you plan to use Entreat the Dead, the fact that it is a solid backup plan isn't so bad.

And that's just the cheapest rate. As far as expensive sorceries go, Entreat the Dead actually scales fairly well—seven mana will get you two creatures and nine mana will net you three. In Commander, that's not just doable in a pinch, it's actually a reasonably powerful card on its own.

But of course that's not how we want to be playing Entreat. So what other options are there for the games where you have it in your hand? There's more good news, as plenty of cards will help put Entreat the Dead right back on top of your deck where you want it.

You better believe the color of Brainstorm isn't lacking for ways to put Entreat the Dead back into your deck. While Brainstorm and its many variants (Jace, the Mind Sculptor fits the bill) are pretty easy to figure out, Scroll Rack is a colorless way to not only reset the top of your library with cards from your hand, but do it selectively to improve your hand while you're at it.

Go ahead and read Conch Horn and Hidden Retreat; it's been a minute since Fallen Empires and Stronghold were released, so I don't blame you. Conch Horn is a one-shot effect, but a powerful one. When you know you have Entreat the Dead on top of your deck, it can sacrifice to allow you to cast the miracle at instant speed, but in games where it's stuck in your hand, you can crack the Horn on the end step of the player going before you and then put your Entreat the Dead back on top your library—exactly where you want it when you untap.

Hidden Retreat offers something even more unique: the ability to repeatedly set up miracles from your hand, for upside. One of the most enduring things about Magic is the ability to turn what looks like a downside into a positive, and Hidden Retreat does exactly that, allowing you to set up your miracles while also preventing damage from a big spell being pointed at you.

I've saved the best part of the card for last—the fact this is the first-ever black miracle! Thus far, we've talked about generic effects that will help to set up your Entreat the Dead in "Subjective Reality," but they've all been cards that have always played nicely with miracles. Now, for the first time, we have access to miracles in a brand-new color, and that means some tools to work with to set them up.

So, we have a miracle we want on top of our deck, and we want creatures in our graveyard for that miracle to resurrect? Insidious Dreams does it all. It provides a discard outlet for all the fatties in your hand, while tutoring for Entreat to send them all directly into play the very next turn—and you can even set up your draws after that! As a four-mana instant, Insidious Dreams curves perfectly into your fifth turn consisting of reanimating three giant creatures from your graveyard while you put whatever else you want on deck to be drawn the next turn.

There is so much to talk about with Entreat the Dead, and I'm sure we've only seen the tip of the iceberg with the tricks "Subjective Reality" has up its sleeves. I know innovative players out there are more than ready to welcome the first black miracle to Commander. I can't wait to see how this deck plays out its theme.

Until you get your hands on Commander (2018 Edition), may you keep your graveyard full and your miracles on top of your deck.