Some previews just sneak up on you. Modern Horizons offered us a unique opportunity to do things that we had wanted to do for a long time but couldn't quite find the right home for. One of the most popular things that players ask for time and again is Ninjas. Enter the Fallen Shinobi: 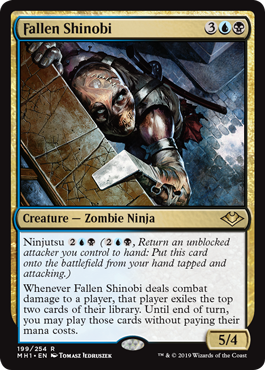 While Zombies are generally slow and shambling, I promise you don't want to let your guard down around this one.

Fallen Shinobi started as a reprint of Silent-Blade Oni in the early versions of the Modern Horizons file. But as we garnered feedback from members of R&D, we quickly realized that the world deserved new Ninjas. Additionally, it was a tall order to ask the Oni to see even a hint of Modern play. We wanted many of our reprints to have every chance of making their mark on the format they would be newly legal in.

As I highlighted in my Flusterstorm preview article, Modern Horizons has many goals. As an avenue for us to design cards without going through the Standard pipeline, we were able to carve out some space here to delight players by bringing back a beloved tribe. As this is a Modern-legal set, we took strides in making sure that the text box was strong enough that you would consider Fallen Shinobi for Modern tournament play. Connecting with one of these in combat will surely fell your opponent. Try returning an unblocked Snapcaster Mage for unprecedented value!

There are even more Ninjas lurking in the shadows of Modern Horizons. And I am not just referencing the many changelings in the set! Stay vigilant for more previews around the internet, some of which will certainly involve this stealthy squad.

I hope you're enjoying Modern Horizons previews as much as I am!