Today, I'll be previewing two Commander (2019 Edition) cards you'll find in the Jeskai (blue-red-white) deck, which emphasizes flashback, prowess, and noncreature spells. These cards support the themes in some intuitive and non-intuitive (but still fun) ways, and we'll look at those specific themes as well as how they can be used generally in your Commander decks.

Burning Down the House Again

You've been slinging instants and sorceries nonstop, drawing cards, burning down creatures and opponents left and right. Your opponents are biding their time . . . you must run out of steam eventually, right? That's what they think as your turn comes around and you have one card in hand. Too bad it's this monster: 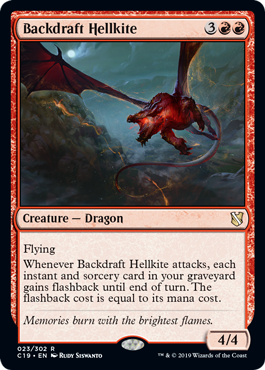 Tap to attack, then replay all the fun spells your opponents enjoyed so much the first time around!

Backdraft is certainly not the buffest or fastest Hellkite. Thundermaw Hellkite will take its lunch money every time. But Backdraft Hellkite's real job is simple: it's flashback on a big, charbroiled stick.

Giving all your instants and sorceries in the graveyard flashback is enough to make Snapcaster Mage give the stink-eye to the Dragon . . . or it would if it weren't for that one little detail:

Having to wait for an entire attack step is not quite "enters the battlefield" in terms of immediate gratification. In a multiplayer game, the chances of the Dragon living dwindle with each opponent's turn we experience.

It's clear that to get optimum use of Backdraft Hellkite, we'll have to get it to attack ASAP, which means we will want to give it haste. But that isn't all; the Hellkite isn't cheap at 3RR, and we need sorceries and instants in our graveyard already.

Meeting all these conditions to optimize Backdraft Hellkite might seem like too much, but the Hellkite is really going to shine when you have a lot of noncreature spells combined with a mix of creatures that profit from them.

Your opponents can't destroy all your creatures, and as they try to knock your other threats off the board, it gives you a chance to stick a Hellkite and make them pay for their crimes against your deck.

Before I cover the second card, I have to wonder: what is the term for a group of Hellkites?

A scorch of Hellkites? A burn?

I'm not sure, but random fact: as of this writing, there are 21 Hellkites in the game. While the average casting cost and number isn't enough to make an Elf- or Goblin-style tribal deck, toss in some clones and copy spells, a Sarkhan or two or three, and some anthem effects, and you've got a fun tribal subtheme in your deck.

The Future Looks Bright Because it's on Fire

I must admit, my favorite cards to preview are ones that unfold like little stories. We start with the beginning:

This is shaping up to be pretty good. I like this. Going to start brainstorming some ways to . . .

Wow. That's a plot twist, and a very good one. 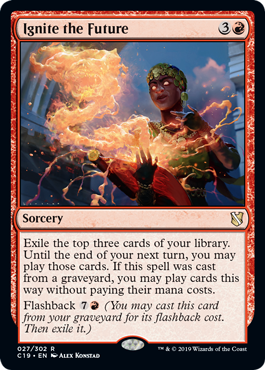 Ignite the Future is a decent spell when you cast it for 3R in the mid-game. Even without a lot of deck support, you'll stand a good chance at rolling into a couple of good hits for effect. You maximize your chances of getting value in this style if you keep your costs relatively low. This increases your chance of casting each spell you flip with Ignite the Future.

Later in the game, Ignite the Future is a powerhouse of a spell. Even though it has flashback of 7R, your potential to still get a discount on the spells cast is pretty high. The only problem is that each context you can cast the card in optimize toward different "sizes" and impacts of spells. Do you want to cast a lot of small spells to optimize your first cast, or play bigger spells to optimize your flashback cast?

Me, personally? I don't play Commander to cast small spells.

I want to go big or go home (or to my nearest Plane).

The more I looked at Ignite the Future, the more I realized I would be perfectly fine with not casting the card out of my hand ever, expecting to cast it out of my graveyard to get three potentially big spells from my deck and making a huge play.

Playing cards that let me pitch cards into the graveyard, and maybe some that get cards back into my deck (not really looking to hold a big spell in my hand unless I am ready to cast it, after all). Get some sweepers and countermagic to taste (which should be easy to find in Jeskai colors), then get ready to play a game of "Big Spell Surprise"!

Ignite the Future is a card I like because it is powerful but still a bit wild and hard to control.

Backdraft to the Future

What's interesting about Backdraft Hellkite and Ignite the Future is that they support common Jeskai themes, but from very interesting angles. That's a win-win for Commander players because it means that those cards will be useful in those specific decks but also fun and useful in your own concoctions.

What will you build with these cards when Commander (2019 Edition) is released August 23?