For all the Commander I've played in my life, I've almost never built a deck with the intention of it being aimed solely at winning as fast as possible. I've built around themes, around colors, around challenges from other players, and around legends I love—but I had never built a deck solely aimed at ending a game quickly

Until I met today's preview card: 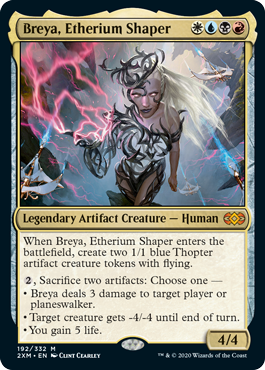 I've had artifact decks before—I still have a mono-red Daretti deck—but the appeal of cards from Shards of Alara (mostly in Esper), along with a handful of powerful red cards, pulled me toward Breya. I wanted to play all the things!

At least that's where it started.

When you have a four-color commander, the list of "all the things" can be very long. Once the excited Johnny in me gets their first draft done, the more serious Spike in me is typically in charge of making cuts. So, as I cut down on cards in Breya, it leaned more and more toward "doing broken things" and less toward "do all the artifact things you enjoy."

So I leaned into it.

You see, what makes Breya so interesting for going full Spike is that her abilities are generally fine—playing Breya to gain 5 life isn't going to scare anyone—but the fact that she creates two artifacts and provides a (sometimes clunky) sacrifice outlet are actually key to many of the artifact shenanigans that you can get up to.

The deck isn't fully tuned. I tend to only add cards when I get them rather than going out of my way to complete an "ideal" list, but the deck is certainly not weak. But here are some of the things you can do with a full-on Breya deck (list at the bottom of the article):

My primary win condition. It's easy to assemble with things like Goblin Engineer and Tribute Mage, and sometimes even gets overlooked by a high-powered table because it's very mana intensive on its own. However, combined with things that let you tap creatures for mana, it goes infinite.

And, of course, Urza himself goes infinite if you have infinite mana, which this deck has a few ways to produce.

Of course, you could always just take infinite turns. These two cards aren't infinite by themselves but are typically any number of cards away from being such (or a Thopter Assembly, which I'm not actually playing).

And, of course, if all else fails, you can just draw a ton of cards.

The deck can be complex and has much, much more to explore (Shimmer Dragon, Sphinx Summoner, Thopter Assembly, and Ashnod's Altar are all powerful options just outside my current list), but if you crack a Breya, Etherium Shaper come Double Masters, you could do worse than starting from here.

1 Sharuum the Hegemon 1 Open the Vaults