Today I get to preview a nice pair of cards for Masters 25, though they aren't exactly a combo. In fact, you could say they are mortal enemies, though they haven't appeared at the same time before this set. Let's take a look at the first one, a card I have very fond memories of. 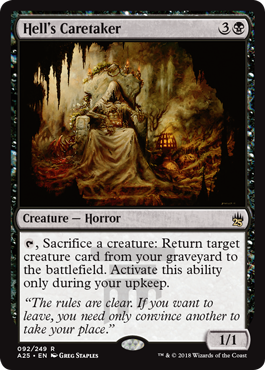 Before there was Recurring Nightmare, there was Hell's Caretaker. This card was first printed in Legends, which was a set that was just off the shelves when I started playing Magic. In fact, I recall saving up $10 to buy a Legends pack, but when I finally had enough money, I was told they just sold out. My local store never got more Legends, and to this day I've never opened a pack of the set, a set that captured my imagination. Hell's Caretaker was among the cards that fascinated me, and I've gotten to play with it numerous times since then. The ability is very powerful, even when restricted to use during your upkeep, as swapping two creatures lets you cheat big creatures into play, trigger death abilities, and trigger enters-the-battlefield abilities. That's a lot of action for zero mana per turn, and the list of uses for Hell's Caretaker is longer than I am able to type out.

I'd like to think that this card inspired Recurring Nightmare, since it likely did, and by the time Nightmare was printed there was enough support for this effect that it became a tournament-dominating card. While Hell's Caretaker is a little more vulnerable to removal than Recurring Nightmare, it's still an insanely powerful card, and one I anticipate picking highly in Masters 25 drafts. Making your best creatures unkillable and letting you cycle back value creatures over and over again sounds like hell for your opponent, and that's exactly the kind of game I enjoy playing. However, it's not all smooth sailing, as my next preview card puts a lot of this nonsense to rest. 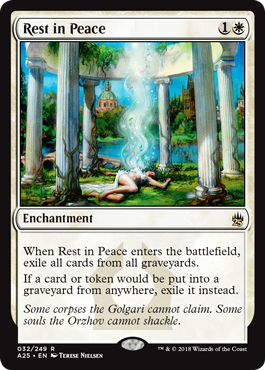 The nostalgia factor on this one isn't quite as high for me, but I've sure cast it a lot more. Rest in Peace is the graveyard hoser to end all graveyard hosers, as it really shuts all shenanigans down hard. It even crushes all the hopes and dreams of Tarmogoyf, which very few graveyard cards actually do, and it makes any sort of reanimation strategy very tough to pull off. Even if this is removed, it still has a powerful effect when it enters the battlefield, and while it's in play, both players are forced to play good, clean Magic. I can only assume that this was put into Masters 25 as a reaction to the overpowered Hell's Caretaker meta, and that's why I get to preview both cards at once.

I do have a funny, and more recent, anecdote about Rest in Peace. Multiple times, I've seen Modern matches where both players have Rest in Peace in their deck post-sideboard. The match where I saw this last was Jeskai Control against White-Blue Control, and presumably both players were looking to hose opposing Snapcaster Mages and/or Search for Azcantas. I highly doubt either player should have boarded it in, but them both doing so is just the right amount of absurdity. I don't know what happened in the next game, but I like to imagine that they doubled down and both kept Rest in Peace in.

So, there we have it. An awesome (and enchanting) Limited card that will lead to a lot of action, and a powerful (and enchantment) sideboard staple that will continue to see Constructed play. These cards hit a nice mix of nostalgia and power, and I look forward to seeing them both, albeit for different reasons. For the record, Hell's Caretaker still wins the head-to-head, since it gets to attack for 1. Take that, graveyard hate.