Do you remember the concept of "un-birthdays"? It's an idea dreamed up by author Lewis Carroll in Through the Looking-Glass and sung about in the 1951 animated film Alice in Wonderland. It's an event celebrated on the 364 days of the year that specifically aren't your actual birthday.

And with a new Un- set coming out, I think it's fair to say that it's all of our un-birthdays.

Full disclosure: I've never actually played with an Un- set before, so I'm extra-super-mega excited to throw down with Unstable when it hits stores next month. This set promises to have everything I could ever want: ridiculous new mechanics, fun synergies designed specifically for Draft, and SQUIRRELS!

However, I've come here today not to preview a mind-breakingly amazing Squirrel card (trust me, they exist!), but to share a shiny new Unstable synergy that is sure to make for some incredible games.

First, let me ask you this question: Do you know what a watermark on a Magic card is? It's the semitransparent marking that is sometimes printed behind the rules text of a card. You might remember seeing them denoting your favorite guilds in Return to Ravnica, the clans from Khans of Tarkir, famous Phyrexian cards, or on some of your promos. 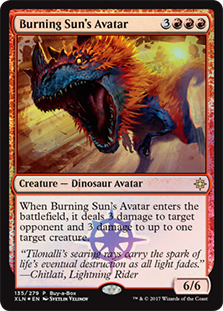 In Unstable, watermarks matter! Let's take a look at a card that rewards you for playing with cards that have the same watermark. 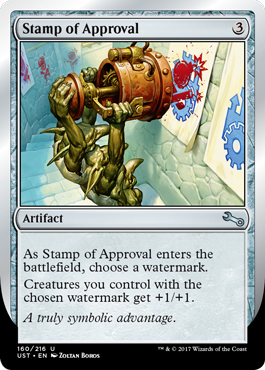 I love Anthem-style effects, so I really dig this card. Whatever you do, do not underestimate its power in a properly constructed deck. If you're able to assemble a single-faction team, it can give most or all of your creatures a big bonus at the cost of just a single card.

Each of the five factions in Unstable has its own watermark. What are those watermarks? So glad you asked!

Want an example of a card from Unstable with a watermark? I thought you might! 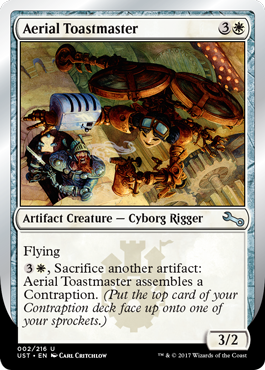 This card is not only awesome because it's just plain good in Limited (a 3/2 flier for four that has the ability to assemble Contraptions? Sign me up!), but also because it has that all-important faction watermark. Aerial Toastmaster is part of the Order of the Widget—a faction that's all about gadgets, circuitry, and soldering, probably. If you named Order of the Widget when Stamp of Approval hit the battlefield, this would be a whopping 4/3 flier for four mana. You don't need to be a Pro Tour Champion to know those are some excellent stats.

I'm excited to see how highly a card like Stamp of Approval will be picked in Draft, since it enables you to build a synergistic deck full of a single faction with buffed power and toughness. It'll also make for some interesting decisions if you find yourself with a multi-faction deck.

The more savvy among you may be starting to think of how cards like Stamp of Approval can be used outside of simply drafting Unstable. That's because Un- sets have a history of being included in special formats. If you slip a card like this into your cube or your Commander deck, it'll care about any cards from Magic's history that have watermarks. That means super powerful cards like Elesh Norn or Deranged Hermit, which are Cube staples and have appeared as fancy judge foils or Friday Night Magic promo versions (giving them a splashy watermark), are 100% fair game. It's also important to point out that the faction symbols in the bottom right corner of the Contraptions are also considered watermarks. 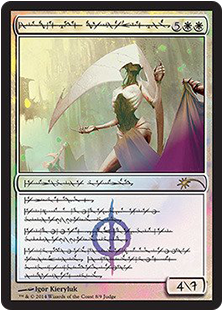 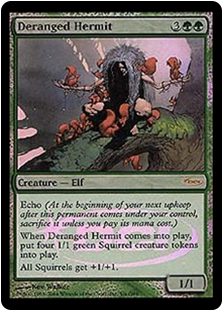 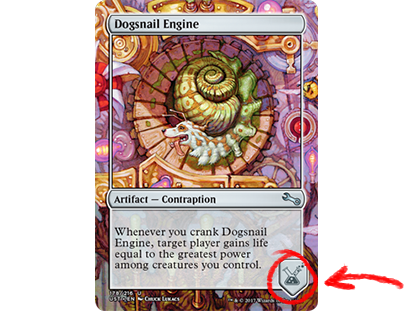 You may be saying to yourself, "But Maria, I don't care about +1/+1 on creatures in my cube. I want to make my sweet, shiny judge foil of Armageddon cheaper because I'm a filthy degenerate!" Don't worry, Unstable has got your back. 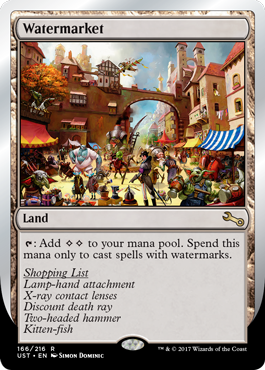 Here you go! Watermarket will make paying for your cards with watermarks much easier. It doesn't even care what the watermark is! As long as a card has a watermark of some kind, Watermarket gives you a steep discount. It should go without saying that this card is absurdly powerful. Eldrazi Temple, anyone?

It's also worth noting the flavor text on this gem of a card. Kitten-fish on the shopping list? I sure hope someone's buying a pet and not dinner.

Making watermarks matter is a really cool new mechanic in Unstable because it plays with not only cards from its own set, but cards all across Magic's history. Take a search through your collection and find out which ones might be fun to pair with some of this new silver-bordered goodness.