Planeswalkers are a vital part of determining the flavor of a set. Powerful planeswalkers supplement the themes of the set while being independently useful and functional. Planeswalkers impact the game by providing effects that few other cards give, turn after turn.

The independence of planeswalkers makes them ideal topdecks. If you have a beneficial board state, life is going to be great! But even if you don't, you expect to cast a planeswalker and have it stand on its own.

For example, Ixalan gave us Jace, Cunning Castaway, Vraska, Relic Seeker, and Huatli, Warrior Poet. Each of these planeswalkers can build a board presence when they enter the battlefield and has an ability that interacts or synergizes with creatures.

What about a planeswalker that's mostly synergy? A planeswalker that is only fully effective in the presence of other cards? Rivals of Ixalan shows us what that looks like with another version of Huatli: 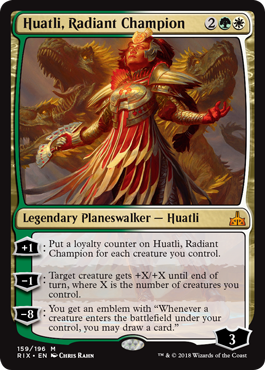 Huatli, Radiant Champion depends on you having creatures to use each of its abilities! While it can raise its loyalty by at least 1 without a creature under your control, you won't maximize the ability with an empty board.

Huatli's -1 ability is also heavily creature dependent, granting a creature a bonus to power and toughness equal to the number of creatures you have.

Huatli's last ability is a no-cost, better-than-Lifecrafter's Bestiary effect that draws you cards when your creatures enter the battlefield.

All of Huatli, Radiant Champion's abilities require creatures to work, making the planeswalker highly reliant on other cards to function. While this can seem like a weakness, I think it more appropriately forces us to ask a question: What is the payoff for making a suitable environment for this card? Synergy works when the payoffs are consistent or strong enough.

With a Little Help from My Friends

Whenever I see a +X/+X effect like the one in Huatli's -1 ability, my first thought is always "How do I maximize X?" It's a logical place to go if you can control how much X you have. Even Huatli's +1 ability is implicitly an "X" effect (really, "X + 1").

Huatli's upper end is pretty clear: more creatures means bigger pumps and a tougher planeswalker. It's easy to imagine ten creatures on a board, casting Huatli, pumping it to 14 loyalty, then pumping one creature for +10/+10 every turn.

I want to address that, but first I want to address how Huatli looks when everything isn't clearly advantageous. You need to see what a card looks like when things aren't so great to see its full context.

Looking at Huatli's lowest end means looking at what it is like with no creatures. This is less interesting, because we already acknowledged that without creatures the planeswalker will not do what you want.

What I want our lower end to be instead is what Huatli, Radiant Champion looks like when X is small. If I only have a small number of creatures out, is Huatli worth it? What is the payoff of "X = 1" or "X = 2"?

We can look at a few creatures that can be cast on turns one through three, before Huatli, and see what even a small bonus looks like.

Each of these cards benefits substantially from even a modest +1 or +2 bonus. A Sacred Cat getting powered up to 2 or 3 becomes a nice source of life gain, while double strikers like Imperial Lancer and Adorned Pouncer effectively double each point of power they get. Drover of the Mighty with just one other Dinosaur can become a 5/5 monster every turn. Longtusk Cub becomes even more aggressive as it goes on an energy-fueled rampage. Lastly, Adanto Vanguard can be a handful, doing 4 or 5 damage each turn while you trade life to make it indestructible.

If you don't use Huatli's +1 ability, you get three turns of pump. One use of the ability with a creature on board gives you five pumps. Over that span, chances are you'll play more creatures and get bigger +X/+X increases.

Another realistic role for Huatli, Radiant Champion is as a card to break through stalemates on the board. In a battle between two creature-based decks, it is common that both decks have a large mass of creatures with no profitable attacks to make. In these situations, what you want is a card that consistently gives you enough edge that you can erode your opponent's board state while preserving yours as much as possible.

Huatli on the board can help you push through stalemates. First you use the +1 ability, giving it a lot of loyalty to make it resilient enough to not need protection if opponents want to attack it. From there, you either play to Huatli's "ultimate" -8 ability or use the -1 to create big attacks every turn to overwhelm your opponent's defenses.

Playing to the ultimate means you cast and create as many creatures as you can and draw cards until you drown your opponent in card advantage.

If you use the pump, you can just send one huge creature in every turn that your opponent must block, and must commit many resources to keep at bay. With Huatli backing up a card like Carnage Tyrant or Bristling Hydra, your opponent will have a very difficult time avoiding damage.

Now, I want to talk about making a big "X," which means creating creatures instead of casting creatures. There are many ways to create tokens in standard:

It's worth noting again that all of the Ixalan planeswalkers create tokens, and that Huatli, Warrior Poet plays very, very well with her Radiant Champion self, creating tokens that can be pumped and later gain lots of life.

Generating tokens and making large boards is where I think Huatli, Radiant Champion truly, uh, shines (I'll see myself out). As we discussed before, giving a creature +10/+10 every turn is not a trivial thing. Drawing a card every time a creature enters the battlefield under your control (not just when you cast them, like Lifecrafter's Bestiary) gives a token deck the tools to recover very quickly after board sweepers and outpace controlling decks.

If you blend some early aggressive creatures with midgame token creation backed up by Huatli, Radiant Champion, that could be a potent mix to take on some of the big players in the current Standard metagame.

Huatli is a very interesting planeswalker design to me because of its synergy-first nature, but I think that the rewards of this design offer some substantial payouts that mean it will find a role in Standard going forward. There are old shells that it might find use in, and almost-there strategies like Mono-White Vampires and Green-White Aggro that can benefit greatly. I'm excited to see how the Rivals of Ixalan Standard season shapes up, and what role Huatli, Radiant Champion will play.

You can explore the power of Huatli, Radiant Champion along with the rest of the new cards in Rivals of Ixalan when Prerelease events begin January 13!