This one's for the grinders.

No, I'm not talking about people who make gourmet coffee or attend Grand Prix after Grand Prix trying to make a break for the Pro Tour.

Although, now that I think about it, both of those kinds of people might enjoy this card. 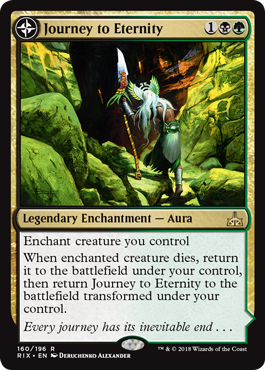 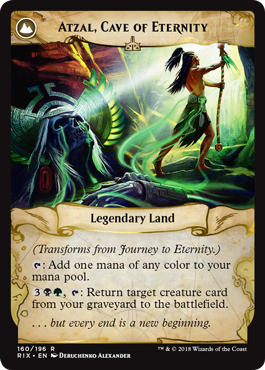 This card is begging to be built around. The first time I saw it, the deck brewer inside me began to mentally dig through all the cards I knew in Standard. What broken things could I do? What could I reanimate? How could I make sure Journey to Eternity flipped? Visions of monsters being brought back from the graveyard danced in my head. It was like a very disturbing "'Twas the Night Before Christmas."

This card can be good in Limited, but it does need a bit of support. It does nothing the turn it comes down, and we've been taught to be wary of such effects. And we should be! But keep in mind that even though this card doesn't give your creature a power or toughness boost, grant flying, or bestow other flashy abilities, it does give you a certain kind of inevitability. It essentially pulls down its hat, looks over its sunglasses, and asks your opponent, "Do you want to kill my creature or let it live forever?"

And that's a pretty nice spot for you to be.

Once you're able to flip Journey to Eternity into Atzal, Cave of Eternity, you're sitting pretty. The power to recur creatures from your graveyard cannot be overstated. As soon as you've amassed an army that can never really die, what can your opponent do? Not to mention, it also ramps your mana! 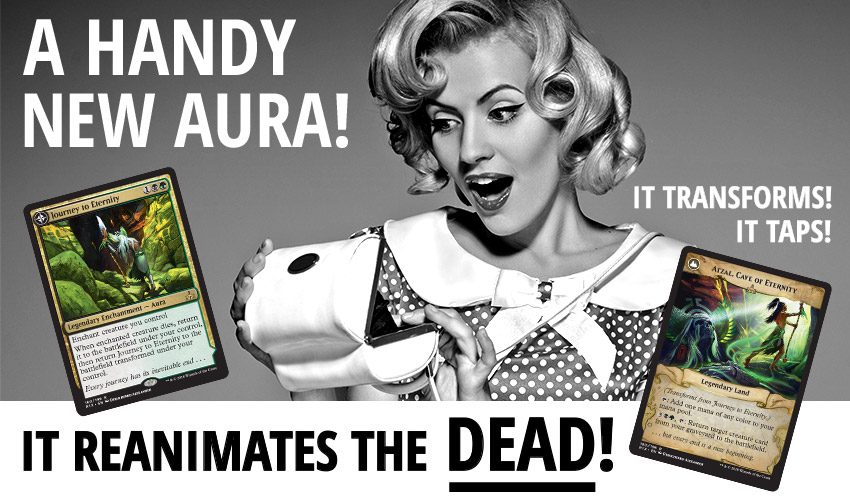 It's important to note that because this card lends itself to a long game and cumulative advantage, you should build your deck around it appropriately. That means making sure you play creatures and spells that allow you to survive long enough to be able to flip this card. You're not looking to swing in for massive amounts of damage turn after turn. You're also not looking to counter spells from your opponent or play big Walls. You're looking to play solid creatures on curve and be able to deal with anything problematic that hits the battlefield opposite you.

You should include sacrifice outlets if possible, and—if you're feeling extra spicy—some ways to discard your own bombs.

This is probably where I should fully admit that I love to play reanimation strategies in Magic. If I'm drafting a cube, chances are that I'm drafting reanimator. There's no feeling like playing a Swamp, Entomb, Reanimate. Hello, Griselbrand! It's so nice to see you on the battlefield on turn two!

While we can't do anything that busted in Standard right now (thank Heliod), we can try and cheat some giant creatures into play sooner than they should be able to be cast and endlessly recur our dudes after they've died.

Just like in Limited, there are a couple of things that need to fall into place to help this card find its way to the caves of Atzal. First, you need some way to be able to kill or sacrifice your own creatures. Counting on your opponent to do that for you doesn't always pan out. Second, you need to find a way to get some amazing creatures into your yard.

I decided to put on my brewing hat and take a crack at crafting a deck centered around Journey to Eternity. Keep in mind, this isn't a fully fleshed out deck, just a starting point. Most of the cards from Rivals of Ixalan aren't known yet, so there is likely some stuff in there that could make this overall idea even better.

4 Servant of the Conduit 1 Arborback Stomper

4 Servant of the Conduit 4 Glint-Sleeve Siphoner

The deck works like this: You play out your Glint-Sleeve Siphoner on turn two. On turn three, suit it up with Journey to Eternity. Turn four, Banewhip Punisher comes down and does what it does best—sends your creature to the graveyard, flipping your Journey and ramping your mana.

Yahenni, Undying Partisan also helps sacrifice your creatures for the greater good (while becoming indestructible), and Champion of Wits sends your giant monsters like Razaketh, the Foulblooded or Noxious Gearhulk straight to the bin. Liliana, Death's Majesty is another way to reanimate, while Arborback Stomper gains you life repeatedly.

This is just one of many ways to build off this card. You could also go all-in on reanimation and make a hard turn into blue-black, using cards like Chart a Course to throw creatures into the yard. You could even run off-color bombs or consider red, which gives you access to Cathartic Reunion and excellent removal.

No matter how you end up building with this card, one thing's for certain: your deck will be sweet. If any ideas pop into your head, I'd love to hear them! Shoot me a tweet @MissMariapants, and get ready to head straight to value town when Rivals of Ixalan Prereleases start on January 13!