Lands Are a Blast

Many people have a favorite card type in Magic.

Some like planeswalkers—and, well, then War of the Spark is the right place for you! Can't go too wrong with these folks.

Some tricky people love instants and sorceries and the decks engendered by going heavy on those. Storm has always been a favorite of mine, too!

And I'm sure there's even a tribal supertype enthusiast out there somewhere. (You know who you are.)

But me? I love lands.

You can play one every turn. They help you cast your spells. They are the backbone of deck building. You really can't play Magic without them. (Okay Manaless Dredge person, you can sit down now.)

What's not to love?

In the days before I became a Wizard, back on the competitive scene, I became known for playing more lands in my decks than other people. I would write about how I would always just add a land to every deck. There was even a meme made about me telling people to play more lands!

Years later, it's good to see that the new generation is still picking up this mantle. (For example, Emma Handy wrote a great article about this you should all check out.)

But besides just the fact that lands help you cast spells, I particularly love nonbasic lands that do something a little extra.

These cards are a bit of secret sauce in deck building, hidden split cards that do so, so much for your game.

How? Why? What is a new hot one with War of the Spark?

Let's dig into all that a bit today!

A looming specter over every game of Magic is whether players will draw the right mix of lands and spells.

In the competitive Magic scene, you're always looking for ways to mitigate that problem. It's a tough nut to crack, and as hard as it is, some number of games will always come down to mana trouble. But you want to reduce that as low as possible.

And that's where nonbasics come in.

If you draw too many lands, it can still be okay if your lands help function as spells. The Memorial cycle from Dominaria is a great example: many of them can be sacrificed for things you need when you're heavy on lands—either more creatures or just straight up more cards.

What does this mean? Well, if you play an extra land or two in your deck, but you have a number of Memorials in your deck, that means flooding out on lands is nowhere near as problematic. You can try adding one or two Memorials into your deck as additional lands to help steel yourself against mana trouble.

Of course, all logic breaks down if taken too far—a deck of 60 lands all with abilities probably isn't going to cut it—but as a small upgrade to a deck it can make a big difference.

Smoothing your draws is most relevant early in the game to find that mix of lands and spells. But another huge component of these lands is what they do in the late game.

A huge component of Magic is essentially virtual card advantage—trying to make sure you have more active cards than your opponents. You want to have the last threat standing, and plenty of late-game action. If the game goes long and you're both in a topdeck war, you want to be the person with more gas left in the tank.

Lands are also great for that.

A classic example to me are creature lands. You saw one of these earlier in War of the Spark previews in Mobilized District: 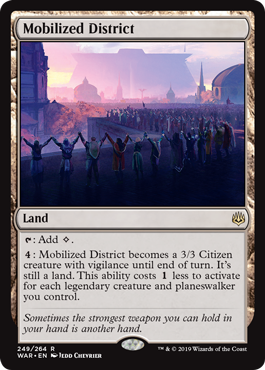 If the game goes long and you're both in a topdeck battle, having a bonus 3/3 or two among your lands can be the entire difference between winning and losing. You do give up a colored mana source, so you have to be very careful not to overload your deck on colorless lands—especially if you're trying to play three or more colors—but you should always keep these kinds of cards in mind.

This is also often while you'll see one or two Arch of Orazca hanging out in Standard decks.

You don't need a lot of cards like Arch, but if you draw one and the game goes long, you will radically outdraw—and likely outpower—your opponent.

Sacrifice lands like the Memorials still work well for this, too, they're just slightly less effective since they aren't permanent-repeated bonuses like these are. And which ones you want where will vary from deck to deck. In any case, playing the correct additional lands can help smooth out your early game draws and help you win the long game.

Lands that deal with your opponent's threats can be quite potent. Especially in control decks, which want a lot of lands already, giving them access to additional spells is a big deal.

We don't make a lot of them. And we really don't make many that can deal with multiple permanents across different types.

But, as you've been paying attention to previews, you'll probably have noticed War of the Spark breaks a lot of what we normally do.

We wanted to make some strong colorless lands in War of the Spark. There were a couple reasons.

For one, it was a great chance to show off war tropes and flavor. There are plenty of interesting events and changes happening across Ravnica, and cards like the Emergence Zone show that off well, too.

For another, it helps give power to decks of fewer colors: we expected the three-plus-color decks to be pretty strong after two sets full of dual lands and multicolored cards, and War of the Spark is full of more juice for those decks. Colorless lands are tools that can be risky to play in three-plus-color decks, but fit very well into one- and two-color decks and help provide a bit of extra gas.

So, we started looking into the well of what these lands could do. We liked the idea of a land that had counters so it could play well with proliferate. And that's when we started thinking about two classic artifacts in a similar space, which definitely fit that war feeling:

But that would be ridiculous to put on a land, right?

Well, I guess you'll have to play with it and see for yourselves! Check out Blast Zone: 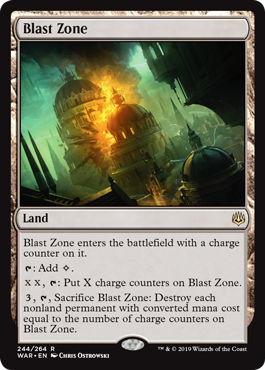 It's an untapped land that can remove all types of nonland permanents and catch multiple types at once!? Yeah. We made that.

A really big part here as well is that it doesn't just nab creatures. In a world full of planeswalkers, having a land that can clear them off is pretty tremendous. You can still proliferate it up, of course. And it even starts with a counter on it, so you can blow up all their one-drops out of nowhere! (Notably, it starts with a counter to not make clearing all tokens—such as Army tokens—too easy though there are still some ways in the set to get that counter off, if you're clever!)

As a land, it's pretty low-cost to include in your decks—and I'd expect to see a good number of these show up in your Standard decks. Not to mention, it hits every players' board, so Commander players in need of a bit of extra board clearing (perhaps even on two mana to get rid of all your opponent's mana rocks?) will want to keep an eye on this one too.

This is a prime example of a land you can slot into your decks to help smooth you out early, give you a little extra action if you end up flooded on lands, and also be relevant in the late game. It hits the trifecta, everything I'm always looking for. Hopefully you'll enjoy it as much as I do!

In a set full of flashy planeswalkers, creatures, and spells, there's plenty here for those fans of new nonbasic lands too. And regardless of your favorite card type, I hope now you appreciate lands just a little more. Maybe Blast Zone will be the beginning of your love for lands!

I guess it turns out War of the Spark really is a blast.

War of the Spark means a lot to us at Wizards and really shows off the culmination of a ton of work. I've been following along with your reactions all preview season, and it looks like you're all enjoying it so far—and I really can't wait to see what you think when you get to play with the set. It's really unlike any other set we've ever made.

Have feedback you want to let us know about? Send it my way! You can hit me up by sending me a tweet, asking a question on Tumblr, messaging me on Instagram, or sending a good ol' email. I'm excited to see what you all think!

Enjoy the last bit of previews, and I hope your deck building goes well. And remember: play more lands.