If greed is good, then wrath must be great.

And when I talk about "wrath," I don't mean the epic rage you want to unleash when you draw an all-land hand, lose the die roll every single match at a Grand Prix, or when you step on a LEGO. I'm talking about destroying all the creatures on the battlefield.

When you're the one doing the destroying, it can feel pretty great.

Wraths come in many forms in Magic. The classic example is, of course, Wrath of God—which is where we get the term "wrath" in the first place. Damnation is another example of premium wipe-the-board, pack-'em-up creature destruction. You'll see Supreme Verdict at Modern tournaments, Toxic Deluge in Legacy, and Bontu's Last Reckoning or Fumigate in Standard. Duneblast clears the way for your best attacker by destroying your opponent's team. Wakening Sun's Avatar is a non-dino wrath attached to a giant creature. Whirlwind only goes after fliers, and Terminus tucks creatures in at the bottom of their libraries so they can get a good night's sleep.

These examples all range in cost from three to seven mana and have various drawbacks or bonuses. For example: Fumigate is fairly expensive at five mana, but it gains you 1 life for every creature that dies. Toxic Deluge is an insane bargain at three mana, but requires you to pay life as a casting cost. Duneblast can be an all-star, but the seven-mana cost across three colors can be difficult to cast. You'll also see a steep price on Terminus, unless, of course, you're granted a miracle. Wrath of God and Damnation have no drawbacks at four mana—but we don't exactly expect to see effects like this printed much anymore because of how absurdly powerful they would be in any given format.

But come a little closer I have a secret to for you.

What if told you I could give you a wrath that only cost three mana and, if set up correctly, was very likely to have no drawback whatsoever?

I bet you'd be into that. 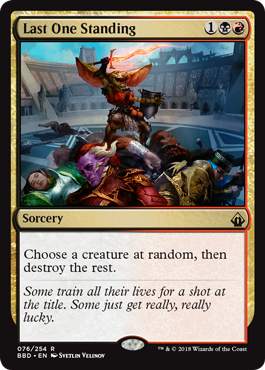 Take a look at this! Last One Standing is coming your way with the release of Battlebond, a set made exclusively for Two-Headed Giant.

"But," you say with trepidation, "this card says to choose a creature at random, then destroy the rest. How can I possibly make this advantageous to myself or my teammate? It's random, for crying out loud!"

First of all, great question. Second, that's exactly where the joy in this card lies: building a deck or setting up a board state that overwhelmingly favors you or your teammate.

We're not exactly used to seeing the word "random" on Magic cards, so it may be a little difficult to tell how to make the odds tilt in your favor. But just because it's random doesn't mean it has a big drawback. Think about how the cards Goblin Lore or Burning Inquiry are used in the Modern Hollow One deck. They're both nuts because the deck has been crafted to take advantage of random discard. And that's exactly what we're going to do here.

Battlebond is a multiplayer format, so we have both our creatures and our partner's creatures to consider when endeavoring to make one of them the Last One Standing. The most obvious way to take advantage of this is to drum roll, please have more creatures in play than your opponents. How do you do that? Think token creators, going hard on creatures across your two decks, or strategies that involve playing out a bunch of creatures and then backing them up with protection from removal or combat tricks to keep your dudes in play while killing off your opponents'.

The really awesome thing is that if you draft Battlebond and pick this card early with your partner, you'll both be able to build your decks around this epic, low-cost wrath. I can't wait!

Another way to use this card is to have very few creatures in your deck if you're into that kinda thing. You could use Last One Standing as a three-mana wrath, pack plenty of ways to deal with the one creature left behind, and then sit back, relax, draw some cards, and gain full control of the game. Classic.

It goes without saying that this card is very exciting in Commander, too. Commander games can get complicated with lots of creatures gumming up the board. Look, we've all been there. We know how it feels. Well, what better way to clear things up than with Last One Standing? It has especially interesting implications in decks that are very good at making creatures (or give you bonuses for making lots of creatures) with commanders like Purphoros, God of the Forge.

Whichever way you choose to use Last One Standing, it'll be great. Even if you aren't able to spare a creature on your team, you can't say you didn't do something epic. So, get out there and build some decks that take advantage of this card's unique, random nature. And may your battles be triumphant!