A Look into Standard Mana Bases

Hello everyone and welcome back to Play Design. This week I'm going to be talking about Standard mana bases and our philosophy behind them. Why talk about this now? Dominaria previews are underway, and today I'm going to show you five dual lands that will form the backbone of many Standard decks for the next two years. Here are the enemy colored buddy lands. 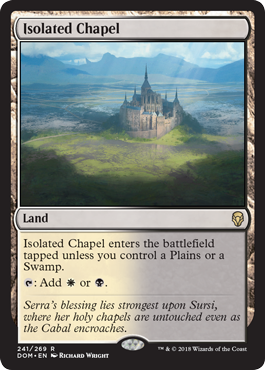 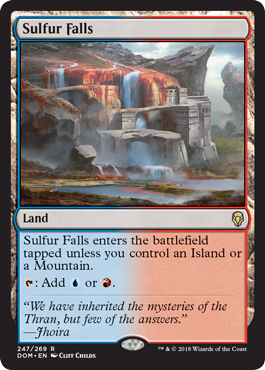 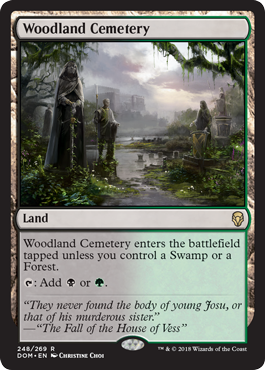 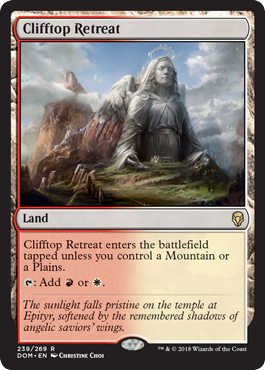 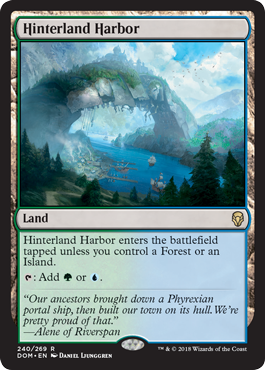 It's important for Standard to have strong dual lands. Having good mana fixing increases deck diversity and gives players options. Without them, players would be incentivized to play monocolored decks and not branch out into other colors in order to reduce variance in their draws. That makes Standard less fun overall.

Monocolored decks have a unique quality in that they have a "perfect" mana base. A mono-red deck only needs to run basic Mountains, so you won't run into problems such as drawing the wrong lands, having too many lands that enter the battlefield tapped, and being unable to cast your spells. However, playing only one color in your deck does come with a cost—you only have access to one piece of the color pie. If you need to kill large creatures or enchantments, you're going to have a hard time doing that if you're only playing red. If your deck is mono-green, you lose access to unconditional removal spells. Each color has its own strengths and weaknesses and the more colors you play in your deck, the more tools you have access to. This is one reason why we have dual lands in Magic. If you have lands that produce more than one color of mana, your deck becomes much more versatile. However, running more than one color in your deck comes with a cost as well.

If your red-green deck had a mana base of twelve Forests and twelve Mountains, you're going to run into situations where you won't have the right lands at the right times. If you replace four Mountains with four Sheltered Thickets and four Forests with four Rootbound Crags, you're going to run into that problem much less frequently. However, these nonbasic lands do come with a drawback. Sometimes you will need that fourth land and draw a Sheltered Thicket, and it will enter tapped and you will fall very behind. Or you'll get the all–Rootbound Crag draw and have a very slow start. That downside is minimal when playing these lands gives you access to more cards than a mono-red or mono-green deck would.

In Standard, ideally we would like there to be two different dual land options for each color pair. With Dominaria, we have a complete mana base with 20 duals: enemy color buddy lands, enemy color fast lands, allied color buddy lands, and allied color cycle lands. Having two lands per color pair gives players a variety of choice. Players can play two-color decks and play eight dual lands, or they can branch out into three or more colors and have options of which dual lands they prefer depending on the speed of their deck.

The Play Design team is mindful of which types of dual lands are slotted into the Standard environment at which times. The types of dual lands present in a format will determine what types of decks you see. For example, Llanowar Elves is in Dominaria, and it's a very strong card to cast on turn one. However, if you're playing a red-green deck, you're going to have a hard time accomplishing that task. Both of the red-green duals enter the battlefield tapped on turn one, making it only possible for a turn-one Elf with basic Forests. If you're playing black-green or blue-green, Llanowar Elves decks have stronger mana. Blooming Marsh and Botanical Sanctum enter untapped on turn one, making the turn-one Elf more consistent. I'm willing to bet that we'll see more enemy color Elf decks than ally color Elf decks performing well at high levels.

Having a mix of lands that enter tapped and untapped give players options of what kinds of speeds they can play. Once you branch out into three colors, you have more choices in your mana bases. A player who wants a Sultai (black-green-blue) deck, for example, can play Blooming Marsh and Botanical Sanctum if they want to take a more aggressive approach. They can play their duals early to cast cheaper spells, but they will enter tapped later. If the Sultai player wanted to take a more controlling approach, they could play more copies of Woodland Cemetery, Hinterland Harbor, and Fetid Pools. Their lands will enter tapped to start, but they will have more options for lands that enter untapped later. The bottom line is that if you are playing three colors, you have access to a wider selection of the color pie and should pay a price in some way with your mana base.

What if you want to play more than three colors? That should be much harder to do, but still possible. We make lands such as Unclaimed Territory, Aether Hub, and Spire of Industry that add any color of mana, but the drawback is that your deck must be built in a certain way, usually playing into the set's themes.

Completing the cycle of buddy lands with Dominaria gives players more options to branch out into more colors in their decks. Tribal decks didn't have very strong mana and leaned heavily on Unclaimed Territory. This meant that they had to play more creatures of their tribe than spells, because they couldn't rely on casting noncreatures on time. Buddy lands will give these decks more options. Merfolk decks can now reliably cast Spell Pierce, and Vampire decks may play more removal spells.

Fast lands are stronger than cycle lands, so we added land types to the Amonkhet cycle lands knowing that buddy lands were coming, to help narrow the gap between ally and enemy color mana bases. Amonkhet's cycle lands become stronger now that we have all ten buddy lands in the format. Each cycle land enables three different buddy lands. A turn-one Irrigated Farmland can enable an untapped Hinterland Harbor, Glacial Fortress, and Sunpetal Grove. This stronger mana base could enable some innovation in decks like Approach of the Second Sun control. For example, here is a Bant Approach deck by Magic Online user coteca83 that recently went 5-0 in a League.

4 Cast Out 3 Gift of Paradise 2 Search for Azcanta

3 Authority of the Consuls 1 Silent Gravestone

4 Approach of the Second Sun
46 Cards

The mana in this deck is fine, but relies heavily on Hour of Promise and Gift of Paradise. With Hinterland Harbor entering Standard, this deck could evolve into a more controlling, less rampy deck that can more reliably play Search for Azcanta on turn two. I'm looking forward to seeing what players brew up now that they have access to stronger mana.

The next card I want to talk about was previewed earlier this week at StarCityGames.com. It has an off-color activated ability that requires players to plan their mana bases accordingly, so I thought this would be a good place to dive deeper into its design. Let's look closer at Shalai, Voice of Plenty! 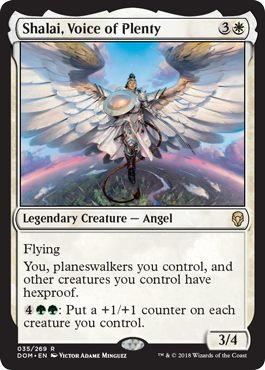 If you are familiar with my column, you'll know that the one of the Play Design team's goals is to create cards that solve certain problems. Shalai was meant to be a strong midrange card for white decks, or a curve topper for aggressive white decks. Mono-red aggro has taken up a large portion of the metagame, and this card is a good way to fight against it. It survives Lightning Strike or Abrade, it has high toughness that makes it a good blocker, and it protects everything else from burn and effects like Earthshaker Khenra. Best of all, you can't be burned out by targeted removal.

This was a card that started out as a 3/3 in set design, and it only had flying and the text "Other creatures you control have hexproof." It was not a very effective answer against red decks due to its low toughness and dying to most removal spells. A fourth toughness was added to line up better against more of the creatures and removal spells in the format. Additionally, this card was not doing its job as a midrange threat. It just didn't do a lot and had a huge target on its head. We needed to find an ability that made this card go over the top against other midrange decks, thus the green activation was born.

So what can you do with Shalai? The most obvious answer is play her with Lyra Dawnbringer. Both cards are individually strong on their own, but when on the battlefield together they total 9 power worth of lifelink. Take that, mono-red!

Another thing that the Play Design team thinks about when designing cards is how to boost other cards that aren't getting much love. The activated ability on Shalai is a great mana sink, and can be game-winning if you're going wide. That said, six mana is a lot, and if you are activating this turn after turn, you are usually only winning more. However, if you're playing a green-white go-wide token deck with Growing Rites of Itlimoc, you can have some pretty explosive turns. One downside of Growing Rites is that it transforms during your end step, and you often don't have a use for the mana during your opponent's turn. With Shalai in play, you have something worthwhile to sink that mana into.

Green-white aggro decks are not very popular, but they do have a small percentage share of the meta. Here is a list by Magic Online user pepeisra that recently went 5-0 in a League.

With Shalai, Voice of Plenty, we may see this deck evolve into a more midrange deck that plays a higher creature count and utilizes Growing Rites to make lots of mana.

That's about it for Dominaria previews from the Play Design team. I hope you enjoy the set. Next week I'll be back with more Dominaria insights from Play Design, and M-Files: Dominaria Edition will follow soon after.